Okay, so along with figuring out a way to avoid buying a large number of outlandishly expensive sand anchors for a frame-less and floor-less tent as I reported recently, I’ve got yet another new trick to try. Cooke’s Custom Sewing (CCS) has some of the nicest poles for tarps that you can get (which I also use with the “Lean Plus” tent when convenient trees aren’t around), but I decided that I wanted to simplify the method for attaching an anchor line to the top of this style of pole. These poles typically support a tarp (or the CCS “Lean”-style shelters), by placing the pole close alongside the tarp or tent at the location of an anchor line or support line, then running that line over the top of the pole, attaching it by knotting a very small loop into the line. I commonly augment that system with a short drop line that anchors to the pole itself with a series of wrap-around half hitches in cases where the line might lift in strong gusts of wind, so the line won’t pop off the top of the pole. This is a decent system, but it can be tedious if one wishes to change the locations of those tiny pole-attachment loops on any of the lines, especially if one is in a hurry. I’ve thought about using just a “twist loop”, but most people use a loop made from an overhand knot on a bight, and that’s what I’ve always done as well. No disrespect to those innumerable north-woods canoe-campers who swear by this system, but today I thought of a method whereby the line can be run through a structural loop at the top of the pole and wrapped a few times, being totally secure with just three or four seconds worth of effort. I rigged up this modification for all six of my CCS poles.

I took a very small “chain link”, the kind with a screw-shut opening, and welded it to a bracket that slips over the top of a CCS pole. The bracket is something I happened to have on hand, the base plate of a standard U-bolt from the hardware store, bent into a hanger shape (I used the U-bolts on several of my boat hoists years ago, but I had no need for the base plates so I saved them figuring they might come in handy for something, eventually). I wrapped the brackets with tape to eliminate all steel-to-aluminum contact (just to be fussy), and anchored the hanger to the pole with tape as well. For those with a fussy eye for detail, the bend in the bracket is intentionally greater than 90 degrees to avoid having “wobbly” bearing on the little bead of weld that surrounds the pin at the top of the pole.

It seems I almost never do a project like this without making a mistake. I thought I had succeeded this time, but no such luck. I intended for the screw nut to move upward when the link is opened, so that a line can quickly be wrapped a few times around the lower U-shaped part of the opening when the link is open, without the nut being in the way. Wouldn’t you know it, but on one of them I attached the link upside-down. It’s in the second photo, that one that’s fully attached to the pole (obviously this is a mistake that’s not worth “fixing”).

The first photo below shows the method of construction for the brackets. The other photo shows: 1, a bare pole; 2, how the bracket hangs from the top; and 3, the connection fully padded and secured. 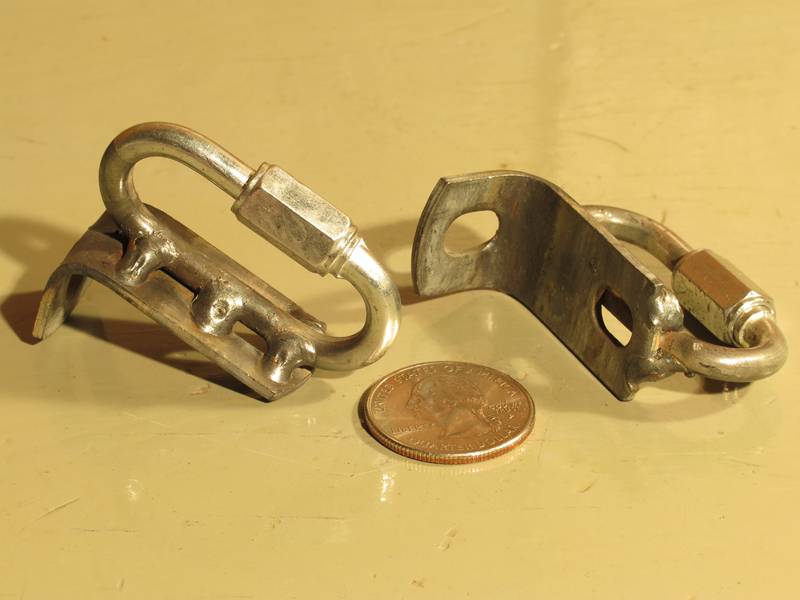 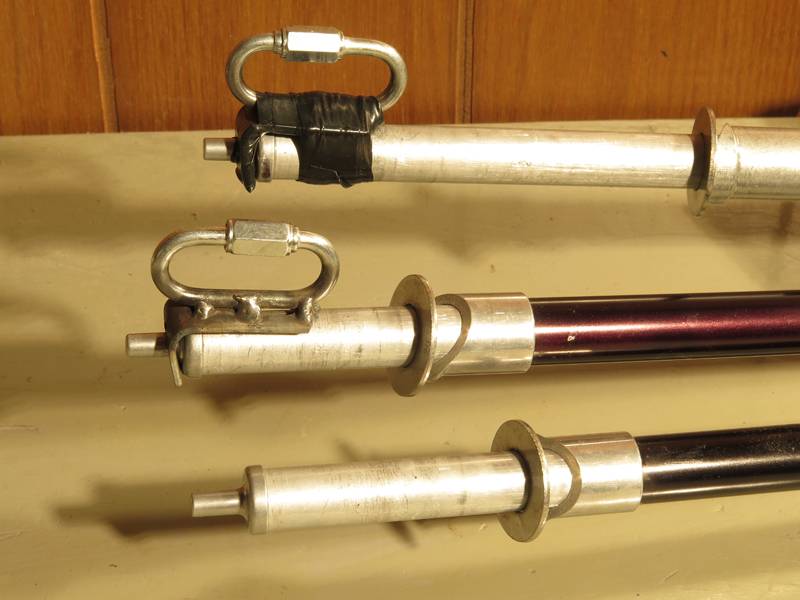 Welding? Wow, that’s an extreme for camping gear I can’t go to…But hey, more power to you. Looks like it should work…