I just bought a Honda 2 hp outboard for my 16’ Old Town fiberglass canoe. The tiller on this outboard can be rotated 180 degrees, so it can be controlled from behind, so to speak. Given this, I’m wondering if it would make sense to mount the outboard slightly forward of the stern seat and steer from behind?

It would make for slightly easier steering (once I wrap my brain around the reversal) and would also move some weight forward a bit.

Has anyone ever done this?

Mounting an outboard forward of the rear seat…

Where? How? Kick up? Why? Registration paperwork (motor often means it must register) ?

Putting the motor that far off center is going to make it handle very poorly, to say the least. Plus that part of the boat is definitely not designed for that type of stress on the gunwale

Ah, good to know – those are points I was pondering. I wouldn’t be moving the mounting point much farther forward (probably 12" - 18"), but if the boat is stronger farther towards the stern then that’s definitely a consideration.

Well, the stern is much narrow and at the convergence of both sides. It is a lot stiffer and stronger than the side of the boat near the middle

How would you counterbalance the motor and what would you mount it to? Dry weight is 27 lbs.

Also would put you aft of the exhaust…

Outboard mount on the gunnel is not advised forward of the rear seat. It puts a turning moment being further outboard of the centerline than in the stern section. Intensional steering is also hampered the closer to admidships.

You may note that fishing kayaks often mount a power motor, primarily electric, forward of amidships in a well. You could do that but steering would need to be by rudder at the stern. The motor would have to kick up when hitting things. Too much effort to modify boat. Some net boats steer with outboard up forward but it looses effect.

Note…my Honda 2.5 hp air-cooled 4 stroke is not quiet at cruise. I wouldn’t want that in front of me. It also spits some smoke at start after being kicked up, ie out of water.

Guess I’d have to counterbalance with another 2hp on the opposite side. Might as well load as much HP on this as possible? Just kidding and good point about the exhaust, I hadn’t considered that.

On a local reservoir boating rules allowed only electric motors for boats that are not manually powered. One time I saw a boater that had attached 8 electric trolling motors to his johnboat. I slowly passed him in my kayak, much to his displeasure.

My family had an old 23 foot sailboat when I was growing up. It had a pretty long overhang at the stern that would cause the propeller of a stern-mounted motor to come out of the water in rough water, so we mounted the outboard on the side next to the cockpit (couldn’t afford a long-shaft motor to replace the used clunker we had). The side-mounted motor worked fine as the sailboat’s keel kept the boat moving forward, even with the thrust way forward and off center. But I think a canoe will tend to want to move sideways with a setup like that since there isn’t really any keel at all.

I would have loved to see that!

Wolf…Lynn and Larry Parade used to row their 20 something full keel sailboat with one oar. A sail boat has surfaces that resist turning forces. Try that with a canoe.

Jgold…you have the motor and canoe do it and report.

Here’s the boat but I don’t have any photos of the outboard mount. Lots of keel there. You can also see an offset propeller shaft for an inboard engine and we eventually did get a one cylinder inboard. 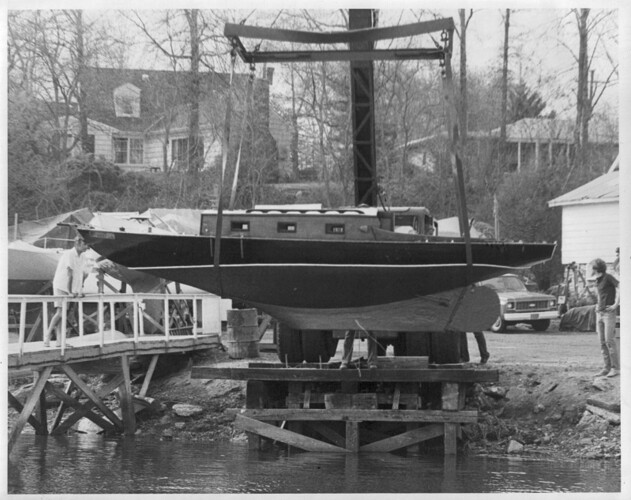 Absolutely – as soon as the ice is off the river! I’m in Maine, so there’s a few weeks to go

Ran the motor today in a bucket – works like a charm. Just have to work on a mount.

The best solution for stability would be an outrigger setup. You could mount the motor on the rear support arm for the outrigger placing the thrust between the canoe and the float. That would stabilize the handling.

If you wish to forego an outrigger the next best solution would be to mount the motor on the bow and steer from the aft as normal, compensating for the off-center motor.

Finally got a chance to try out my honda 2hp and I’m pleased to say it works very well. I mounted on the stern using a homemade side mount that’s a little wider than the standard - - I wanted to give it as much support as possible to avoid flexing the gunwales.

I’m able to easily counterbalance the motor’s 30 pounds by shifting slightly in the seat. The whole setup seems reasonably stable, although we didn’t go particularly fast, nor did we encounter rough water.

There were no issues steering and it tracked nicely – I could set the throttle and point the boat without touching the tiller. It was easy to pop the motor up in order to explore shallow areas.

The motor’s a bit noisy and someday I’d like to replace it with a Torqueedo. But until prices of those come down, this will do nicely.

Yes, I had a similar setup on a Doughdish - the boat would pivot for a second or two and then go straight. Of course, deep keel, heavy displacement and a rudder up against 2 hp was not a fair fight. It was LOUD though, and the little 2 hp Honda didn’t have neutral, so when it was on, it was on! We quickly learned to just sail everywhere and eventually left the stinky outboard ashore.

I’ve got a similar rig; 17’ aluminun canoe I put a 2.5 hp Suzuki outboard on. I got the Suzuki because it was the lightest and cheapest. I did make a home made mount, but it supported the motor too high. I re-inforced the store-bought one with aluminum strips because it seemed a little weak for a gas motor. I mount the motor right behind the rear seat and it works well. If I am solo I need to add weight to the bow to keep it down. I can get out of an empty canoe and the motor does not tip the canoe. I used to off set the weight but found that I dont need to. I guestimate that I’ve had it going over ten mph.