Names of Rapids That Evoke A Higher Power

" The approach is long and rocky and toward the bottom there are huge and powerful standing waves as the Obed River is constricted to 15 feet by a rock encroachment, pitched over a five-foot ledge, and propelled against OhMyGod rock abutment which protrudes from river right."

You really have to see this rapid, or better yet run it, to understand why it gives so many people trouble. Not only is the river flow highly constricted at the bottom, the entire river bed from top to bottom of the rapid tilts to the right making it very difficult to stay as far left as you would like. 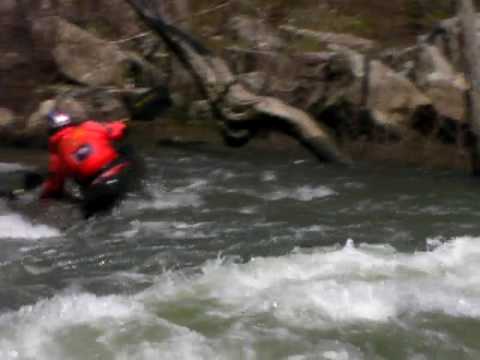 But I think there are far more rapids with names that evoke a Satanic conotation.

Hey Pete, interesting you shared that video and description. I’ve had two “scary” swims. More scary for the folks I was paddling with who witnessed them than for me doing the swimming…but I knew it was serious. Neither of these swims is something I’m proud of or lookin’ to repeat.

Years ago I swam hydroelectric (Chattooga - section 4, five falls- jaw bone) peeling out of an eddy to low on my offside in a c1. Alls I can say is I went into and then through the rock and “I swam for the light!”

I think the other swim is the rapid you shared in the video. It was definitely on the obed river at high flow. I was squirt boating and after stern squirting out of a ledge hole out of control I got shot hard right and ended up rock splatting . I sank down deep stern first on the face of the rock. Things got dark and quiet and then completely still. I pushed out hard. The boat was pinned, totally invisible well below the waterline. I’m thinking my thoughts were more “Thank You God” rather than Ohmigod (Sehlinger and Lance’s spelling for the rapid in their guidebook) as I resurfaced and started swimming. Hiking back to the put-in, finding a way through the cap rock canyon, wearing someone else’s oversized booties was memorable as well.

I did get the boat back months later. After the water dropped some folks ping ponged the boat to the takeout and looked me up.I sold the boat and never got in a squirt boat again. I honestly never new or remembered the name of that rapid but I am thinking your video was it. Igot out the old Tn guidebook and that rapid makes the most sense. We did scout the rapid first so we weren’t completely crazy. Running new to me stuff at high water wasn’t that unusual for me in my early 20s. After my run, everyone else decided to carry the rapid. Funny how that works.

Many times I’ve said this silent prayer to myself on the river: “Lord help me to do my best- stay focused, hit my lines… and thank you for saving my a##, amen” Believe me when I say that prayer was real and heartfelt. You don’t video boat on the Upper Gauley, without health insurance, three youngins at home without sayin’ a few prayers.

As far as satan goes. …doesn’t the bsf have devils jumps, and the maury has hell’s kitchen

and then there’s the rock at the top of sweet falls- it’s only in recent years they’ve sanitized it to “guide ejector rock”…ah political correctness, no room for scare and despair stories anymore, and certainly no room for Jesus . I’m only sorry we didn’t think up booty beers, bear claws, and discover that getting trashed in a hole was playboating. Short boats have been a good thing as well . Credit all that to the new/current generation but dang I miss a good dose of William Nealy humor.

Too bad they don’t make pill that induces a good stiff ender for us old folks . Oops I think they figured that one out too.

Ah yes, William Nealy had it nailed. Several of us still have certain memories filed under “Whitewater Tales of Terror”.

Doesn’t the Colorado (or the Green) have a hole names Satan’s Gut?

My most fervent prayer came somewhere on the Big South Fork of the Cumberland as I was being sucked back up to the pour-over. “Please Lord don’t let there be any wood under there”. Thankfully, it was clear. Just a bit of rather extended downtime.

I said a prayer or two before running the L at some unknown water level…hoping the hole wasn’t sticky. We’d ski jump it. The term boof hadn’t been invented.

This was early 90s & I was paddling with my brother-in-law in a MR Explorer. We had been paddling together for a couple of years and were a pretty decent team. Early days & I was pretty clueless about where/what we were paddling & no idea about the river other than what the purported leader of the trip said. we had a herd of kayaks, a couple of OC1s and two MR Explorers. apparently it had rained over the New drainage but not the Clear Creek drainage so the one guy who had run the river had no idea that the BSF was running ~2500cfs (so I’m told). He basically freaked at the confluence. The rest of us had no clue and were just read/scout/run. Both of the tandems flipped at what is probably Diagonal Wave - too much weight in the bow of a tripping boat to slide over that wall of water. An easy swim there though. Leader froze at Double Drop. The rest of us couldn’t understand why as there was an easy gravel slide or River left & an interesting 3’ ledge between two pillars in the middle. There were a bunch of people on the rock on River right with ropes but most of us had no idea what was there. Took over a half an hour & a 1/4 pack of smokes to get him to make the run. Many of us portaged what was probably the EL. At that level a massive wave with maybe a 20’ face that would occasionally collapse. The prayerful swim was either at OH Sh*t or at the top of Kreckels looking at AW. I know that there was a fairly long fast pool after the backwash from the pourover & the next rapid. When I popped to the surface I was never so glad to have a rope land on me.

I never had river levels dialed in during the 80s. For one thing they weren’t available online. So we would just go. If things were high and brown we often thought twice but we always ran something. Sometimes a different stretch of river or a smaller trib. We had the physicality to get away with it most of the time. Occasionally things would get out of control and we would pull off and develop an exit strategy. My favorite runs in the BSF drainage were on the clear fork and its tributaries. One I remember was white oak and I can’t remember the other. Crab orchard creek was another one we ran. Even then I preferred the smaller more intimate streams.

In the Obed-Emory watershed I thought clear creek and white creek were the gems. We scouted Daddy’s but never got on it. It kind of had a reputation back then and we weren’t hooked up with the local TN boating scene. So we weren’t completely wide open and showed some restraint at times.

Not really having the water levels dialed in on the BSF, I always wondered if some of the ledges/drops would get retentive at certain water levels. Many years later I read an accident report and watched videos of some scary stuff. I guess my instincts weren’t totally off.

Canoeing, we pulled the plug on white oak creek in Ohio, it was getting out of control. We shouldn’t have canoed above Cumberland Falls KY but we did anyway- really sketchy at the takeout with huge standing waves you had to cut out of. The waves were leading to a massive rapid that included the falls.

Kayaking I’ve walked off both the upper and middle meadow. I’m willing to roll the dice more with rising water if there is a vacant railroad grade to walk out on. Self preservation is a skill. I had enough sense to cancel a first time run down the russell fork gorge on what became known as bloody sunday.

A particularly bad combo is high water and rapids on a small creek that has wood in play. I like to catch the small streams when they are dropping out. Water quality is better and the streams are more predictable.

Yes I imagine that swimming hydroelectric rock might be a mind-altering experience, Tony. Memorable but not recommended. I pretty vividly remember getting so violently backendered in Soc-em-Dog that I thought I was going to get looped back into the hole and thoroughly chundered.

The rapid that gave you trouble in the Obed Gorge was almost certainly either OhMyGod or Rockgarden. Rockgarden is a bit downstream of OhMyGod and those two are by far the most notorious on that stretch. They both also have a very stout push to river right with big splat rocks near the bottom on river right. But of the two, Rockgarden is probably the more dangerous as it has a rock with a funnel-shaped undercut at bottom right.

Monte Smith tells a story from years past in which the legendary Dick Wooten swam Rockgarden and his Blue Hole OCA disappeared into the undercut. He walked into the woods and returned with a 9 foot long log with which he was eventually able to pry the canoe out.

Here is a video of some guys running Rockgarden. If you can stay left and upright and hit the big eddy on river left near the bottom it is a piece of cake. But note that these guys are working pretty hard to get left and stay left. And they are paddling boats that are actually designed to float on the surface of the water> 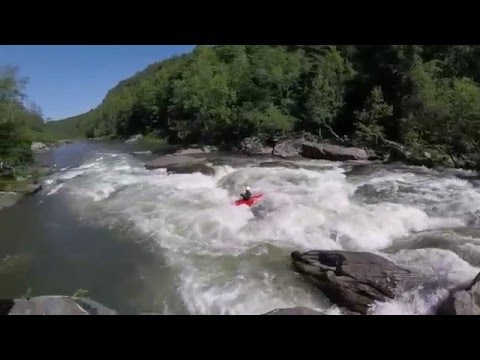 In the NE, Satan’s Kingdom on the Farmington (and there is a Crystal on the Moose).

Yes, Devil’s Jump rapid is on the Big South Fork of the Cumberland River just upstream of Blue Heron mine access.

OK the last is not really a rapid but a rock formation at a river access point.

Its not the names that are so terrifying. I swam Tunnel Chute once on the Middle Fork of the American River a Class V rapid with an odd history. It was blasted out of the rock in the Sierra Nevadas by miners in 1889 and changed the route of the river. It is a long aerated sleigh ride to a dark green hole with an enormous maytag. It was later around a campfire I learned that there was still old rebar sticking out of the sides of the chute. The things we did when we were younger.