Saw this last night quite a few news stories, what say all.

As a side note the news show I saw said the facts show higher rates of drowning in Native Americans not lower.

According to data from the Centers for Disease Control and Prevention (CDC), Native Americans have the highest rate of drowning among all racial demographics.

That is one of the most bizarre things I’ve read recently.

Native Americans lived and still live in a huge variety of environments across the Americas. Not all of them know water well.

If the goal is to remove the barrier of needing to buy PFDs just to go boating, a better way to do so while lowering the risk of drowning is to provide loaner PFDs at popular launch sites! These are provided at some places for children, so why not others who might not have a PFD? This might include a paddler who forgot to bring his or her own!

Yes, I am sure the Cheyenne Indians, or the Hopi, could pop right into a boat and execute an Eskimo roll while harpooning a seal.
Sheesh!

I wonder if it is like the casinos if you are 1/32 Native American you are good to be an owner. My dad always told me I was 1/32 so maybe I can swim in ice water and have never tested it.

so true, I had a friend who became superintendent of schools- a largely political position, I didn’t know if I should congratulate him or give him my condolences

On pfd use, I’ve always maintained the use is cultural. More about perception than reality. Many groups feel like they should be exempt- “we’re athletes, we’re locals, I don’t plan on getting wet, what we’re doing isn’t serious, I’m a great swimmer”.

My sister and a friend (full blooded native American) evacuated the MS Gulf Coast to my house in Neptune Beach FL (Jacksonville) before Hurricane Katrina hit. As Katrina was a daylight landfall, it was all over the news and severely depressing. To get the girls away from the TV, I said, “come on we are going for a boat ride and swim”.

My sis’ friend would not step foot on my 17 ft center console boat UNLESS she could wear a PFD…I gladly complied with her demand. We had a great few hours boating to and at Bird Island in Nassau Sound.

It’s not so much this as it is each member is influenced by a particular group or groups that is contributing to their campaign or sending them letters. With any luck a bill can eventually pass without this nonsense in it because most of the reps are not being influenced by the… not even sure what lobby, the fish lobby? Fish can certainly claim eons swimming in water.

OK yes in this case there is a measure of idiocy involved.

I have to wonder if there isn’t some unstated politics of “tribal sovereignty” that might be involved. It might be that there’s a desire for the state or some federal agency not to appear as if they’re “micro managing” the affairs of tribal members - perhaps thinking that such issues might be better left to the tribes to regulate? I know here the fishing, hunting, and wild rice harvesting regs are different for tribal members and there has been some contention over such issues between the tribes and the govt. It might be similar to the way different states are allowed to set different boating registration rules. There are likely volumes filled with what I don’t know about treaty rights and government involvement in tribal affairs, but I have to wonder if something like that isn’t involved.

Would be surprising if the bill passes as written. At any rate, here’s what it states (in part):

(b) The following persons are not required to wear a personal flotation device as required in (a) of this subsection:

(i) A person operating or occupying a squirt boat that is designed solely for the activity of squirt boating;

(ii) A person participating in yoga on a stand-up paddleboard while within a designated swimming area or within 100 feet of shore;

(iii) A person on a stand-up paddleboard who is wearing a leash that connects the paddleboard to the person and is in compliance with the requirements for personal flotation devices on board and attached to the vessel as provided in 33 C.F.R. Sec. 175.15;
(iv) A person operating or occupying a kayak, canoe, or stand-up paddleboard as part of a sanctioned competition as recognized by a national or international racing association;
(v) A person who is a member of a federally recognized tribe;

(vi) A person operating or occupying a kayak, canoe, or stand-up paddleboard as part of an event organized by a federally recognized tribe; or

(vii) A person operating or occupying a kayak, canoe, or stand-up paddleboard while under the direct supervision of a coach or trainer.

This is why people hate the government. A PFD requirement is annoying and intrusive, even if well meaning. Its selectively enforced. Then they exempt one of the groups that would be most helped by it because swimming is…in their DNA? and also they are not affected by cold shock? Huh. Wish I had more native blood. Then I wouldnt need a wetsuit. 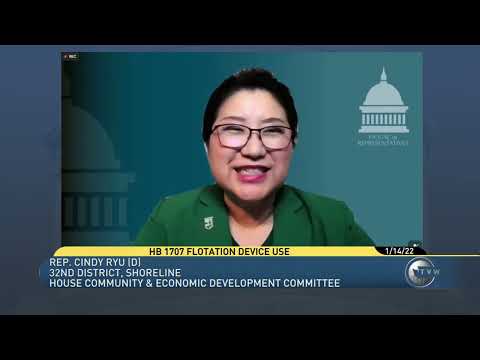 With the exception of a Type V PFD, this goes a little farther than what the USCG requires. The USCG only requires that an approved PFD need only be readily available in most cases.

Personally I would have no problem if people were required to wear one. I never kayak without wearing one.

With the possible exception of boating on a reservation for possible legal reasons, the native American exception makes no sense to me.

I like the part where she admires the “bravery” of those who SUP. Living on the razor’s edge for real, those SUP users!

Before anyone gets too excited about any of this, the question should be–who is going to enforce these regulations? I always wear a pfd while paddling, but what about swimmers? Who is more likely to go under–an experienced paddler in or on his craft, or a half fast swimmer who thinks he’s half fish?

The enforcers can’t, or don’t enforce most of the laws anyway At some point people have to look out for their own safety and well being. The opposite will likely eventually lead to the loss of every freedom to overzealous lawmakers who don’t know when enough is enough.

On review of the cite from Rookie - for the most part this just makes a PFD requirement year round. This is something that the Coast Guard has been asking state legislatures to do for over a decade. Because they would rather not be fishing people out of the water - or recovering bodies - May 1 thru Oct 31. That is the window where many states remove the PFD requirement for adults.

So to me this story is a lot less about the PFD requirement than the astonishing jingoism in the attitude of this legislator. And from a state with a Native American population to boot. The fundamental bias here is godawful.

It only gets worse when you attempt to follow her logic trail in this quote. I am fairly sure that there are no signs barring Korean Americans at the state’s boat launches.

" The Democrat representative added that the provision “was a great mechanism to allow the tribal members that do have a lot more access to the waters and traditional training and activity, unlike many of the other diverse communities that don’t, like Korean Americans,” Fox News reports.

“The only time I go out on the water nowadays anyway is when my non-Korean American son-in-law takes me out on the water,” she continued. “And so I thought that was a good way of carving out very narrow exemptions.”

When I paddled the Yukon River, a local First Nation guy said that most people he knows do not ever learn how to swim. The water is just too cold all year. And the river carries so much suspended silt that if someone falls in. their clothing and pockets collect so much heavy silt that there is virtually no hope of self rescue unless a PFD is worn.

There seems to be a common belief in the North, by Native Americans that going in the water is going to cost you your life. Few learn to swim, few wear PFDs. They are fatalistic. Falling through the ice on a river is the worst., followed by really cold moving water.