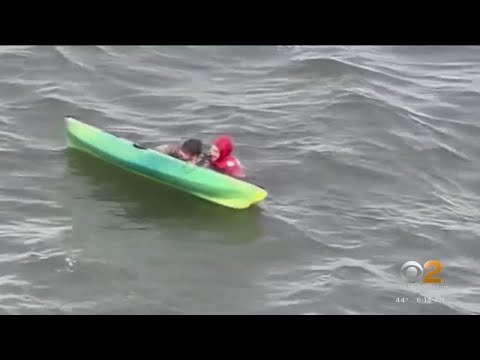 Yeah, much safer to photograph the birds.

No clue what these people think. Tiny kayak I wouldn’t take out on a calm summer day. He’s not a small size guy.

Kudos to the paddler for being willing to be interviewed. It’s a good lesson for others… Hope he knows he is oversized for that kayak…

I used to have a similar sized kayak and its fine on a calm summer warm water day.

I bet he was glad he had that lifevest on

The coverage on another challenge mentioned he was duck hunting. This seems odd because I don’t think our NY regional regs allow you to hunt on the water like that…this coverage said he was retrieving a duck…maybe he shot it from land and then paddled out there. Either way, he’s lucky.

I have to say it’s folks like this that give other kayakers a bad name; guilt by association. I had to endure some smart ass comments at work today because of this guy’s poor decisions.

Well it’s like a drunk driver, they can’t blame me if I drive. Guy was uneducated fool at best. At worst his bravado was at it’s max. Glad he’s alive hopefully he educated some others about the dangers.

. Took off his PFD to increase his movement? Omg