Just picked up a Necky Dolphin that I had bought earlier in the year and a friend, who also picked it up, has been has been holding it.
It needs overhauling and I have a few questions for anyone that’s familiar w/ these particular kayaks.
First off I believe that the cord/rope(?) that they have on the rudder is not stock and possibly not routed correct. Are both lines supposed to go under the pad eye at the stern? And the rest of the routing?
The pad eyes around the seat area, especially on the left side, are a bit confusing.
Also what are the pad eyes around the foot area for? And I see that some are riveted on and others nut & bolt. Any reason why?
I also see that the holes that the rudder control wires run through are open to water intrusion, is that normal?
I’ve tried finding catalogs and/or info on the Neckys and it seems pretty thin out there unlike the other yaks I have or have overhauled.

Thanks for any info.

If I remember the Dolphins were discontinued some time ago. Long ago I paddled several dolphins and I don’t remember one having a rudder. It’s likely someone added the rudder ad hoc. Best bet would be to post a picture of where the cables routed. Same with the padeyes. Someone probably added them at different times , some with nuts and bolts where they can reach inside and some with blind rivets where they couldn’t reach. The padeyes may be for leg straps, again a picture would be helpful.

I agree photos would be good, as i am also going on memory on the boat.

The pad eyes by the feet might be for thigh braces. A brace would attach there and also back by the seat. One set for each side.

The ones that are nut and bolt are likely stock, or in places where the backside could be accessed (like near a hatch). The riveted ones are likely aftermarket in spots they couldn’t access the back. Riveting is not known to be a secure way to attach to plastic boats.

Totally my bad, I intended to post pics and even have them already . . . guess I was doing too many things that morning. 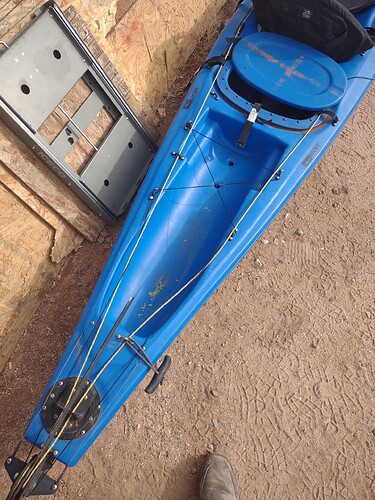 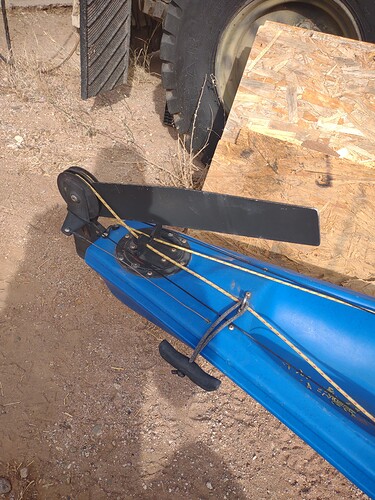 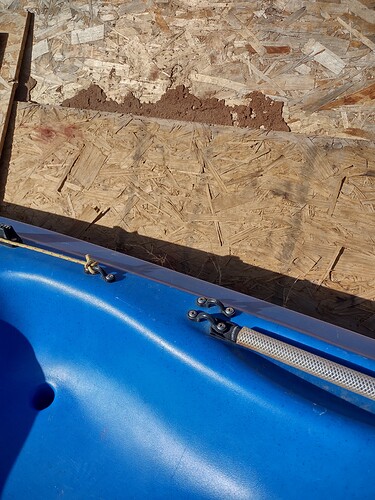 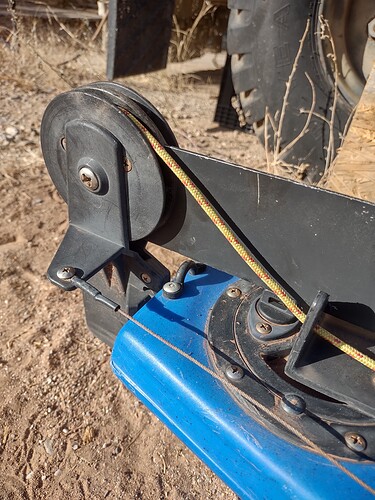 Pad eyes near the feet, 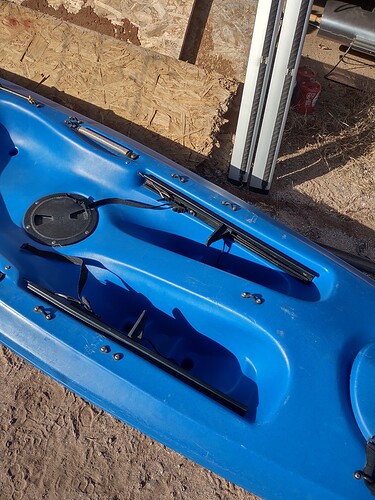 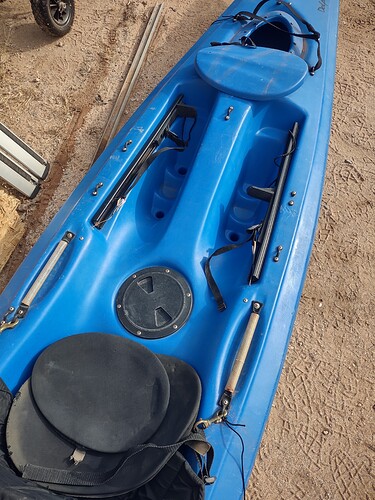 I can easily get more if better/closer views are wanted.

A factory installed rudder was an option with the Dolphin, but looking online it seems that few people paid for the option. The rudder looks identical to the rudder on my 1999 Arluk 1.9.

Rudder cables are typically encased in tubing from where they enter the hull by the rudder to where they exit in the cockpit to prevent water from entering the hull.

The rudder assembly has Necky molded into it. So it does seem like whoever had it was one of the few.

It looks like a factory rudder that someone replaced the up/down line on.

I think that, originally the loop of rope only went to one side. If you return it to that tie a few inches of bungee into the loop. That will allow to keep the loop tighter.

It does look like the pad eyes that are riveted are the ones in places that can’t be reached.

So after taking the rudder apart and putting it back together several times (I think I might be an expert at that now) I got the drop line adjusted and added some shock cord scrap that I had.
I think I got it run correctly after hunting up online photos of such. I personally have never had a ruddered yak or worked on one.
Eventually I’ll replace the drop line as this one has some stretch to it and would rather have something like deck line that doesn’t have much, if any. 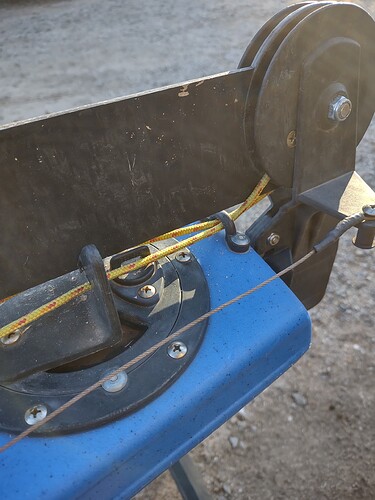 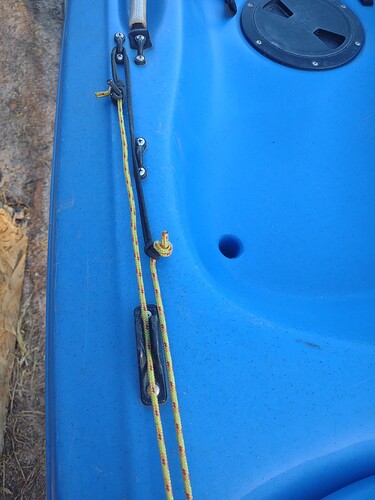 Hi. You might call lands end dealer in Maine with a call, they are very informed and may be able to help.

My wife has a Necky Looksha IV with a similar rudder setup. I have two comments:

I’m not sure where you are going to be paddling your dolphin, but they were quite popular with coastal paddlers and good for surf launches and landings. They were also a bit tippy and the thigh straps were great for giving good control and stability. I don’t think rudders will work well with thigh straps but I could be wrong about that. If you are using the dolphin for surf and beach launches makes sure you flip the rudder up long before you enter the surf zone. I watched a few rudders get really messed up when novice paddlers on a trip to Todos Santos Island in Mexico tried to land in much higher than expect surf without raising the rudders. The rudder you have looks quite long to me for how low the stern sits on a dolphin but maybe it’s just the pictures and I am no expert at rudders on sit on tops.

It’s going to be my mom’s yak for when she comes to visit, as she can’t get in and out of sit-ins. She has a few shorter ones out east but needed one for when she was visiting. There is not a chance in the world that I could get her to launch into the ocean.

So it will be for river and lake camping w/ us.
Of course I’ll also use it for friends that might want to paddle w/ us at other times.

I’ve heard that they can feel a bit tippy at first and I’ll definitely take it out a few times to get the feel of it before she ever makes it here. W/ the seat base being more than 4" above the bottom I can image it could have a high center of gravity. Hopefully w/ a load of gear in it it will be less so.

The rudder deployment line is typically non-stretch. The rudder is only cleated when in the parked position to keep it down and when in the rudder rest and to keep it from swiveling. When deployed the deployment line is free allowing it to kick up if it hits a submerged object or when landing if you forget to retract it. There is still a chance of damaging it if the boat is swept sideways when landing when deployed, but this is less likely than with a skeg.

Is it ever used to keep the rudder from being all the way deployed? Or is that not something that is done? Kind of like when you only put the skeg part way out.

Due to the position of the rudder all the way at the stern, I’ve never heard of it being only partially deployed. The rudder, while designed primarily to counteract the effects of crosswinds, can also be used to steer the boat. A partially deployed rudder is at increased risk or being out of the water at times in waves. The angle of the rudder is what is used to prevent weathercocking or leecocking.

A skeg is normally located more toward one third of the way forward of the stern. It is better positioned, depending on the degree to which it is deployed, to change how it counteracts the effect of currents and crosswinds.

A few surf skis, where the rudder is integral to the hull were designed with a drop down component in the rudder to counteract the tendency of the rudder to be out of the water at times in waves, but could be retracted in flatter water to decrease drag.

Over the edge rudders tend to cavitate if not fully deployed. That means that they pull air bubbles under the back of the boat and create lower flotation and drag.

Epic did that strange integrated rudder and found out it made the boat horrid in anything bigger than a boat wake. The adjustable;e skeg they added almost works, but not as well as an under-hull rudder or skeg, that are more forward in the boat and can also help with stability.