Did anyone here know Ned Sharples, former owner of Canoesport in Ann Arbor? I know he retired quite a few years ago and is no longer living. Where did he go after he left AA? How old was he when he passed on? Was he active in paddling after he left Michigan?

I would be interested to learn about Ned. He sold me a Mitchell paddle years ago in Traverse City at one of the dealer demo days up on Glen Lake, and later I bought a Sawyer canoe that came through his shop.

Ned moved to property he had on Cedar Key on the gulf side of Florida.

Ned
was a friend of mine. He did remain active in canoeing, but as a paddler, not a retailer. What a wonderful guy. We spent time with him near the end as a succession of friends went to Cedar Key to aid in his care as he succumbed to cancer several years ago. He was positive and even busy outfitting a small power boat right up to the end. Though I wasn’t there on his last day I understand he was able to get from his bed, outside to the porch for his time to pass. If you knew Ned that is about as comforting a thought as one could have about that situation. He loved the outdoors so…

can’t believe
only CEW and I replied about Ned…there must be some other folks here who knew him…hello out there???

Ned Sharples
He was my neighbour for a while near Comox BC. He liked birdwatching too.

Ned's shop, Canoesport in Ann Arbor, Michigan, was, in the early days of solo canoeing one of three Meccas, along with Blackhawk Canoe in Janesville, WI, and Curtis Canoe in Hemlock, NY.

Ned was the most even handed of the three because he didn't manufacture hulls, although his manager, Ron Sell, did some fancy trim work on Sawyer hulls.

Canoesport hosted a spring event on the Heron River that was a mainstay for the industry in the late 80's and early 90's. 'Many fond memories of ned and his Golden, who got along wonderfully with my Chessie Brandy.

And Ned moved to Cedar Key and died, and the world was further diminished.

just missed him
If you know Brian from Canoesport he’s been my #1 paddling partner for many years. I bought a Blackhawk Combi 15’8" from Phil S at one of the demo days that Charlie mentions in 1992 as my first boat. I think this was already just after Ned’s time; not sure.

I have heard nothing but great things about Ned.

Brian could tell many stories I’m sure.

I haven’t seen brian in a while
My brother-in-law worked at CS with him and every once in a while we would meet up for a paddle. Brian hooked me up with my first solo boat. He really liked South Lake in Pinckney Rec. Area as I remember it has probably been a couple years since I have been there; we met Brian and his sister out there one evening.

Brian
Brian is diabetic and has been fighting an infection in his foot for well over a year…almost 2 years now so unfortunately he has been paddling very little, but he has not lost any passion for canoeing.

He does indeed love South Lake…we’d often see Osprey when we paddle there.

We hope to see you on the water.

Ned Sharples
I’m trying to find out about Ned Sharples. I’d appreciate hearing from anyone with information about who he was and what he did. I am a river guide in Florida and, eighteen years after Ned died, I was given a boat he had custom made. The circumstances of that gift tell me he was an exceptional person. I’d like to know more. Thanks in advance. Lars Andersen

I just signed up to post attached picture regarding Ned Sharples from Argo Park livery in Ann Arbor Michigan.

Bronze/Brass plaque is at foot of unassuming bench on walkway. I found it very lovely.

I hope picture post. It is a poem or writing by Ned it appears.

I found this forum searching Google for Ned Sharples. 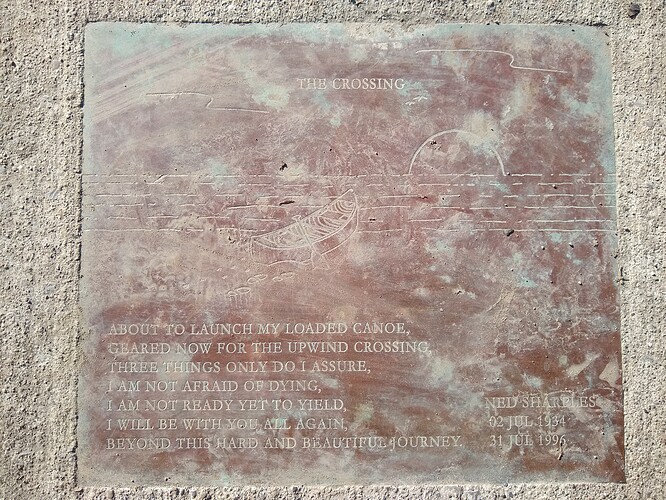