I have a deck mounted tow rope using a kite boarding quick release. Currently the rope pulls on the hatch cover, any ideas how to fix the issue? I was thinking maybe some foam between the pump and hatch to raise the rope out of the way of the hatch. It could also be relocated but then the quick release wouldn’t be in an ideal spot.
Here are photos of how it attaches.
Any advice for a better way to mount it?
Thanks! 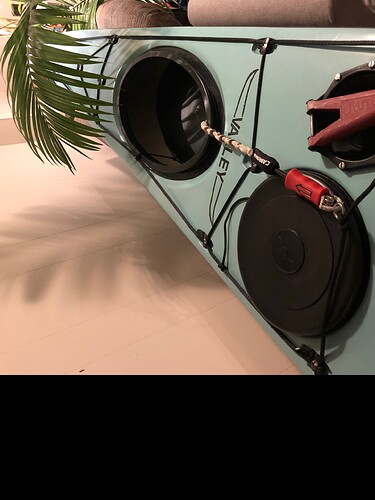 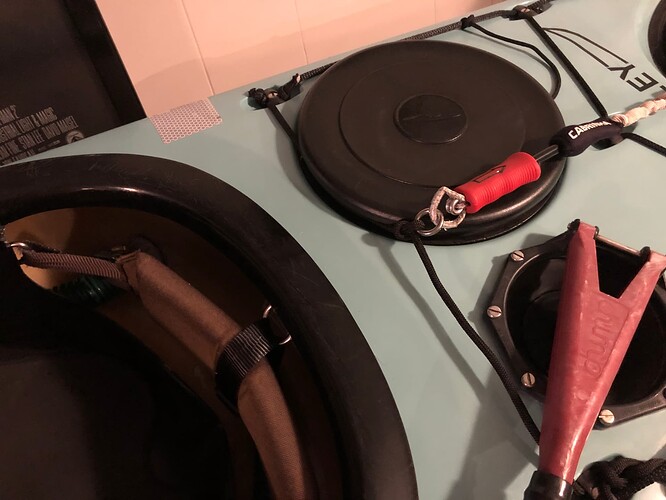 You could use foam or a couple of wiffleballs to raise the attachment point. However, if having to release the tow rig in an emergency situation, especially in rough water, I don’t think I’d want to have to turn almost completely around to release it Could put you in a relatively unstable position compared to traditional quick release tow rigs.

While I usually do turn around to unhook it, with how close it is mounted to the cockpit I can reach it without turning around. To do this my elbow has to go behind my shoulder but not too much. After trying it I find the location fairly convenient and easy to reach with either hand. Also it makes towing way more comfortable than a tow belt in my opinion.

Is it hooked to bungee or line. ?

Is they rope in a open hatch compartment ? …one you do not need for flotation? …what does the line do when you capsize?? …fall out?

I think I will stick to my “contact tow” or the belt mounted tow bag.

I did notice the deck mounted bildge pump. How well does it clear the cockpit?

Deck mounted pump is great, unfortunately I don’t believe they make them anymore.
My quick release is connected to static deck-line. The gray rope coming off of it is a bungee. I don’t actually have the tow rope installed atm but it loops to a ring by my stern and back to the rope behind my cockpit. When I unclip the carabiner behind my cockpit it frees the entire line. Super out of the way towing system while being very quick to use and safe to quick release. Only downside is needing someone else to loop it back in place after use. I don’t use my tow rope often, and in an emergency situation I wouldn’t be concerned with setting it back up, only how quick it is to deploy and quick release.

I sort of like the feedback from a standard tow belt. I’m not clear where the tow line is stored and would hope that it does not compromise floatation provided by the rear storage area. What is required to deploy the tow line?

I’ve almost never had to tow someone more than 5 miles or so.

The tow rope isn’t set up in the photo, I would never have a hatch open on the water. All you have to do to deploy the tow line is detach the carabiner and attach it to someone’s boat. When I get new Polypropylene line I will post a video on YouTube and can link it to you. I am pretty much copying the tow line of Kayakdov.com but adding a kite boarding release

One problem with this type of setup - or your current setup - is that it puts a lot of stress on the deck fittings, which can fail. With your current rig, if one deck fitting fails, the tow line will be out of your reach and you won’t be able to release it.

A better alternative is to mount a fairlead on the aft deck and run the tow line through it to a cam cleat beside the cockpit, on the opposite side from the skeg control.

In an emergency, you don’t want to be reaching behind you for things you can’t see. You’re also likely to be in rough water and taking your hand off the paddle for any significant length of time - like fumbling around behind your back - while you’re getting tossed around by waves, could easily result in a capsize.

Frankly, I wouldn’t use a deck-mounted tow on a boat with a Chimp pump, as you’ve already got a lot going on behind the cockpit. I had one on my Pintail and ended up removing it, as it wasn’t all that effective and was a snag hazard during self and assisted rescues. There’s a reason that you don’t see them on kayaks anymore.

I prefer a waist tow for a variety of reasons, one of which is that it doesn’t require any special deck rigging and the attendant fumbling around behind one’s back.

My quick release is connected to static deck-line. The gray rope coming off of it is a bungee.

Are you saying that you have bungee cord between quick release and your tow line? Bungee cord should never be used as a structural part of a tow rig, as it’s weak and prone to deterioration over time. The only way to use it safely is to have the tow line spiraled around it as shown or have in encased in tubular webbing, which is common in commercial tow rigs. That way, when - not if - the bungee fails, the tow system is still functional. 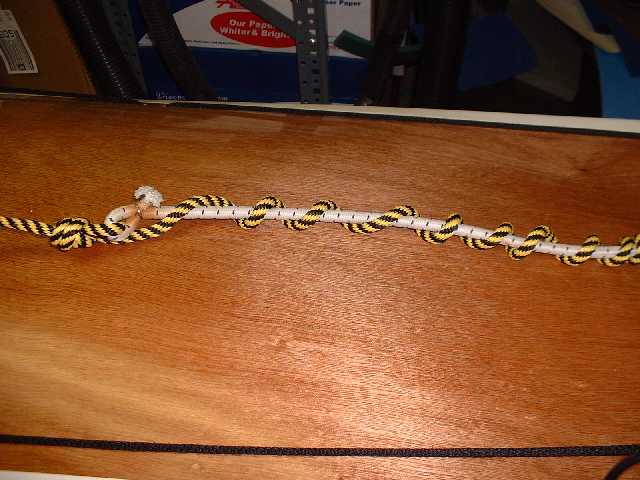 I’ve posted this many times before, her is my deck tow system 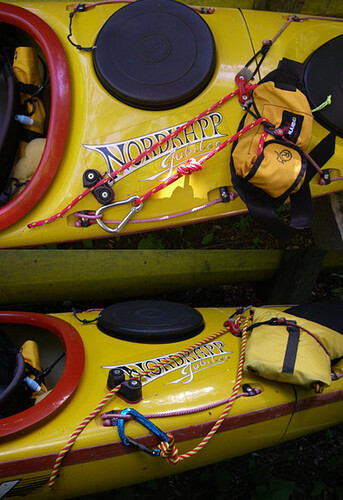 the top picture is using a Salamander waist tow, as the line and can be used as either a waist tow or when set up on the kayak , can be used with the fairlead and cam clete as a deck tow.

Thanks for the pics, Roy.

Thanks for the thorough response!

I do like the cam cleat setup but I prefer a setup that doesn’t involve drilling into the boat. The one thing I don’t like about the tow rope being tied asymmetrically such as in @roym’s case is that when I pull up to someone’s bow or their side, If I am rotated towards them I don’t want to have my rope on the opposite side from where I am facing. Although I do love his setup, especially with how it can easily be put back together. After having my carabiner both on the side mounting point and in the middle I find it easier for it to be mounted in the middle out of personal preference. I think an asymmetrical mounting point further forward by the hips which you mentioned may be better, I haven’t tried it, but it does require some drilling. I also think the kite boarding quick release to be far superior in terms of its ease of releasing which I find more important than the ability to pull rope through the clam cleat.

I took your advice about if single deck fitting fails it will be out of reach. Here is a picture of how I re-tied it in an x, now the force should be distributed a bit better and it has 4 points where its tied. The hatch is still usable. 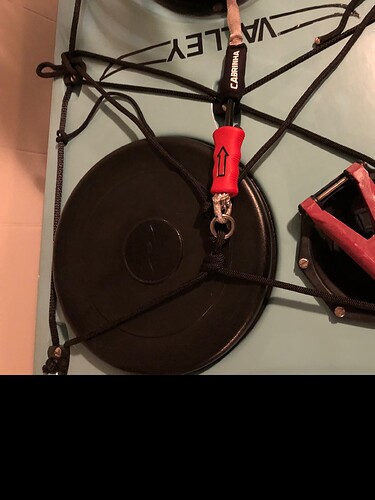 About the rough water and capsizing, generally I wouldn’t be releasing until I am out of the tide race or whatever rough water I am in. Usually if its surf breaking onto shore I wouldn’t use a tow rope at all. My roll has gotten pretty solid so I no longer fret capsizes much.

I also agree the Chimp pump being a potential snag. It is an issue I worry about especially since they are hard to get parts for, but I have yet to have an issue with it. I find it very convenient, the only pump I would prefer more is a foot pump.

The one thing I don’t like about the tow rope being tied asymmetrically such as in @roym’s case is that when I pull up to someone’s bow or their side, If I am rotated towards them I don’t want to have my rope on the opposite side from where I am facing. After having my carabiner both on the side mounting point and in the middle I find it easier for it to be mounted in the middle out of personal preference. I think an asymmetrical mounting point further forward by the hips which you mentioned may be better, I haven’t tried it, but it does require some drilling. 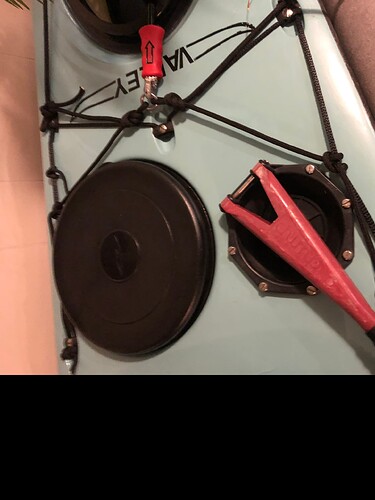 tempImage6iYxT51920×2560 187 KB
Follow up, I found it’s better to tie it like this, with the ropes angles further towards the stern the tension on each rope by the cockpit is reduced