I’m looking to buy my first canoe. I’ve been kayaking a while but looking to get the family on one rig. It’s just my wife, toddler, and myself. Will be used only on lakes for fishing and camping. We’ll most likely be padding 10 to 15 miles per day. I have a budget of $1,500, however, i found two used canoes on craigslist that may save me a lot of money compared to buying a new one.

Would you pick one of the canoes listed below and which one? Second option is buying a new one, if a new one, is a fiberglass Nova Craft Prospector 16 a good choice? 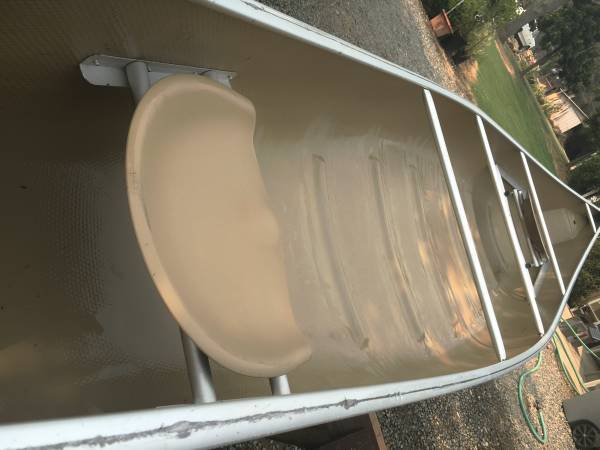 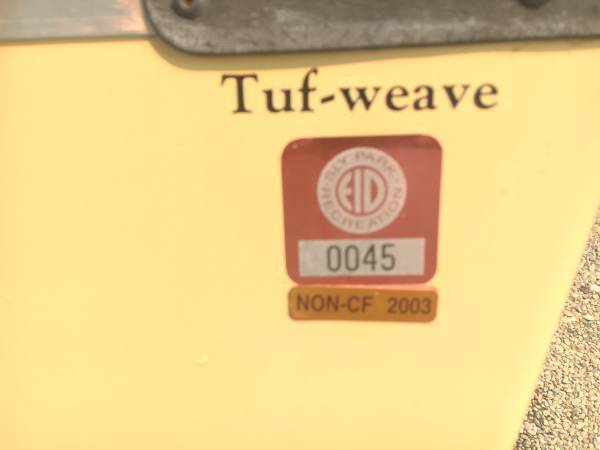 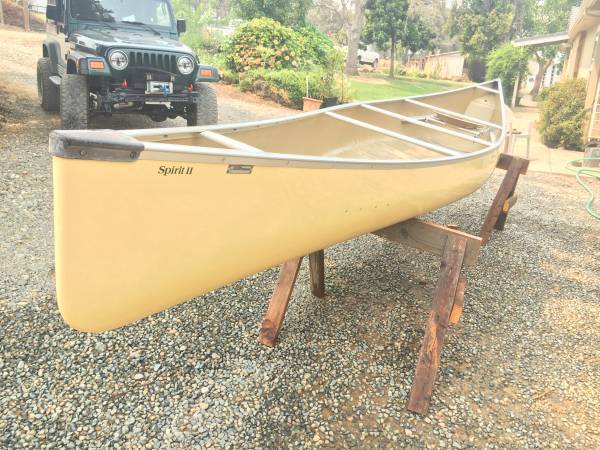 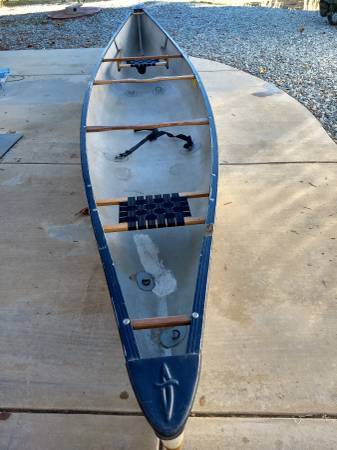 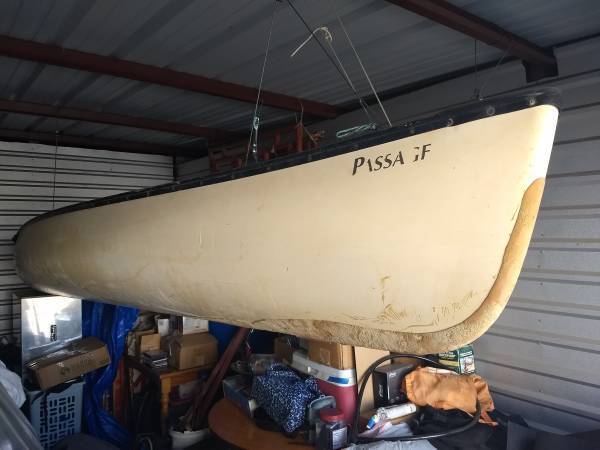 I appreciate any advice. Thank you.

Well, you have two great choices available. The Passage is a great wilderness tripper & this one looks like it has been used as such. I would like to know what is the light colored stain below the bow seat in the picture. If it is in good shape then the price is decent. The Spirit II looks to be in good shape although I think that the price is a bit high for its age. The Spirit II is known as a good all around canoe & I can vouch that the Tuff-Weave layup is indeed tough stuff.

I wouldn’t go new with those two as options however, the NC Prospector is also a fine canoe. I have one in R-Lite that has been down the Goulais, the White, & the Missinaibi.

I agree that a used boat is your best bet, and this is particularly true when you don’t yet know what set of features will make a particular model your favorite for most of the paddling you do. Still, regarding your question on the Novacraft Prospector 16, my own thoughts range from good to "so-so. I have that boat, in “Tuff Stuff”.

I truly love the maneuverability, which is far better than other general-purpose tandem canoes I’ve paddled. That might sound great, but for primarily lake paddling you probably don’t need a canoe that will change heading by 45 degrees in the space of one easy stroke, seemingly because the boat is reading the stern paddler’s mind. Such a boat requires constant attention to stay on course, and for that not to feel a little demanding (perhaps very demanding) may take a good bit of practice. I really enjoy the feeling of a boat that handles that way, but many people would not, especially when still fairly new at paddling.

This boat also has higher sides and ends than most general-purpose tandem canoes, and that does make it significantly more of a handful in windy conditions. On the other hand, the secure feeling this boat’s rounded bottom gives you in choppy waves is nice, so you can take your pick, but truly, the issue with waves doesn’t really become all that important until conditions are quite rough - likely rougher than what most people will commonly be out paddling in. One other issue I have with the higher sides, is that as a stern paddler who has a not-particularly-rugged upper body, I reinforce the corrective phase of my J-stroke by resting the heel of my hand on the top of the gunwale, but in this boat, the gunwale is higher than the most comfortable position on the paddle shaft for my lower hand. Because of that, my power output and efficiency are generally worse in this canoe than in one having sidewalls a couple inches lower.

If those comments make it seem like the Prospector isn’t the greatest choice for you, then the Novacraft Pal might suit your needs better. The Prospector is billed as a do-it-all canoe, but some of what it does well requires it to be a little bit specialized in ways that make it less suited to some aspects of “average paddling.”

Thank you both for your input

The stain looks like it’s a patch. He mentions in his post that it has a water tight repair in the hull. The passage looks like it’s been beat up so I was leaning towards the spirit 2. However, the price does seem a little steep.

For the type of paddling you are talking about, I think the Spirit iI would be the better choice, but either would work. Both would be relatively heavy. The Spirit II in Tuf-weave with cross-rib construction will weigh around 69 lbs. The Passage in R-lite would be about the same or maybe a pound or two heavier.

If I was choosing, I would go with that Spirit II. For lake use only, as you stated, I prefer a good composite hull - which that Wenonah is. Another consideration is if you happen to decide you’d like something else better, the Spirit II is a well-known and popular hull - so would be easy to sell. The price isn’t a steal, but if it’s in top shape, it isn’t unreasonable, IMO.

I own a NC Prospector and use it a lot. I would advise against that boat for a dedicated flat water canoe. I use it some for that, but it’s not the one I choose when there are no rivers in my plans. In fact, I don’t even use it for class 1 rivers, as a rule. It really is best used as a river tripper in class 2 or 3 - but can be pressed into lake service if that’s what you have. Guideboatguy’s comments on that are right on.

Looking at what I wrote, I should add that for a beginner on class 1 rivers, the Prospector is a good choice (as long as no significant wind) - just because of its stability and forgiving nature. I have been lead to believe that the same could be said about the Spirit II, but I haven’t paddled one, so I can’t really compare.

Take $100 less than the asking price in cash. It’s always worked on me.

My vote is for the Spirit. Both good boats but lakes were the OP priority … The Prospector is a time tested river design but can be a handful on lakes.

My wife and I rented a Spirit II for a mulit-day trip in the Adirondacks years ago. It was reasonably efficient (though no racer), had very good capacity, and behaved reasonably well in some very strong quartering winds on Long Lake.

Add me to the list recommending the Spirit II. Its a wide, stable, family friendly boat and designed to be so.

@string said:
Take $100 less than the asking price in cash. It’s always worked on me.

I’m not too surprised about the patch - That canoe does look like it has been used and then some. If price isn’t a concern then the Spirit II is what you may want. With a big patch though I’d knock the Passage down to 350 - 400 or so. That doesn’t mean that it wouldn’t hold up for a long time though. One of the two Passages on our Lower Missinaibi trip this summer was well patched and has been for 10 years or more.

Thanks you all for the help. I ended up getting the Wenonah Spirit for $650.00 including two bending branches paddles that are in good shape. 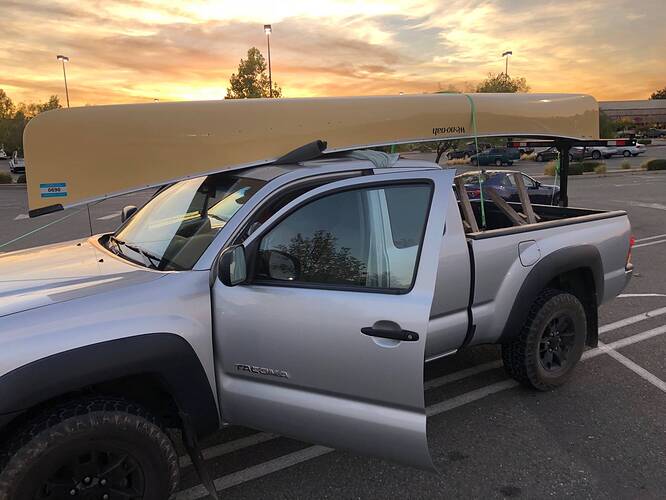 Wow that’s a heck of a buy. Enjoy

Excellent deal and canoe. I have always said if you want to improve the look of your car/truck then put a boat on top! B)

now you have to work on your tie downs… That rig is going to allow too much twisting at highway speeds and not much to keep it from shifting fore and aft.

I suggest starting at the front end. Rigging hood loops so that bow painter pulls down… Not at an angle( the angle allows too much twisting). However dual hood lines do help… (and these https://www.amazon.com/Shoreline-Marine-Propel-Trunk-tie-Down/dp/B01CRBXQUK/ref=asc_df_B01CRBXQUK/?tag=hyprod-20&linkCode=df0&hvadid=198096074308&hvpos=1o1&hvnetw=g&hvrand=6893431589805674372&hvpone=&hvptwo=&hvqmt=&hvdev=c&hvdvcmdl=&hvlocint=&hvlocphy=9002554&hvtargid=aud-467077737785:pla-352338593937&psc=1). If that long link does not work they are called hood loop straps.
At least one cab rack with stops to prevent lateral movement. Blankets and pool noodles do not work at all… The very least you lose them… You can also make a set of racks out of lumber to fit in the bed with eye bolts for attachment on the lumber