Hi all,
I’m new here, and considering purchasing this older Mad River boat. I’m trying to figure out what model it is, since the specs don’t match anything I’m familar with. I haven’t seen it in person yet, but the serial number is MADSX570C888-K.

Thanks for any help!

Needing to reduce our fleet. 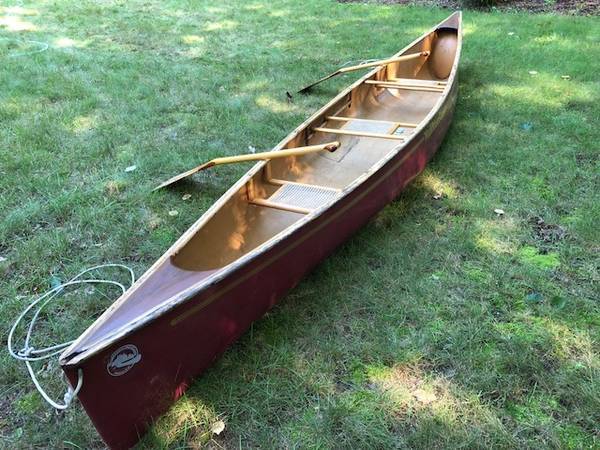 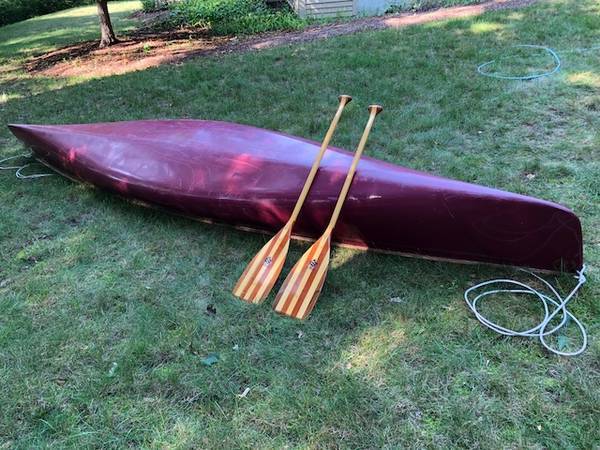 I am pretty sure it is a Mad River Traveler. It could conceivably be a Fingerling but I believe that boat was made by MRC for only one year (1984). The Traveler was a somewhat cut down version of the Screamer, which was a solo downriver racing hull designed by Jim Henry in 1973. I believe that the Fingerling was from the Screamer mold as well and cut down a bit further. The Screamer was sold by MRC from 1975-1985, and then the redesigned Traveler was sold from 1986-1990. That boat was made in March of 1988. The “K” appended to the end of the 12 character HIN confirms that it is Kevlar. But 58 lbs would be very high for a stock Kevlar Traveler which should weigh closer to 47-49 lbs. In this case, a thwart that would have been positioned in front of the solo sliding seat has been removed, and two wood-frame cane seats have been added, which would add a few pounds, but probably less than 10.

If you are considering buying this boat, two considerations should be foremost in your mind. First carefully examine all wood on the seats, thwarts, deck plates and gunwales. It is clear that the very front of the front deck plate has rotted out, and the gunwales certainly look to be in need of attention. If the gunwales are sound, perhaps all that is needed is a good sanding and oiling, but I would carefully check for dry rot of the gunwales, undersides of the deck plates, and undersides of the thwart and seat hangers where they meet the gunwales. If the boat needs to be rerailed, or needs attention to the trim above and beyond repairing the front deck plate and refinishing the gunwales, I think the asking price is too high.

The second consideration is how do you plan to use this canoe? As a solo canoe, it is very large. If you are a big paddler planning to use it for tripping with a substantial load, that may be good. If you are average-sized and plan to paddle it solo on day trips, it is probably too much canoe. It can be paddled tandem by a reasonably light tandem team, but it requires at least a moderate degree of skill to use it that way, because it is significantly narrower at the water line (about 29") than most tandem canoes. It could conceivably be used to paddle from the center seat with two smallish children sitting on the bow and stern seats, providing they don’t move around too much.

I have owned a Traveler since 1990. Although I have not paddled it for years, I did use it extensively on lakes and easy rivers and usually had one of my daughters sitting in a low folding chair just in front of me as I paddled it with the center slider all the way back. The boat is reasonably fast but straight-keeled so it is reluctant to turn unless you know what you are doing.

Here are a couple of threads discussing the Screamer/Traveler that you can peruse and decide whether or not this boat would suit your needs:

Thanks for all the info! I’ve now read a little about the traveler, and it does seem like what this is. I’d mostly be using it as a tandem with my partner, we’re both light (about 120lbs). And we’d be mostly be doing day trips on lakes in VT and the Adirondacks. I’d probably also want to do the occasional solo day out.

If you buy it, I would suggest that you outfit it so that kneeling is comfortable. That will probably require gluing in some kneeling pads and canting the seats slightly. Also, make sure that the seats are mounted high enough to provide adequate heel clearance to allow an easy exit should that become necessary.

I think you would find that boat considerably more comfortable to tandem paddle kneeling, at least initially. That boat is not much wider at the waterline than a Jensen V-1 Pro boat racing canoe.

And give yourself time on the water in friendly water at first. Do not get discouraged, “easy exit should that become necessary” might be " when it is necessary" at first.

Well, we bought it! Paid 650, since it needs a bunch of work on both ends (wood is rotted), and the gunnels need refinishing. There are also lots of scratches and some cracks in the paint, but that all appears to be just aesthetic damage. We took it for a test paddle around a lake, and it was beautiful. Seemed plenty stable and easy to paddle to both of us, and wow did it fly!

With a combined weight of under 250 lbs, the boat should be well suited for you and your paddling partner if the stability is adequate. And yes, it will be faster than most all tandems out there short of full-out marathon racing canoes. In fact, it has a waterline beam less than even the old Jensen USCA Marathon racing tandems.

It isn’t paint, it is gel coat. And unfortunately, that burgundy color tended to show light colored bottom scratches worse than just about any other. But you are right, the scratches and gel coat cracks are basically just cosmetic.

You might consider adding a thwart just behind the bow seat. The original canoe had a thwart in front of and one behind the sliding center seat. Position the thwart far enough behind the bow seat so that the bow paddler’s back is not pressed against it. The sliding seat frame and center seat will provide virtually no lateral bracing of the gunwales. The bow and stern seats will provide a little more lateral bracing, but since the seat frames are cantilevered on longish hangers, it won’t be nearly as much as a thwart. I am afraid the bow end of the boat might be a little floppy in its current configuration.

I bought a Traveler, a few years back for $225. Didn’t have a clue as to what it was either. It turned out to be, and remains my favorite solo canoe, despite its weight at about 65 pounds. I see that yours has three seats. I’ll bet that two have been added by the previous owner. You may not find that that was a good idea if you are planning to paddle primarily as a tandem. Too narrow, and doubtful if it was designed to go both ways. I haven’t tried it tandem, though.

I’m sort of new here also; have watched a lot, never having posted before. As such, I too have a question. I’d really like to get my hands on another MR Traveler, preferably kevlar, but any composition or condition would be good enough for me. I guess that I means I am putting it out there as sort of a want ad. Is that OK here? Is there a place to post my buying interests on this forum?

Good luck with your Traveler, I do think its a goodie, but get in touch if it doesn’t work out for you.