Brian Schulz of Cape Falcon Kayak just posted notice of this soon-to-be-published graphic novel by his friend Jonathan Case, a former Disney animator, and fan of skin on frame kayaks and kayaking. Looks like he weaves the theme of building and using traditional kayaks into a story of a future world where humans are struggling to rebuild after an environmental disaster. Looks like a very cool book and I just pre-ordered a copy., due to ship in April.

The book was only $15 softcover or $23 for hardcover and the site, bookstore.org, from which it can be ordered allows you to select your choice of local indie bookstore with whom to share proceeds of your purchase. 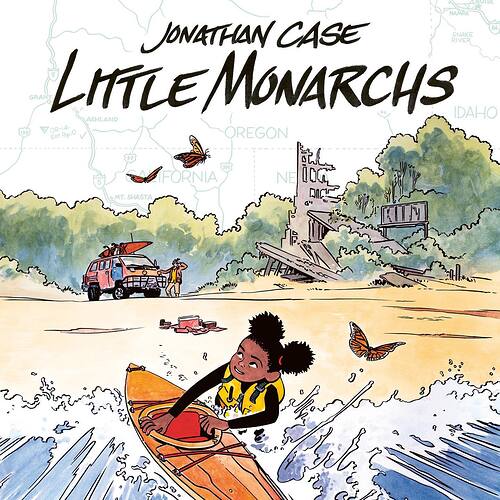 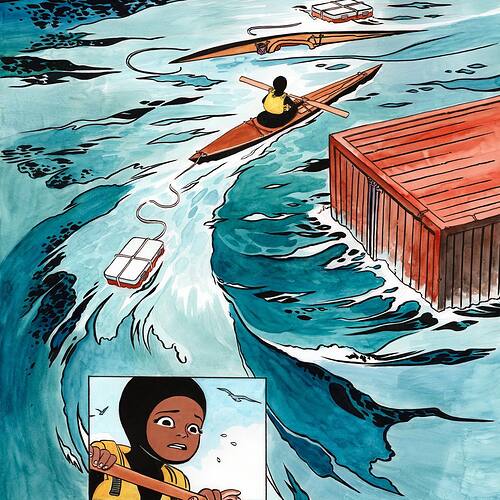 Looks like he weaves the theme of building and using traditional kayaks into a story of a future world where humans are struggling to rebuild after an environmental disaster.

Sad part is that “future” environmental challenges are here and now. The glaciers of Greenland and Iceland are quickly melting into the liquid form. Plenty of open water for the traditional/indigenous SOF.

I personally appreciate the BIPOC representation. As sea level rises, the poorest communities, including those in the USA, have least ability and resiliency to deal.

One reason to be hopeful about the future is that younger people, notably including those in poorer communities, are becoming more aware and concerned about how the neglect of the environment affects them and their communities. They are speaking up and they are getting more involved.

After I enjoy the book myself, I plan to send it to my favorite “niece” (actually my cousin’s daughter) who began a job last year in the PNW, applying her Masters in environmental science to teaching indigenous kids in a progressive tribal education program. Might get another copy to give to my local library.

My experience from helping with my son’s scout troop is that kids are changing. I saw the decline from 1990 to 2001, when I finally walked away. My son stayed as an adult for almost 10 years. It finally degenerated to the kids just wanting to play football or sit around. The new leader didn’t ban hand held video game. No more outdoor adventures, no learning skills, nature challenges were too hard, too dangerous. Why didn’t my son get advancement? Parents only wanted to check off boxes for their kids.

When I left, the charter had been continuous for over 100 year (short period of inactivity during the second WW). Now its done. Kids have no interest. Hope it’s not country-wide.

After I enjoy the book myself, I plan to send it to my favorite “niece” (actually my cousin’s daughter) who began a job last year in the PNW, applying her Masters in environmental science to teaching indigenous kids in a progressive tribal education program.

That’s good to hear. In contrast, the daughter of my friend and former colleague, graduated several years ago from UVT with an environmental science degree. The daughter was very pessimistic. In her opinion, it’s TOO LATE to deter the worsening effects of accumulated neglect that came from ongoing denial of climate change. She took a turn into youth education, rather than to work in environmental science because it was too depressing and overwhelming for her.

Personally, I am sadden by my friend’s daughter. I think of my baby granddaughers’ future. I want to think the youth currently engaged in climate action activism across the globe can still save themselves and the future.

I suspect that the dwindling of scout troops and other such youth organizations (from which I benefited greatly as a kid growing up in the 50’s and 60’s) is due to many factors. One is that American adults work longer and more irregular hours than they did back then and in most households both parents have jobs and thus less free time for that sort of commitment.

Also the rise in parental meddling versus actual assisting in youth activities, burdening those few organizers and leaders with impossible “requirements” to be carved out for their “special children”. I know folks who have dropped out of trying to mentor and arrange youth programs because of the aggravation of helicopter parents and the stress of assuring that none of the participants gets a snack that they might be allergic to, or is “triggered” by some challenging outing or whines and disrupts the activity because they are unaccustomed to being told what they need to do to cooperate with the group.

Then there is the growing need for “waivers” to be signed to try to avoid lawsuits if a kid even gets a minor injury (the sort of playground gash or scrape that our mid century generation just got iodine and a band-aid slapped on and then displayed as a badge of honor to our peers.)

It’s also harder to get groups of young kids together for after school activities because of the way school populations are not within walking distance of nearby neighborhoods, even in urban areas these days.

All that said, I have been heartened to see more participation in outdoor exploration and environmentally related projects from young people in my own city. We are seeing a rise in “minority group” involvement, especially among younger people, in sports from rock climbing to kayaking to ice skating to surfing which is invigorating the outdoor industry AND creating more awareness and appreciation of the natural world in some of those communities where it was not as strongly recognized before.

I can understand why a young person trained in the Sciences might be tempted to despair – perhaps because I have been “despairing” about the degradation of the environment for more than half a century, I’m able to embrace hope more readily, even if it might seem like a self-delusional reaction. But as the saying goes, better to light one small candle than curse the darkness.

All the above is true. Parents come in assorted styles. We had a very dedicated group, and between 12 and 28 kids. A few adults went over and above. Others willingly committed if needed.

A charismatic young scouts with leadership skill was a tremendous asset, especially if he had friends ready to support him. A few adults went over and above. Others were committed if you needed them. That worked well.
We also had parents who were fully committed, but the scout was not. The parent wanted eagle, the kid did not, and he failed to perform ever leadership respondibility. We put him before the review board hoping he could recognize his shortcomings. Instead, he blamed the kids who filled in when he didn’t show up. I was on the trips to witness his failings, and explained to the panel that he not only failed to recognize his shortcomings, but lie about events, then blame the actual leaders. The panel dismissed the issues, so I pointed out that this scout by advancing would set a standard to follow.

Finally, I agreed to vote with the majority opinion, if the panel felt justified in passing him. Nobody would cast the first vote. The parent appealed and asked for letters from everyone except me and another member who agreed with me. That made advancements a matter of how much the parent participated. One of many issues. I stayed and continued to cook for the adults, but told them I had no respect for their process.

The parents mostly lost sight of the purpose - to teach kids responsibility, build moral character, civic pride, teamwork, and leadership skills. Interacting in a natural setting was the perfect place to leave distractions behind and face challenges with what was at hand.

I don’t regret a minute of it. I learned a lot, more than the kids. I grew tired of letting kids take the easy way out.

Too many parents any more seem to view that the only reason for having their kids participate in sports or gain awards or badges in organizations is not to gain a skill, enjoy themselves or build confidence and camaraderie, but to pad the eventually CV and application package when they try to get into “preferred” colleges. All about building a “resume package” rather than a mature and competent human.

The book I mentioned 10 weeks ago (and pre-ordered) finally shipped to me today and it’s quite a nice volume. 255 hard cover pages of a well-rendered graphic post-environmental-apocalypse sci fi fantasy tale that begins along the Oregon coast amongst a small group of survivors, one of them a feisty 10 year old black girl named Elvie who paddles a traditional skin on frame kayak as one of her “chores” in scavenging batteries from stranded container ships along the coast.

The format reminds me of my favorite book from childhood, Holling Clancy Holling’s “Paddle to the Sea” in the quality and detail of the illustrations and the way that it weaves geographical and natural and human history into the narrative. Educational along with being entertaining. (one bit, shown below, instructs how to properly rig and sleep in a hammock, and there is much detail on the live cycles of the monarch butterflies, which are critical to the plot.)

I’ve only read a couple of chapters but plan to finish it this weekend. I’ll attach a couple of shots of the pages. I would assess this as being appropriate for any kid who’s an avid reader and outdoor adventure and Nature lover 5th grade and up. As an adult fan of comics and graphic novels, plus an SOF enthusiast, I’m enjoying it myself – the kayaking bits are satisfyingly accurate.

At $22.99 I think it’s a reasonably priced slipcovered first edition. Ordering link is in my initial post. 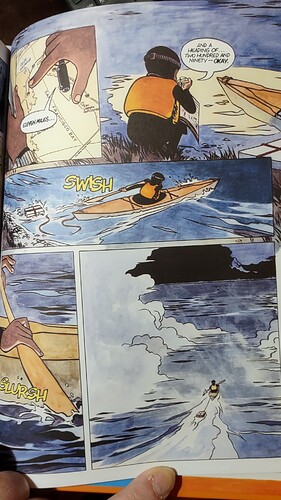 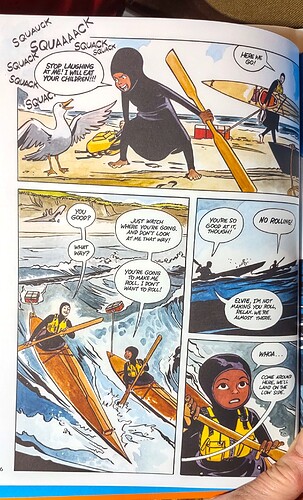 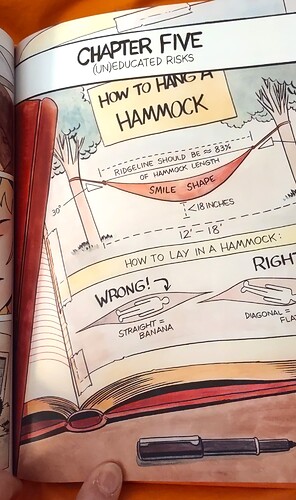 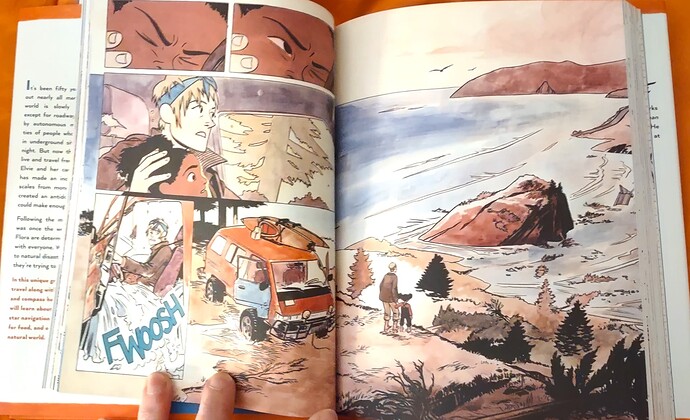