Hi All - I am new to the forum and a relative newbie to the sport. I recently borrowed a friends Itiwit Decathlon 3 person inflatable to do a 20k overnight trip to some coastal islands here in Hong Kong. The boat was stable and carried me and all my gear comfortably but it was slow and a bit frustrating to paddle. I really enjoyed it and I’m keen to get my own boat, but I’d really appreciate some advice on types and sizes of kayak as I can’t really demo any here.

Conditions were pretty gentle, the wind was 12-13 kt with some swell and the tides here are fairly small compared to say the UK. All of my paddling here in Hong Kong will be coastal.

I’ve looked at a couple of options, including the better Itiwit x100 with the drop-stitch floor, and the aqua glide chelan 140 which looks like a fairly significant upgrade. I am also very interested in the fully drop-stitch designs such as the sea eagle razorlight and aqua marina tomahawk. How do these new designs fare in coastal water? All experiences and advice very much appreciated!

Inflatables are not sea kayaks.

Please excuse my ignorance - would it be more correct to say inflatable kayak/canoe that can be used on the sea? I guess that is what I am asking.

First, I’d suggest starting with a couple of articles to get some basics. There was an article about Kayaks and Small Living places in California Kayaker Magazine. it can be read online at http://www.calkayakermag.com/magazine.html under Issue #9 - Summer 2012. It talks about summary of pros and cons of inflatables, and some other options available. In short, inflatable kayaks track less well, are slower, and are much more impacted by wind than similar hard shell kayaks. If you are able to store and transport a hard shell kayak (big question in such a crowded city as HK)

Issue #10 has an article on the basic types of kayaks in issue #10 that might be worth reading.

On inflatables, there is a guy who made a video with interesting breakdown on types of kayaks that also seems worth watching. https://youtu.be/5U8u_rkNTSY

In Britain, there are often kayak clubs which people are members of where they can take out kayaks, making so that not everyone has to won their own kayaks. I wonder if HK brought this tradition over. I did see a bunch of boats down in Stanley and was wondering if this was a club.

Not surprising that you found the going pretty slow in the Itiwit. Conventional inflatables don’t have much longitudinal rigidity so paddling solo in a boat designed for 2 or 3 paddlers would mean that your weight was bowing the hull down and creating a lot of drag. You are correct that a drop stitch hull inflatable would increase performance. Grabner makes some good touring type inflatable kayaks and canoes but I don’t know if that brand would be available in Asia.

Another option you might want to consider is a folding kayak. I know of two people who have lived in coastal Asia who used them. One is currently in Indonesia and the other lived in Okinawa. The fellow in Indonesia uses a Pakboat Quest folding kayak. These models have a metal frame that assembles like a camping tent frame, with a fabric and rubberized skin. They have more rigidity than inflatables, are often lighter and have far more storage capacity for camping gear because they don’t lose volume like the bulky inflatable walls do. I’ve owned 8 of them over the years and currently have a smaller version of the Quest. It performs as well as most hardshell kayaks of the similar size.

Here’s a link to the Pakboat Quest – it can be used as an open or closed kayak, with or without the removable deck. It’s distributed by ScanSport of Norway and they may have an Asian dealer. The decked boat weighs under 15 kilos and without the deck it is under 12, so it could be shipped.

And here is a video of a guy paddling a Quest 150 in Hong Kong’s Chek Mun channel. 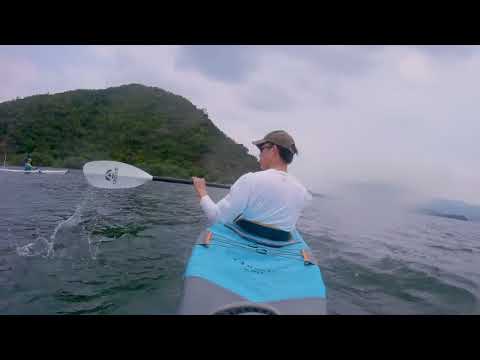 Inflatables do not do well in the wind. Best for down river boats.