Hello Everyone! I’m looking at getting into whitewater canoeing. I have looked at the different Canoes. I had used a OC1 while attending a summer camp I went to and had a great experience with it. (I didn’t go down a river with a bunch of rapids though because I wasn’t allowed to.)

I would say that the Detonator would be the best first canoe for me. But my questions are:

I’m not worried about the rivers I will be going on right now. I don’t even own a canoe yet. I’m gonna start of on flat water before attempting a river. I’m wanna know the best gear to use for when I go down a river like a pfd.

I’m curious as to why you think the Detonator is the best canoe for you. It’s not particularly geared towards beginning WW paddlers. Hard chined boats aren’t usually a whole lot of fun to learn in. The Raven is a much better boat to learn in. This is from an older Paddling Magazine review of the Detonator:

"Esquif is marketing the Detonator as an advanced paddler’s or expert’s boat for Class III rivers and up. "

“The largest market and the best fit for the new Esquif Detonator may be aggressive intermediates and smaller paddlers.”

Under specs for The Detonator, It says that its skill level is beginner to intermediate on paddler.com. If you say its for experienced paddlers then somethings not right. 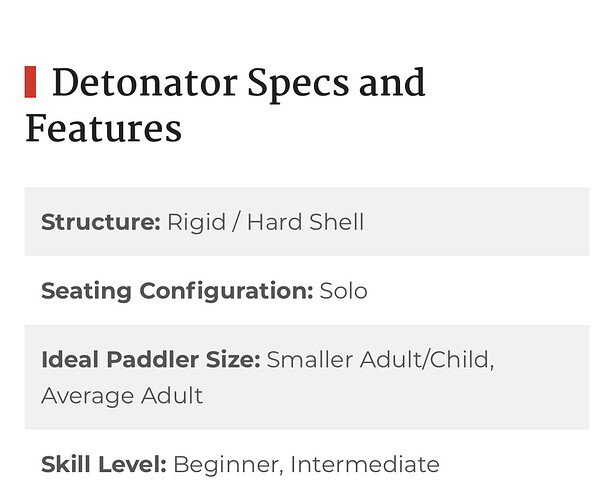 This from one of the reviews jumps out at me “Not for a beginner - it’s so loose a novice will be swimming a lot. Every experienced paddler that I’ve let paddle it, loves it.”

So, this may be a canoe that will provide you an education (at the cost of a few swims - some of which may be epic).

If you are buying new, the retailer should help with the outfitting as you will need a pedestal & thigh straps or something similar. Air bags and the mounting kit should also come from the retailer. For a PFD, to start one that fits and is comfortable. Helmet - I’m partial to WRSI. Paddle length will depend on where your shoulders are above the water when you are in the paddling position. Honestly, if you are As new as you suggest, you won’t notice 2 - 3" difference for a while.

While I think that there are better boats to help you learn in, there is nothing wrong with a Detonator. As Rival said, some of your education may be a little wet. I was just curious as to what steered you towards the Detonator.

Proper outfitting can be as important as the boat itself. You need to be connected to the boat, but be able to “disconnect” quickly if needed. You’ll want an adjustable system, because as you progress, you’ll most likely want to crank it down pretty tight. At one point my outfitting in my Ocoee was so confining it was probably dangerous, but that boat and I could operate as one. Those days are pretty much behind me (Class V, hand-rolling an OC1, etc) but man I had a lot of fun before knees and shoulders started to fail me.

Whatever you get, enjoy it!

I’d check to see if there are groups in your area that do whitewater, explain your situation and see if someone would offer you up theirs to try. Mebbe say you’ll give someone some cash if you can try their boat WITH THEM there as you’re just learning and don’t know what type of boat you should buy. I’ve found people who are proficient in something are pretty willing to help a newbie if they are approached with respect and respect the skill of the craft/trade.

Or see if there are outfitters in the area that take people on trips/rent rafts.

I respect the idea of buying something that one will grow into, skill and experience wise, but the more ‘niche’ it is, the harder it’ll be to sell if one loses interest in it.

Canoe: I have jumped in a friend’s Detonator once or twice when we traded boats on a stretch of river. The Detonator really has a double chine so it really functions like a much softer chine than that of say an Ocoee, a Viper, or a venerable Edge. I think it would be an OK boat to begin with based on my limited experience. The one thing I have noticed about Detonators that had been in use for some time is that most seemed to get quite a bit of abrasion wear on the outside of those chines.

As for float bags, anything that can be secured within the hull, holds air, and displaces water will work. Of course, lighter is always a benefit so urethane-coated nylon is more desirable than vinyl. Starting out I would probably look to pick up a set of used vinyl bags from someone who upgraded to nicer bags in order to save a few bucks. Just make sure they don’t leak too badly. Hard core open boaters will often get the biggest bags they can get in the boat so that the front bag is partly enveloping their knees and the rear bag is hanging over their feet a bit so as to displace as much water as possible but you really don’t need to have the biggest possible bags. In the old days of 14-15’ solo whitewater canoes I used to like to leave a space between the front of my knee pads and the front bag so I could stick my head up into the hull if I capsized. That would sometimes allow me to breath from the air pocket and “hang out” upside down until I washed through a rapid or out of a hole before attempting to roll up. But most whitewater canoes have become too short to allow that and you can’t do it anyway with a bulkhead-style pedestal. But I still like to have a little free space in front and back of me to stow my water bottle, throw bag, and a small dry bag.

Paddles: many choices but just make sure it has a T grip. Picking the right shaft length is probably more important than choosing the right model and brand. Nearly all of the whitewater open boaters I know that pursued the sport for more than a couple of decades all “graduated” to shorter and shorter paddles as their shoulders got worse and worse. I started out with paddles 58-59" in overall length and now usually use a paddle 56" in overall length. Werner, Aqua-Bound, Mitchell, and others make high quality paddles. But you really don’t need high quality starting out. Just something with a synthetic blade and T grip. If you are pressed for cash starting out a relatively inexpensive paddle of the type made by Caviness or Carlisle and used by whitewater rafting companies will suit fine. You can probably find someone to give you one as whitewater open boaters are always finding these floating around on popular rafting rivers. That would allow you to fine tune the length that is best for you and you could always use the cheapo paddle as a spare down the road.

As for determining the right size for helmets and PFDs the answer is easy but putting it into practice is a bit harder. You try them on. Sizing of helmets and PFDs is very subjective. My favorite whitewater PFDs are made by Astral these days but Kokatat, Stohlquist, and MTI also make good ones and there are other good brands as well. Good helmets are made by Sweet Protection, Shred Ready, WRSI and others. And you might find a perfectly good used helmet that fits to start out with. Just make sure it is specifically made for whitewater, not a bike helmet or hockey helmet.

And as the old saying goes, it is not the arrow, it’s the Indian. You do definitely want to have a good and functional helmet and PFD, but not having the absolute best in stuff like paddles, and float bags is not going to hold you back initially when starting out in whitewater. Your ability will be the limiting factor for quite some time. At least for most.