Newbie questions and is this a dancer?

hi all, I’m a bit of newbie to kayaking (been quite a few times with groups but not solo)
I’m planning on mainly paddling canals on short day trips what would you say are the essentials to carry (UK)
additionally I bagged this kayak for free I believe it’s an old perception dancer can anyone confirm? 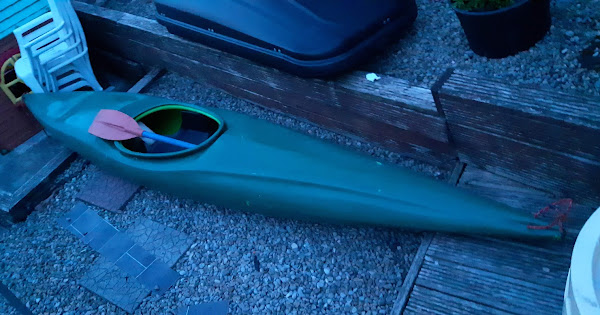 Have you tried posting on the “Song of the Paddle” forums? Many more participants in the UK on there than here (mostly Yanks on this forum.) You may find a local paddling club nearby who would be a good source for information on both the boat and some upgrades you are going to need to make to start using it.

Can’t tell if it is a Dancer as there were a lot of whitewater boats that look like that back in the 80’s and 90’s which is probably the vintage of that freebie. Perception made many similar models. Can you find a serial number on it somewhere? Often engraved in an inconspicuous place on the outer hull.

You need inflatable flotation bags to go in the stern and bow for safety. It will fill with water and sink otherwise if you capsize. Also, that paddle is junk. Invest as much as you can afford in a decent paddle. Expect to pay 100 to 200 pounds for a good new one, maybe half that if you can find used. But if you can borrow some first you will be better able to determine a good fit and style that suits you. Investing in some beginner lessons will go far – paddling is not as “intuitive” as most people think. And having some safety guidance is a very good idea.

And of course you need a PFD (though I think you folks call it a “buoyancy vest”). Yak makes nice ones, readily available on your side of the Pond. Also a spray deck or you will be constantly wet. A bilge pump is handy (should be under 15 quid) and you will want a dry bag or two to stash your kit under the deck.

Since these old WW boats don’t have deck lines you don’t have the options for carrying gear topside. You might want to consider adding some deck rigging. You can order pad-eyes (loops that can be mounted by drilling holes in the deck) and use perlon line and bungee cord to make both stretch and static lines. The static lines are to help you climb back into the boat if you are pitched out of it.

Connecting with a local club will give you access to people selling used gear (best route when you are starting up) and some have a club livery from which you can borrow gear on group outings which is a nice way to determine sizes and styles of things like PFD’s and paddles that could best suit you.

Song of the Paddle Forum

The web site and forum for all canoe users who hear the Song of the Paddle.

You need split bags for flotation. Dancer has a pillar.

Dancer was made by Perception.

One reason it was free is that these designs were death traps. When running drops in WW that point would get pinned, entrap the paddler with tragic results. The point would wedge under rocks and the current would eventually push the paddler forward , face down on the front deck. I know one thinks they could get out of that but you can’t.

I don’t the OP needs to worry about being vertically pinned while paddling a canal. I’d be more inclined to think it was free because it is at least 25 years old. If it is a Dancer, they were last produced in 1995 (although the XS was made until '98). Basically every kayak was a “death trap” then before keyhole cockpits became standard, yet somehow we survived.

Perception made some other rotomolded polyethylene whitewater kayaks that looked quite similar to the Dancer although far more Dancers were made compared to those models. If you can get an accurate measure of overall length and post it we can confirm that it is a Dancer.

Unless someone has removed the central, vertical foam pillars in front of and behind the cockpit opening, the boat will have positive buoyancy and will not sink. Although supplemental flotation is never a bad idea, if the pillars are there, you may be able to dispense with bags for the type of paddling you describe.

Boats of that vintage did have much smaller cockpit openings than whitewater kayaks that came after. They are a little slower to get out of. But the Dancer was one of the most popular whitewater kayaks ever made, if not the most popular. Many people made many first descents in them back in the day. But it would be worth your while to find some protected water or a swimming pool and practice some wet exits so that you know the technique required to escape from it should you capsize. If you capsize you need to tuck forward to the front deck, release the spray skirt/deck, and then slide the whole boat forward off of your hips and legs somewhat like taking off a pair of pants.

Later kayak designs with keyhole cockpits allow you to raise one knee, if not both knees up out of the boat while remaining seated after which you can raise your butt straight up out of the boat. You probably won’t be able to do that in that kayak.

If you want to use a spray skirt/deck make sure you can find one that fits that relatively small cockpit opening. As cockpits got bigger and bigger, most manufacturers stopped making skirts for those old boats.

Have you been in the kayak? As a former dancer owner, I found them VERY uncomfortable for me (just an average guy) to get in or out of, with the ‘out’ being very important!
Depending on how it was kept, those old dancers could be reaching the end of the useful life of the plastic.

I don’t believe it is a dancer (I still have a perception mirage) but something similar. Echo others who complain about seat comfort, lack of a backband, and small cockpit opening. As far as the plastic wearing out, from my perspective it is all good until you start punching holes through the hull. These boats have negative rocker so surfing is on very low angle waves before the bow buries and the lack of edges means it’s hard to get the boat zipping side to side on a wave, but side surfing was pretty stable in holes (hull rounded not edged). That boat should hold a line well, roll easy, and carry some speed. In big features or drops, the long nose will pencil in so learn to keep your weight back. Other than the comfort factor it will be fine for recreational paddling environments. Does it have gray minicell foam pillars, lower coarser grade white sheet foam, tubular plastic, or no pillars? The pillars are important because they add structural support. The cockpit shape looks very c1 to me. Is it set up to kneel in (thigh straps)? It looks a whole lot like my old perception gyramax c1 which is a closed canoe (kneeling, single paddle blade) rather than kayak (sitting, two blades). It is the cockpit shape that leads me to think this. Does it have any seat at all? It is kind of hard to conclude from the photo. My mirage and believe dancers were a bit less circular in the cockpit directly infront of the paddler but again this could be an optical perspective issue from the photo. Perhaps a perception quest kayak, even older than my mirage. ender that baby! ahhh my glory days 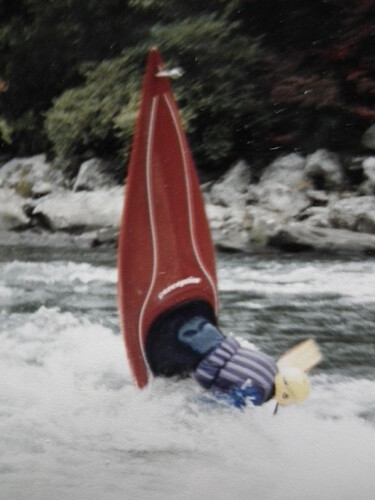 Some of the prior replies talked about float bags and the like. If you are on narrowboat canals or other similar narrow/shallow bodies of water, you could get away without these. Not enough water from what I have seen for the boat to fully sink in should you flip over, and you are plenty close to shore to swim yourself and boat out in an emergency. Doesn’t hurt to have float bags (good safety measure), just saying they may not be needed in your situation.

Hi all, thanks so far for everyone’s input.
I thought I’d add in a few things about me too.
as said ive been kayaking a few times as a former army cadet and outdoor adventure groups it not really in the last 10 years or so and not on my own. that said I’m not a stranger to the canals as my inlaws own a narrow boat and we spend the majority of the spring and summer out on the canal.
I already have a PFD we use in the canal and various bits too (ie dry bags).

I’ve never used any additional float in a kayak before but as pointed out is better safe than sorry even if it’s only on the canal. I was looking into adding the spray deck and some rigging too (and deck lines)

there isn’t any markings or serial number I can find.
the measurements are;
total length 380cm
total width 60cm

indeed it is also split with foam pillars.

the previous owner has had it since the early 80s, he was letting it go as it was mainly used by his teenagers which have now grown up and moved on to inflatables anyway. (again this guy had a whole garage full including 40ft dual engine speed boat.

None of those boats really match up. I’ll see If I can find an older catalog, but 93-94 is as old as Perception has online.

It does look from its general lines to be a Perception boat dating back to the early 1990s or late 1980s, although there were some other boats of a similar appearance. Definitely agree it is too long to be even a Dancer XT.

The Perception kayak of that vintage that would fit the measurements most closely would be the Spirit which had a listed overall length of 390 cm and a beam of 60 cm.

The Spirit was a large volume kayak and if that is what it is it probably wouldn’t be a bad boat for your intended use as it’s long waterline length would provide some efficiency and it should track well.

after a scout about online again I believe it could be an Ace Europa.

Don’t know if this is a help, but yesterday I took some shots. Here are some photos of a Dancer for comparison. 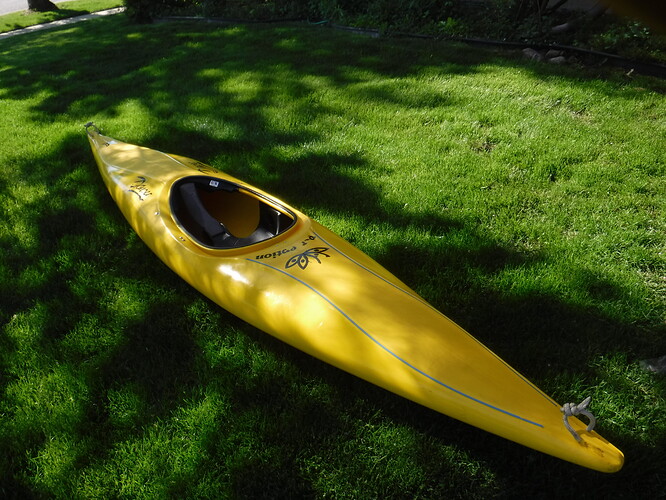 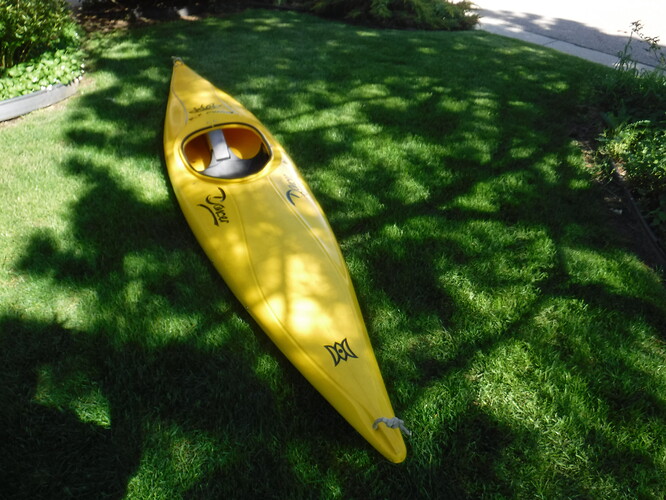 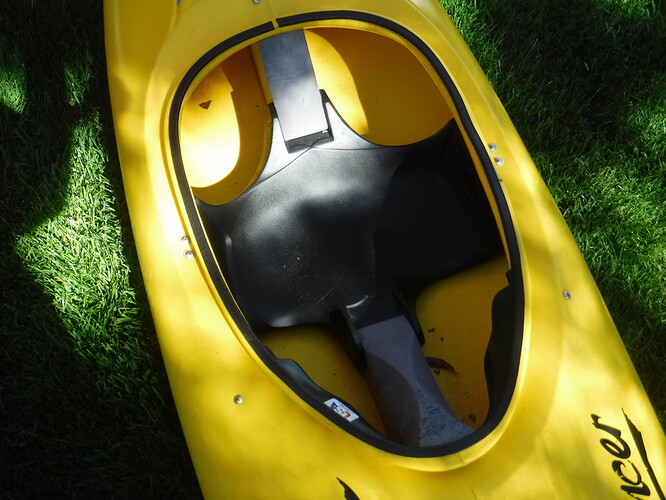 you definately want float bags ( or pool toys) in at least the stern your boat. Built without drain plugs these old perception long ww boats are not that easy to drain.