I’ve been doing a bunch of research and youtubing but I just need some actual advice from people who know what they are doing.

I am looking for a kayak with enough storage for a 3 day trip, around 12-14 feet in length. Mostly looking for flatwater but would like the option of open water as well.

The kayak outfitter near me are selling a couple of sea kayaks made by Liker (Chinese company). I’ve taken one of their classes with these, and they don’t have much secondary stability. Granted, the class was hosted during gale force winds.

The difficulty is choosing one, since I’ve been reading and seeing a lot of more experienced paddlers really loving the Eddyline’s, Wilderness Systems’, etc.

Those kayaks are definitely beautiful and well made, but also much more than my budget right now. I feel like it’s a no-brainer to jump on the Eddyline’s, but was wondering if I would be missing out on the skeg and rudder combo.

I’m pretty set on purchasing a touring kayak, but I know Eddyline makes “hybrid” recreation/touring kayaks. So I’ve been kind of losing sleep over this choice.

Hopefully one of you kayak Yoda masters could give me a couple of pointers.

Thanks in advance, gurus!

I highly doubt that the one class, in good or bad conditions, gave you time to feel comfortable with secondary stability in any kayak unless you have extensive kayak experience. Secondary stability comfort & feel is gained over multiple days on the water in a kayak once you are experienced with extensive butt-in-boat time. I’m talking a season or seasons of paddling regularly, not after one or two classes or video viewings.

Since you are thinking open water, you should be looking at kayaks in the 16-17 foot range with at least two dry compartments/bulkheads.

A skeg or rudder comes in handy depending on the situation. There are plenty of other thread discussions about the benefits/negatives of a skeg or rudder. I cannot imagine ever needing both a skeg & rudder.

It sounds like this is your first kayak? Recommend waiting to buy a used kayak with at least two dry compartments and a skeg or rudder as you personally prefer. Also recommend getting more butt-in-boat time before any epic multi-day paddles.

Out of curiosity, roughly where are you located? There are a number of decent used kayaks on the classifieds here that are within your budget.

I looked at the web site for the Liker kayaks & they look like rotomolded copies of generic sea kayaks. Probably OK for the price but I wouldn’t expect any service or support. I also don’t understand BOTH skeg & rudder. The one that I looked at is 14’ 9" X 22" and could be a bit lively for a new paddler.

@kayakhank thank you for the Yoda advice of butt-in-seat. I will definitely do more rentals.

@rival51
I am located in San Mateo/South San Francisco area. I’ve also been looking on Craigslist, BASK, etc. for some good used ones, but since I’m super new, I’m also unsure of the quality of the kayaks.

I have attached a picture of the specific one they are currently selling. I gathered as much with regards to the lack in service/support. I also was confused on the skeg and rudder combination, but thought that since it was such a rare occurrence, I should ask on this forum.

As for the gale force winds, we were not even aware of that when we arrived at the location. The instructor pointed out the two triangle red flags flying and stated “we are going out in gale force winds”. Albeit we were in protected harbor during the duration of the class.

So not entirely sure if “gale force winds” might be it, but that’s what we were told.

Definitely a nerve wracking experience, since we were doing buddy rescues and self rescues. Drifting away and heading to the rocks was a poop-in-pants moment for me.

I’m also eyeing a Wilderness Systems Tempest 170. I hear a lot of great things about them. Thoughts? 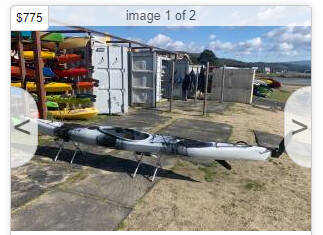 This is a good one, and a steal at $600. Even if you ended up not liking it you could buy it, use it, take lessons, etc., then sell it without being likely to lose much if any money, and buy another.

Edited to add: I just looked more closely at the ad and saw the damage in the last few pics. I am not too experienced with evaluating damage, so maybe someone else will come along and say if it looks OK or not.)

QCC 600X kayak 2007 model 16’ long Kevlar and carbon fiber hull (confirmed: the interior is black just like the manufacturer says to look for) In good not excellent condition. The hull had two...

I saw that one and was interested, but wasn’t too sure of the condition.

I guess the biggest detractor for me from shelling out the $600 for the one you advised is just the quality of it.

I really do appreciate your help in trying to find me a good one though.

If you were doing rescues & in the water you were in a pretty good class for a beginner. Without knowing the venue I can’t speak to whether or not the class should have been held in those conditions.

Wait until some other people come along and maybe take a look at the pictures of the damage, and tell you what they think. That is a very good quality boat, and seems to be appropriately sized for you.

ETA: Hey, I feel dumb, but now I actually READ the whole ad, and those are before and after pics, so the damage has been repaired. If it were me and I were interested in the boat, I would maybe even make a separate post linking to the ad and asking people, Is this damage well-repaired?

You were in some advanced conditions for sure even if a protected area. Rocks & rock gardens are fun to play in…maybe sometime in your future. I understand your poop-in-pants moment and it is good that you recognized a potential danger zone.

You mentioned a WS Tempest = that is a really good starter kayak. Hope you will take a serious look at one. A Tempest 165 may fit you better than a 170, but either is a good first kayak if you can get one. Check it to make sure the bottom doesn’t have any deep gashes, the skeg easily operates, all hatches fit (easily changed out if not so factor that into purchase price), and that the seat is firmly attached.

Suggest your first kayak be plastic as they are more forgiving when scrapes happen as you learn kayaking. Carbon fibre (CF) is lighter and fun to paddle, but with you having rocky coasts and rocky beaches, focus on learning how to kayak (and not protecting your kayak). Fibreglass is easier to work on than CF but I would look at either of those as an upgrade kayak rather than a beginner kayak. I would pass on the QCC that had obvious repairs & damage.

You are fortunate to live in the SF Bay area as you have lots and lots of great paddling in the bay, rivers, and along the Pacific Coast. Wish I had paddled when I lived in SF 3 decades back, but started 3 years after moving from SF. Now I have to travel to paddle your great waters and rock gardens.

All good, I feel dumb as well, since I took a second look at the posting and saw that there were before and after pictures as well.

Thank you for all the effort in helping me out and introducing me to the legendary John Winters. If nothing else, I will be having dreams about QCC kayaks for a while. They are beautiful.

That makes me feel so much better, knowing that a guru like yourself acknowledging my poop-in-pants moment is huge.

I think I’ll be holding off on rock gardens for a while like you mentioned.

The WS Tempest is actually a used one that is going for $900. I think I’ll be taking a good look at it, since you’ve suggested it to be a really good starter kayak. I’ll make sure to have a second pair of eyes look it over as well.

I’ll take your advice on passing up the QCC for someone with more skill and experience on working on kayaks.

I realize that living in the SF Bay Area I am blessed to have a bunch of really great waterways. I’m still learning all of the little areas where it would be suitable for me to go slow and not have poop-in-pants moments as often.

Thank you for all your advice, you’ve (all) been extremely helpful.

I just want to give the paddling community a huge shout-out for the super quick and helpful responses to my questions.

It makes for beginners like myself feel extremely welcome and safe to ask questions that may seem trivial to more experienced paddlers.

Far from a guru…just a bit more experienced paddler. You are wise to be taking lessons. Your learning curve should be exponentially faster than if you tried to learn it on your own or via videos only.

Hopefully in your classes you will meet some other folks or clubs with which you can paddle to gain experience.

From what I see I’d flash 550 cash and run with it. Market is tight and repairs on that hull are minimal cost. So if you do spend 300 to repair you’re at 850 for a good fast kayak you can use for years and still sell it for a decent price in three it four years. It will be worth 400-450 in four years easy. So 100 bucks a year for lots of fun. I’ll look on my iPad at pictures better. Now I’d say grab a paddle and go.

Look on the inside of hull for damage. Probably all just cosmetic. Worse case few strips of fiberglass tape on the inside. New comparable boat would be near 4 grand.

Thank you so much to everyone who responded. I ended up getting a used Wilderness Systems Tsunami 125 that popped up on Craigslist just as I was about to leave work.

Now to start getting “butt-in-seat” time!!

Good starter kayak. Wise move to jump on buying it. Do not be surprised if you out grow it by the end of this season if you get on the water regularly.

Curious as to why you chose a kayak over a canoe?

I guess I just never thought about a canoe. Also my perception of canoes were that they were big and clunky, and I don’t have much room to store something big and clunky.

Nothing against canoes, though. If I had the space for them I would definitely consider them.

Well, canoes can be big & clunky as can kayaks but it is not a requirement: https://www.hornbeckboats.com/lightweight-canoe-classic-10
The Hornbecks are just one option.