Nice time on the water today

I went out to LaDue Reservoir again. I put in at Valley Rd (Old Rte 422) for a change this time; I usually don’t. Akron must be awfully thirsty; the reservoir is down even further than last time I’d seen it, and that time I put in on Rte 44 and went west–and ran out of water soon.

There was a light breeze coming straight out of the east, and I paddled into it going across. Saw a pair of bald eagles as I approached the eastern shore. I got out there and walked around a little and headed back. On the way to the put-in I spotted something sticking up out of the water and couldn’t figure out what it was, so I took a detour to investigate. Amazing what shows up when the water gets low enough. 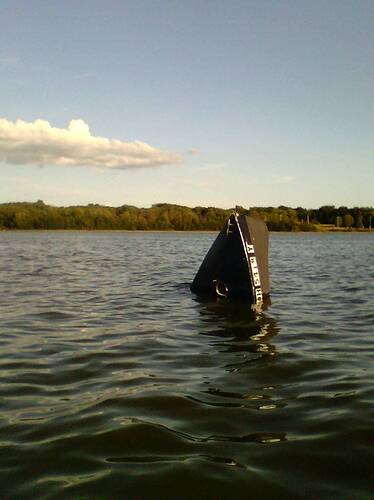 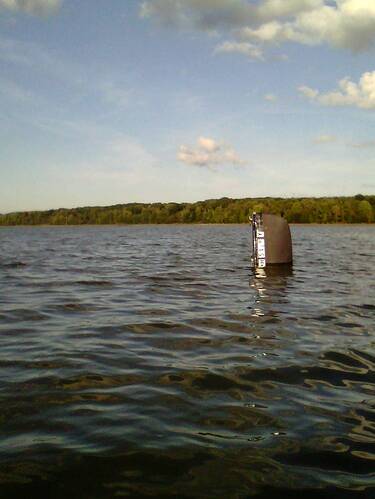 Wow. An interesting find. We’re still dealing with very high water levels up here in Michigan. Wish we could send some to your reservoir.

Not my reservoir, I just paddle there. I’ve never figured out how come Akron owns all this water–plus another reservoir even farther north–when the city is tens of miles south of this lake, not even in the same county. I’ll bet the plumbing is an interesting piece of work.

BTW, one of the fishing maps for LaDue shows the middle of it only 20 feet deep. It’s down probably five or six feet now, at least, so the other end of that sailboat has to be stuck in the mud at the bottom. And now I’m wondering if anyone ever tries to salvage anything out of there, and what else there might be.

That’s quite a water hazard!

Not so much right now, since it’s clearly visible. Gasoline engines are prohibited (except for use by the rangers), so … well, ironically, the fastest thing you’ll see on that lake will be–a sailboat. I wonder how that one met its end.

@greyheron said:
–a sailboat. I wonder how that one met its end.

Around here its usually a cockpit drain or leak in a hose to a sea cock. Boat fills up with water and it settles down to the mud bottom upright so only the mast is showing. Can’t find any pictures. That one likely was smaller and lifejackets, and/or a closed cutty trapped enough buoyancy to keep the bow up…for a while.

Or its something else. Note that there isn’t an anchor line. Happened underway?

Shoulda hooked up a line and paddled like crazy to pull her up!!
Salvage rights!!!