No ice to break at our annual icebreaker paddle

For 25 years, my local club ran the northeast’s first wildwater race of the season (Rhode Island Whitewater Championships) on the third Saturday of March on the Branch River in RI. 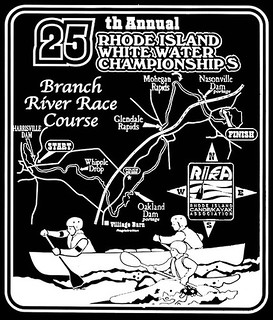 Logistics and insurance finally became too much for the group and the race ended in 2005, but we still try to get a group together to run the river as close to that date as we can. This year our “icebreaker” paddle was scheduled for Sunday, but cold weather (23° at the put-in) kept even the most determined paddlers away. Only two hardy paddlers (or maybe crazy paddlers) did the run – me and long-time p-netter TommyC1. Another long-time p-netter Wickerbut came to the put-in to help us with the shuttle.

The run itself is about 7 miles – mostly flatwater, some quickwater and 3 small class II rapids (Whipple Drop, Glendale and Atlas Pallet). With an early ice-out in January, and warm temperatures in February there was very little ice to break on this trip. Three nor’easters in the past month did dump a lot of trees in the river, but fortunately nothing that we need to portage. The river level was OK, and as long as we stayed out of the wind, the sun felt nice. 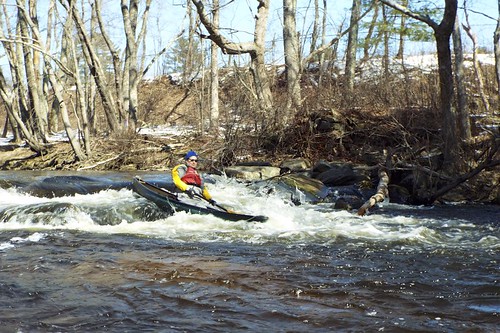 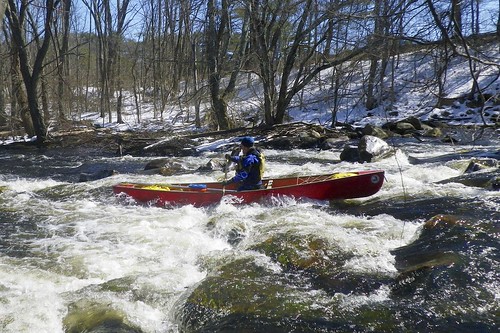 The run was fun and uneventful. As we approached the take-out, we found another long-time p-netter Riverstrider paddling upstream to meet us. As the sun came out and the day warmed he had a change of heart. We met Billy for a beer and a burger at a local pub – can’t beat that.

Good to know that TommyC1 is shuttling getting around, even if not on PNet.

I’m fortunate that some of the old p-netters are my local paddling crew, so I still see them regularly.

brrrrr 23 degrees and whitewater, another reason to canoe, sprayskirts get really difficult to put on and take off the boat when it gets that cold, hope you ran the dry lines.

I like a fire when it is that cold! Anyway to build one in your canoe?

From Ville to Ville,
of Harris to Nason,
many dam drops and boulders,
suits for paddler displacin’,

whilst other old RICKA’s,
gone a RICA-c-split,
suit selves in Souhegan and Wildfire
which dryly suits two outfit.

@canoeswithduckheads said:
From Ville to Ville,…
This is great - sometimes it takes me a while to figure these out, but I always get a good chuckle - thanks. I’ve been saving these for a while now. Someday when you are a famous poet, I’ll be able to say I knew you when…
http://eckilson.blogspot.com/search/label/canoeswithduckheads

Not really whitewater, just a couple of drops to run. We didn’t take pictures of the 7 miles of flatwater.