Not my first choice, but a fun run on the Upper Millers

My original plan was to do the Black River in VT. It would have been a 3-hour drive for a 5-mile run, but it looked nice, and would have been something different. Unfortunately, the weather was predicted to be bad and the river came up beyond the level the leader was comfortable with, so the trip got cancelled. Fortunately, it saw that there was a group paddling the Upper Millers, and that is only an hour away – problem solved.

I dropped off my boat at the put in, and stopped to check out Doanes Falls on the way to meet the crew at the take out. When Doanes Falls is running it usually means a good run on the Upper Millers - it was running nice. 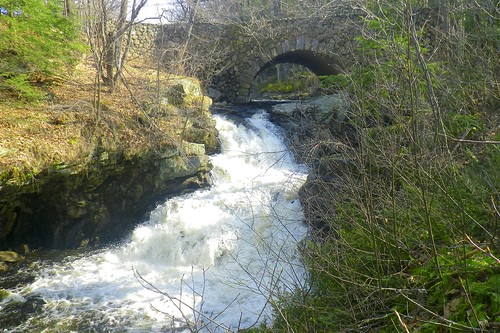 The run starts off with a couple of class III wave trains and a big surf wave. I did a couple of jet ferries at the surf wave, but it was a little too big for me to do any surfing.

Great pictures, thanks for sharing. It looks like some artist(s) had their way with a few of the group’s boats.

Millbrook boats - not sure who the artist is - probably John Kaz who is surfing in the red boat. He is the owner.