Nothing like the smell of WRC at the end of a nice day.

I’m refinishing a GP I made for my grandson. I used Tung oil on the paddle except for the blade tips. I used GFlex for those. The entire paddle had mildewed except the tips.
I find that strange.
I just sanded the whole paddle except the tips. Tomorrow I’ll GFlex it all and protect it with spar urethane.
It’s humid here and the paddle has been stored in the garage.
The one on the wall in the den hasn’t mildewed at all.
AHA!

I used boiled linseed on mine, the Klean Strip version. It also white wood, not cedar and I do store it indoors in the dining room. No mildew at all. Maybe that’s the issue, don’t store it in the garage?

I’ve read that Western Red Cedar decks develop mildew and have to be cleaned with an oxygen bleach, then refinished. Lots of work.

Luckily no long bouts of humidity here and my WRC Lumpy looks great. It hangs in my den during the winter and because the air is so dry, I oil it (100% Tung) before I put it on the wall, then again in late March. 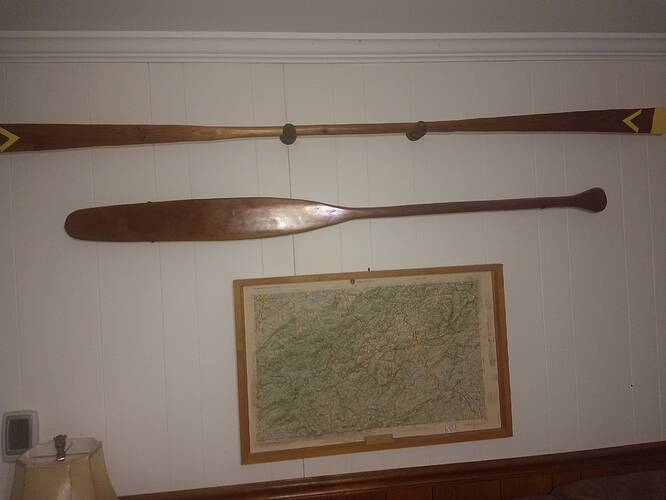 I have a literal pile of WRC Greenland paddles, some are quite old, but none have mildew and most stay in the garage. I live in hot, humid Central Florida. Most are finished in pure tung oil, a few are Linseed oil. I don’t wipe them down after use, in fact, I avoid rinsing them at all after being used in salt water. Old-time wisdom is that the salt is good for preservation. Whether true or not, no mold on mine.

@string said:
I have 2 paddles I’ve made on the den wall. Don’t think I can get away with more.

I would tend to agree with gstamer about the salt being good. Central Illinois where I live is a long way from salt water so don’t know first hand. However I have an old Browning rifle with what is known as a “salt stock.” Salt is a drying agent so they used a coating of salt on stock blanks to cure and dry them faster. Worked fine for that but some salt remained in the finished stocks and caused the guns to rust badly. Jim.

@string said:
I have 2 paddles I’ve made on the den wall. Don’t think I can get away with more.

There is no longer a canoe so it is a proud representative of the past. I only tried it once in the Rapidfire and almost rolled it.

never heard of WRC mildewing… I have three boats planked with WRC and nary a mildew have I ever seen… And I have friends with the same boats in hot subtropical climates… No mildew… Sea air and humiditiy does corrode brass tacks. But as mold and mildew DOES happen ( Like on our WRC clad house!) I suspect the it was from long term exposure to humiditiy in a damp dark environment… The boats are stored high and dry in a ventilated garage My mold corner is in another garage and I breed mold in front of the dryer vent in a dark corner. ( the dryer is vented to the garage and I am supposed to open the door when its running… that often does not happen)