Had a sit down Mexican lunch today. We have to have single use menus. This one was on a phone app and worked well. What will they think of next. 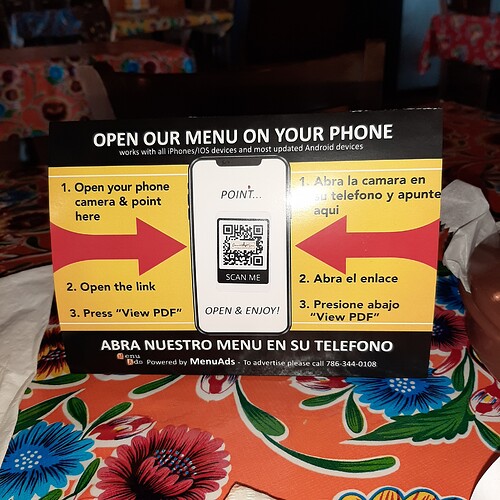 Think I’ll stay home and have cereal instead.

That is cool for those who like that sort of thing.
Maybe I’m getting old. Anymore if I see a shift to less customer service, I just leave. But I’m the guy that leaves a cart full of stuff un purchased at the store when they say I need to use self checkout.

I don’t think it’s a matter of customer service as we are mandated to have temporary single use menus. I was picturing a bunch of copies that would be disposed of after every customer touched them. This seems neater and probably more cost effective.
And now I have their complete menu on my phone

Actually, right now about anything a business can do to stay alive is good.
My favorite restaurant looked unfamiliar last night with the adjustments they’ve made!

Wouldn’t work for me, no smartphone and no plans to buy one soon.

Another way to do single-use menus is to print them and put under glass tabletops, if the restaurant already uses those. I realize this is unusual but I saw it done long before COVID-19.

Or put up large blackboards or Dry Erase boards in several places around the room.

That’s certainly a menu following the spirit of contact less . We have some with printed throw aways. There are some cleaning laminated menus.

Wouldn’t work for me, no smartphone and no plans to buy one soon.

neither do I and don’t plan on getting one

alas, us troglodytes are being pushed outside the tent, left to fade away (mixing a few metaphors)

I just got an email, notifying me that an item I ordered from REI is available now and for me to go to the store, then “push a button on the email” (ie from phone) notifying them I am there to pick it up.
Ugh.

I’ll provide a different perspective…I’ve been in the tech industry for almost four decades and have been using smartphones since they were first available.

I have never used a QR code (which is how the menu mentioned above works). And here’s why…a QR code could be used to install malware (bad software) on your phone, tracking your keystrokes, grabbing your passwords, etc. At minimum, it probably installs tracking software.

A small restaurant will not have created this software themselves…they probably used a third party that provides this capability to many restaurants. And that company has a variety of incentives to do things beyond just presenting you with a choice of burgers or tamales.

First Robby the Robot,
then Hal at the door,
our forbidden planet,
ever in its techno war,

where we congregate distants,
still to dine socially,
Plan Nine did not cover Covid,
continuing these space oddities,

whom did ask who killed J.R.,
but then who gives a damn,
when it’s masked QR that gets ya,
malwares-out each girl and man,

and as we cough through our masks,
some hot sauce dripping to chin,
Coronas swilled come a byting,
and tamale we might phone it in.

Salud to Covid tech-tacos, el have and have-nots!