I was up at 4:00 a.m., and met my buddy Paul at 5:00 a.m. for the early morning drive up to the Westfest on the West River in Jamaica, VT. We left early so we could meet a CTAMC group at 8:00, but those plans went awry when I took a sleep-deprived wrong turn along the way. By the time we reached Jamaica State Park, the CTAMC crew had already taken the shuttle up to the put in. No problem. Charlie was waiting in the shuttle line with his Ocoee, so I paddled solo for the first run.

The shuttle started at 8:30, but the release wouldn’t ramp up to its full level of 1500 cfs until around10:00. The water was a little lower with a few more rocks to dodge on our first run, but I liked it. 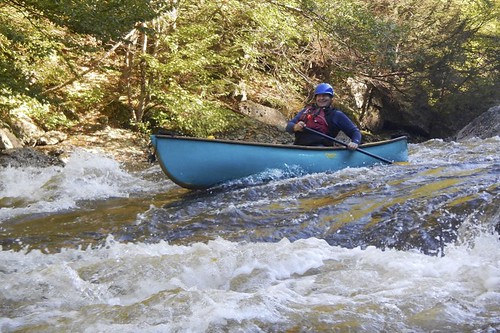 As I pulled my solo boat in at the take out, I saw Dave waiting. We had made arrangements for at least one tandem run in his Caption – we ended up doing two.

By the time we got on the river for our second run, the river had reached its full release level. The rocks were now buried, and there were lots of long wavetrains. The Caption is a great boat, and very stable, but we had a hard time keeping water out. Maybe it was just poor route selection by the bow paddler (me), but we had to pull over to empty the boat after pretty much every big rapid. Still, I had a blast bouncing through the waves in the bow. B)

With a little confidence after a successful second run, we decided to hike up to the dam to run Initiation on our third run. Initiation is by far the largest rapid on the river. Of course, we filled up with water in a big hole at the top and got spun around backwards. Fortunately, we made it to an eddy before tipping over, so that doesn’t count as a swim.

Self-rescue complete, we ferried left to avoid a big rock on the right, and then rode the waves down to the bottom of the rapid where we emptied the boat again. The pattern repeated itself for the rest of the run. 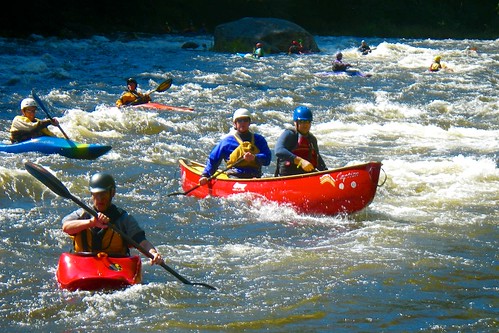 Canoes were outnumbered 10 to 1 (as you can see in this pictures), but it was nice to see a few other open boaters on the river. Unfortunately, there is always too much going on to take many pictures, but here is what I have.

The Caption is a nice boat. I have both a Caption and a Caper which have rather similar overall dimensions. The Caption has a bit more rocker and the stems are kicked up more.

The Caper will take more water in at the front stem in large waves, but the Caption seems more prone to take water in over the sides amidships. My daughter and I have had so much water in the Caption even with end bags and a small center bag that both gunwales were underwater at the center, which makes a pump pretty much useless.

It was mostly coming in over the sides. Every once and a while I would get the lean right to block a wave, but mostly the water just pored in. No pump in this boat, but we would have overwhelmed a pump anyway. Still, such a fun boat to paddle. Very different from the real old school Mohawk Whitewater 16 that I usually use for tandem paddling - and a lot tougher to paddle when it fills with water.