i got this canoe and im not sure what kind it is and i dont think the web in the middle is the right one. I think its fiberglass but i could be wrong i hope so because thats the supplies im getting. the gunwhales look plasitic also. I want to fix it up but im not totaly sure what ive got here? 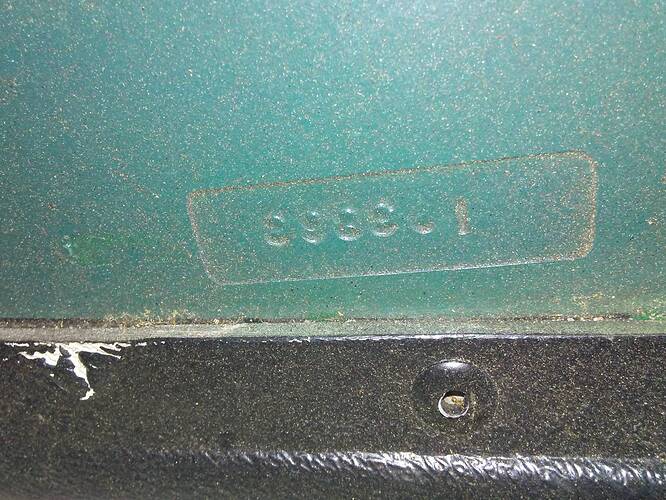 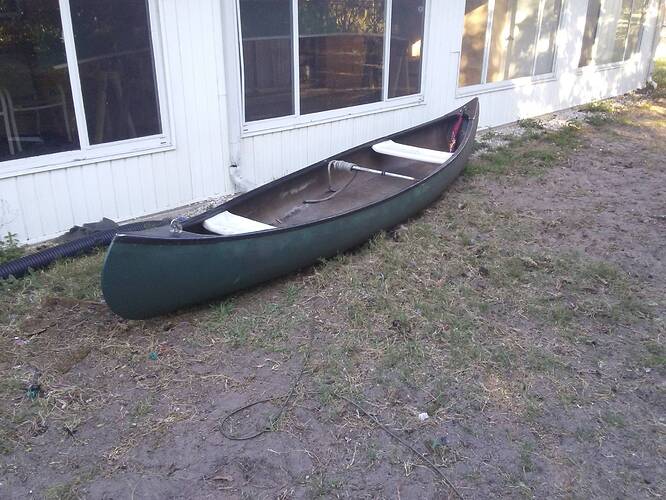 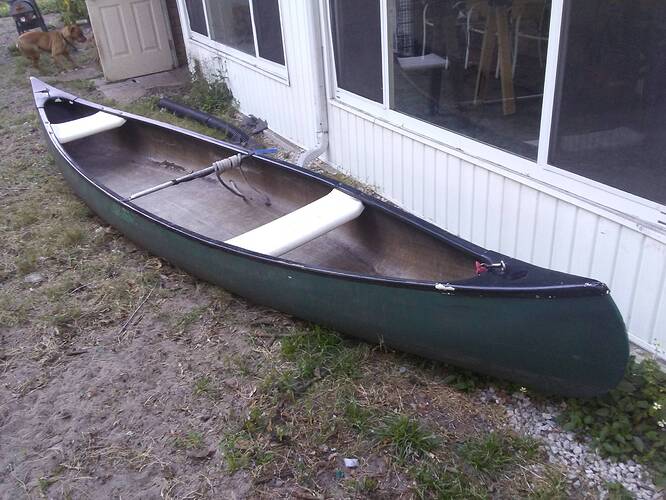 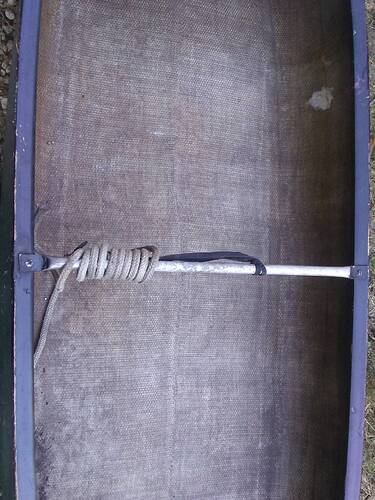 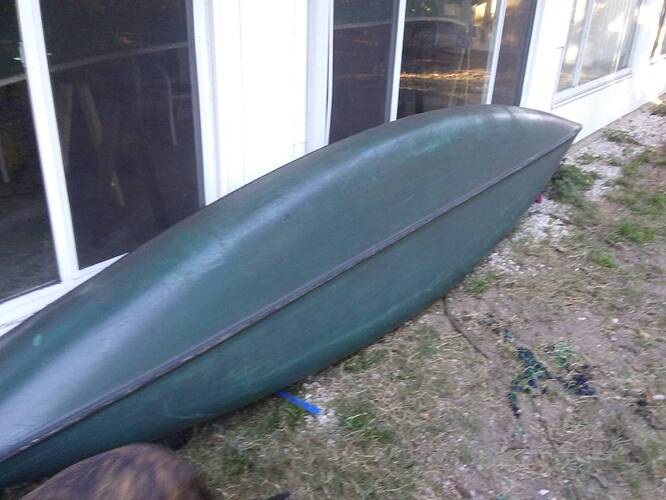 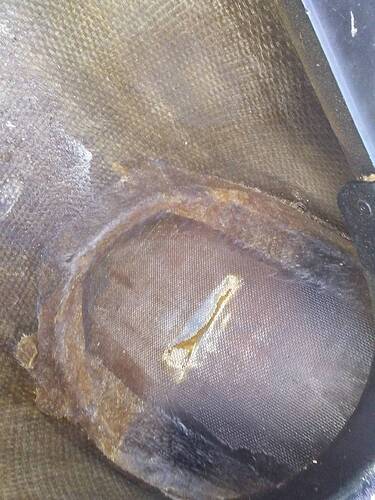 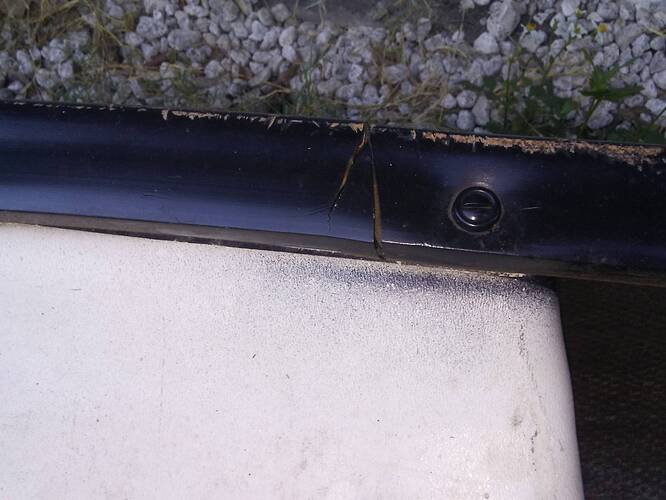 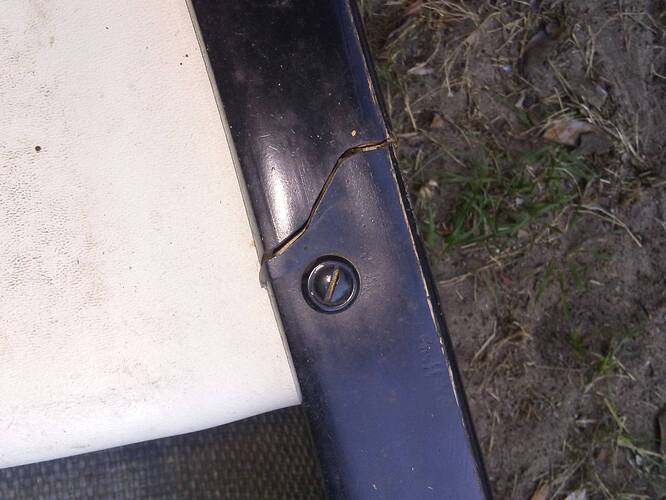 I know its fiberglass inside. Can anyone tell by looking if this is like a polyester gelcoat type stuff on the exterior? will the west system epoxy bond to this sanded real good?

I intend to repair, roll a couple coats of epoxy and the paint with the interlux primer and paint. Is this a good repair?

And wooden yoke. maybe a couple I was thinking wrapping the gunwales with some fabric and resin maybe ?

That boat needs a lot of work, relative to its actual value, but resurrecting dead boats can be fun.

There are a few experts here on fiberglass repair, and I’m surprised they haven’t chimed in (maybe the fact that “Old Town” was in the title made them think the boat was Royalex or poly). I’ve never seen fiberglass that looked so “bare”, more like raw cloth than resin-saturated material. I can’t offer much help on fiberglass repair that someone else here can’t do better.

As to the gunwale break(s). I tend to doubt you’ll get a really good repair just by wrapping the break area in fiberglass, though I think doing so is a good idea, at least if you can get it to bond well. I’d probably stiffen the area of any break with two strips of aluminum, roughly 1/8th of an inch thick, attached to opposite sides of the gunwale and bolted through with small-diameter bolts of stainless steel or brass. I’d make the strips 1.0 to 1.5 feet long to minimize stress on the needed connections.

The gunwale only needs stiffening against lateral bending, because up-down flexing action is already prevented by attachment to the hull. Still, either of two ways of attaching aluminum strips would stiffen the gunwale as needed. You could put one plate on the top and one on the bottom of the gunwale, or you could put one strip on each side. The mechanism by which the pair of plates/strips would stiffen the gunwale against lateral flexing would be completely different for these two methods, but either would be fairly effective. What flexing you might get after such a repair would be due to the failure of the gunwale material to maintain its proper cross-sectional shape due to some kind of “squishing” action (that’s highly technical jargon, you know). That problem would be greatly reduced by putting reinforcing strips on all four sides, and especially if you could reinforce the gunwale from within, but I’m not sure either would be worth the trouble.

Of the two methods, placing one plate on the surface facing the inside of the boat and one on the outside would be easier, because both strips could be the same width, even matching the full height of the gunwale material. Also, providing the strips with proper curvature to match the curvature of the gunwale would be a simple matter of bending them.

If you placed one strip on the top and one on the bottom, the bottom strip would need to be narrower than the top strip, that is, if the top strip were full width. Also, providing the necessary curvature in this case would be more difficult. The strips could be cut into the slightly curved shape from a wider plate of stock material, or they could be curved by strategically cutting a series of narrow slots (simple hacksaw cuts would do the trick) which then would be bent shut and welded. Most people wouldn’t have the tools/skills for that, but the shaping part would be easy, and a welding shop could weld all those notches shut in five minutes, so it couldn’t be that expensive to hire that part out.

Someone might have a better idea for fixing the gunwales, but this method would be pretty straightforward.

It is impossible to tell from the photos but the exterior treatment on the boat is probably some type of gel coat, which is generally a polyester material. Yes, epoxy will cure over gel coat assuming it is properly cleaned. The reverse is not necessarily true. Polyester gels and resins will not necessarily cure when applied over epoxy, even after the epoxy has thoroughly cured.

You should be able to remove the crude center thwart and replace it with a wooden thwart or yoke. Look at Ed’s Canoe or Essex Industries for thwarts and yokes. Use stainless steel machine screws and nuts for installation.

To answer your question, yes I have repaired cracked and broken synthetic gunwales with epoxy and fiberglass cloth. If the gunwales appear to be a plastic material, your best bet is to use West System G Flex epoxy. Conventional epoxies may not bond well to plastics. I have mixed graphite powder in with the epoxy which colors it black, of course, and also provides UV protection.

Using metal strips to brace the hull against flexion as Eric suggested would certainly work. But if I interpret your photos correctly, you have breaks in the gunwales at two places, both in proximity to where machine screws penetrate the inwale portion of the gunwale to suspend the seats. The stress of the paddlers’ weight is likely what caused the breaks, My concern is that without repairing and reinforcing the gunwales at these points, the machine screws will break completely through the inwales, which I have seen happen.

Thanks for the ideas and info! Helps a lot.
I got this canoe for almost free, traded 150lb crossbow for it. So i got some room to spend a little on it, otherwise it wouldent be worth the work. But im gonna see what i can do with it…i cant wait to do some paddling.

When i get started ill do pics and all of the process.