This is on FBM. The seller doesn’t know the model.
Looks like it’s missing the rear hatch cover. Or something is going on back there.

Any ideas of the model, and would it be plastic or fiberglass? It looks like my Sealution, but it doesn’t say Sealution on the bow. So IDK.

I recently sold an original Sealution (not the II) and I looked at a lot of boats to figure out which it was. While those pics look like a Greenland-style sea yak, I’m not convinced that it is either Sealution model. I would also guess from the two-tone color scheme (and the reflections) that it is not rotomold material. I’m pretty sure I recall that Harrie Tieken designed some other, similar boats for Wilderness. Wilderness was aquired a few years back by Confluence (along with Perception, Dagger, Mad RIver, and some others) and Confluence was itself acquired last December by Pelican. Nevertheless, the Confluence people did attempt to answer my questions. If it’s really important, I could try to dig up the addresses…

Thanks for your help. It’s not super important. The seller wants 350$ for the boat, and it looks like it’s missing the rear hatch cover. Also seems like it had a rudder but it’s gone?

I have a Sealution II, but would much rather have a composite Sealution. Looking at the WS logo on this one, it looks pretty old. I believe the Sealution was their first sea kayak?

I was thinking the same thing about the two tone meaning it is composite. I asked the seller and he thinks it’s plastic, but he wasn’t sure.

Just curious, how much did you sell your original Sealution for? I paid 350$ for my Sealution II, and then replaced some small parts like bungees and rudder cables

Send the Serial # and photo to WS . They can ID.

I just asked the seller for the S/N. If he can find it I’ll send it to WS and see what they say.

So it was made in 1991. That’s all I know. I also got a pic from inside and it looks like fiberglass 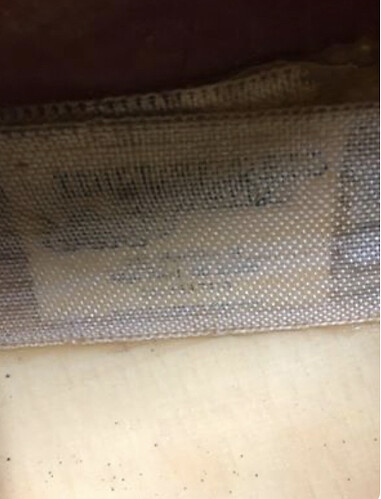 I couldn’t find an email address for WS, so I asked them on their Facebook page about this kayak. They said their serial number records didn’t go back that far, and to send them some pics of the boat. So I sent them a link to the ad with the pics. They responded back that they weren’t sure which model it is, and maybe I can match it to a model in their 1992 catalog (already tried that).

It’s a glass boat. Doubtful anyone at Confluence would have any record of the HIN on that one, given how old it is (I’ve been selling Wildy since 1996, and that logo isn’t even vaguely familiar). Looks like a Sealoution from the bow profile.

$350 for a 30 year old boat with an uncomfortable seating system would be a hard pass for me, but YMMV. If you can get it down to $250 and then apply the diff toward a seat that won’t put your lower extremities to sleep, maybe.

It will probably be on FBM for a while. The guy might end up accepting 250$ for it.

I agree about the bow. I couldn’t find any other kayak in the 1992 WS catalog that had the same bow profile as that (the Sealution).

What seat would you use instead? Keep the bottom cushion and use a back band? I think my Sealution II has a similar seat, and it’s not the most comfortable after about an hour paddling.