On canoe packs. An old debate

I’m sure this is going to spark a lot of debate. I’m guessing there are some strong opinions about canoe packs.
First, let me sidetrack for a minute.
Back in the early seventies, in the hiking and backpacking world, Kelty reigned supreme.
But Kelty refused to make their packs waterproof. Said it weakened the material and it was better to use a pack cover. Meanwhile, other companies made their packs waterproof. Kelty lost that fight.

I have a number of books by Cliff Jacobson. I may even have all his books (You’re welcome, Cliff).
My most recent purchase was Canoeing Wild Rivers. Once again, Cliff expresses his love for Duluth packs and his disdain for dry bags. I’ve gotten a lot of good tips from Mr. Jacobson, but I don’t agree with him on everything and this is one of those things.
A number of years ago, I invited a friend, from Madison, to come out west for a canoe trip down the Green River. He brought traditional canoe packs and I used dry bags. Next trip with him he had dry bags. They are more convenient to use and they keep your gear dry, even in a capsize.
Cliff Jacobson is also a huge fan of tumplines. I’ve done a ton of backpacking from the coast of the Olympic Peninsula to the Smokie Mountains, and I don’t think I’ve ever seen a backpacker with a tumpline. One reason, maybe the only reason, is that backpacks have hip belts and Duluth canoe packs don’t. Here, again, is an advantage of dry bags. You can get them with hip belts. Most people prefer a hip belt over a tumpline. Yes, you can buy traditional packs, from other companies, that have hip belts, and I’d recommend that, if you don’t go with dry bags.
I’ve read all of Cliff’s arguments, in favor of Duluth packs and against dry bags, and he makes some good points, but I prefer dry bags. If Duluth packs work great for you, that’s fantastic, but if you haven’t tried dry bags, I think you are missing out.

I know Cliff’s opinion regarding Duluth Packs. Here is another written by former head of canoeing instruction at the Nanatahla Outdoor Center Gordon Grant, taken from his book “Canoeing”:

“The traditional pack of canoe travel is the Duluth, a large squared-off duffel bag with shoulder straps attached. Duluth Packs are made of heavy cotton and last forever. Traditionalists love to stuff these monsters with gear and carry them with a tumpline, an ancient method of carrying loads. The tumpline runs under the bag and around your forehead, no shoulder straps, just neck and back muscles twanging. It is as bad as it sounds. Devotees of the Duluth Pack then stagger around bellowing old French-Canadian voyageur songs. If you go this route, be fully traditional: take several casks of rum to ease the pain.”

Of course, Gordon is laying it on a bit thick but I am more aligned with his opinion than with Cliff’s. I still have four Duluth Packs in various models and sometimes use them for car camping. Many years ago, I did use them for northwoods canoe-camping trips and portaged many times with them for trips lasting up to two weeks so I know very well their virtues and inadequacies. Duluth Packs seem to be most popular in the northwoods areas of the US and in Canada.

Gordon is wrong about one thing. Duluth Packs do not necessarily last forever. Although the cotton can probably be patched indefinitely the leather straps will weather and crack if not maintained and are prone to mildew in some climates depending on how they are stored. The canvas material is heavy when dry and even heavier when wet and does not dry quickly. The thick leather shoulder straps on most models are not contoured and tend to cut into the shoulders when carried any distance. There are no hip belts or sternum straps like the suspension systems of modern backpacks. The unsophisticated envelope design does little to balance the load on your back. What is worse, since they have now become trendy and “retro” genuine Duluth Packs have become quite expensive and now cost as much or more than many high quality modern portage packs.

As for tumplines, proponents usually point out that the strap should go over the top of the head near the hairline rather than around the forehead putting the load on the cervical spine in a more axial direction rather than pulling the head back. Proponents also invariably mention Sherpas and members of ethnic groups that have carried loads on their heads or use tumplines regularly. They fail to mention that these people have been doing this since early childhood and that their cervical spinal musculature has adapted to the load. I have cervical disc disease having sustained a ruptured cervical disc in 1990 for which I required surgery. Cervical disc disease is very common in the US. Most people who would be using Duluth Packs with tumplines in this country are weekend warrior types who have not been bearing weight on their heads since childhood. Anybody with cervical disc disease who intentionally applies and axial load to their cervical spine is either a masochist or an idiot, or perhaps both.

One virtue of Duluth packs is that the generally formless nature of the envelope packs allows them to be jammed into spaces that some more modern packs might not fit into. The lack of a belt means there is less to get caught up or get wet. The top of the pack also sits low allowing one to portage a canoe on the shoulders and a Duluth Pack simultaneously.

Personally I would never use Duluth packs for any type of tripping that requires the pack to be carried more than a couple hundred yards. There are more modern portage packs made by Cooke Custom Sewing, Granite Gear, Kondos Outdoors, and Ostrum Outdoors many of which cost less than you now have to pay for a Duluth Pack. If you like the traditional envelope, low-rise design of the Duluth #3 pack one such option is the Granite Gear 3.5 or #4. These are made of Cordura, have a drawstring overflow closure which the Duluth Pack lacks, have a low-rise design, a padded hip belt (which can be removed) and contoured shoulder straps with a sternum strap. While not as comfortable to portage long distances as a purpose-built backpack, they are much more comfortable to carry than a Duluth pack.

You can use a heavy clear plastic pack liner in these just like a Duluth Pack. For water-proofness I prefer to use multiple lightweight sil-nylon roll top dry bags in sizes ranging from 8 to 20 liters and in different colors. These bags add very little weight. The material is thin and would probably not be very durable if used outside of the pack in a canoe but protected inside the pack they are fine. The different bags and colors allow gear to be organized in a way that makes a single item more easily accessible than just dumping everything into one big bag.

Another option is to use a big roll top portage duffel with shoulder straps made out of the heavy hypalon material like the NRS Bill’s Bag. These work pretty well if you have a few bulky items you need to keep dry that won’t easily fit into a smaller dry bag like Thermarest pads and sleeping bags. But the roll top on these allows even less access to the bottom of the bag than a Duluth #3 or #4 does so I don’t like them for carrying a lot of smaller items. 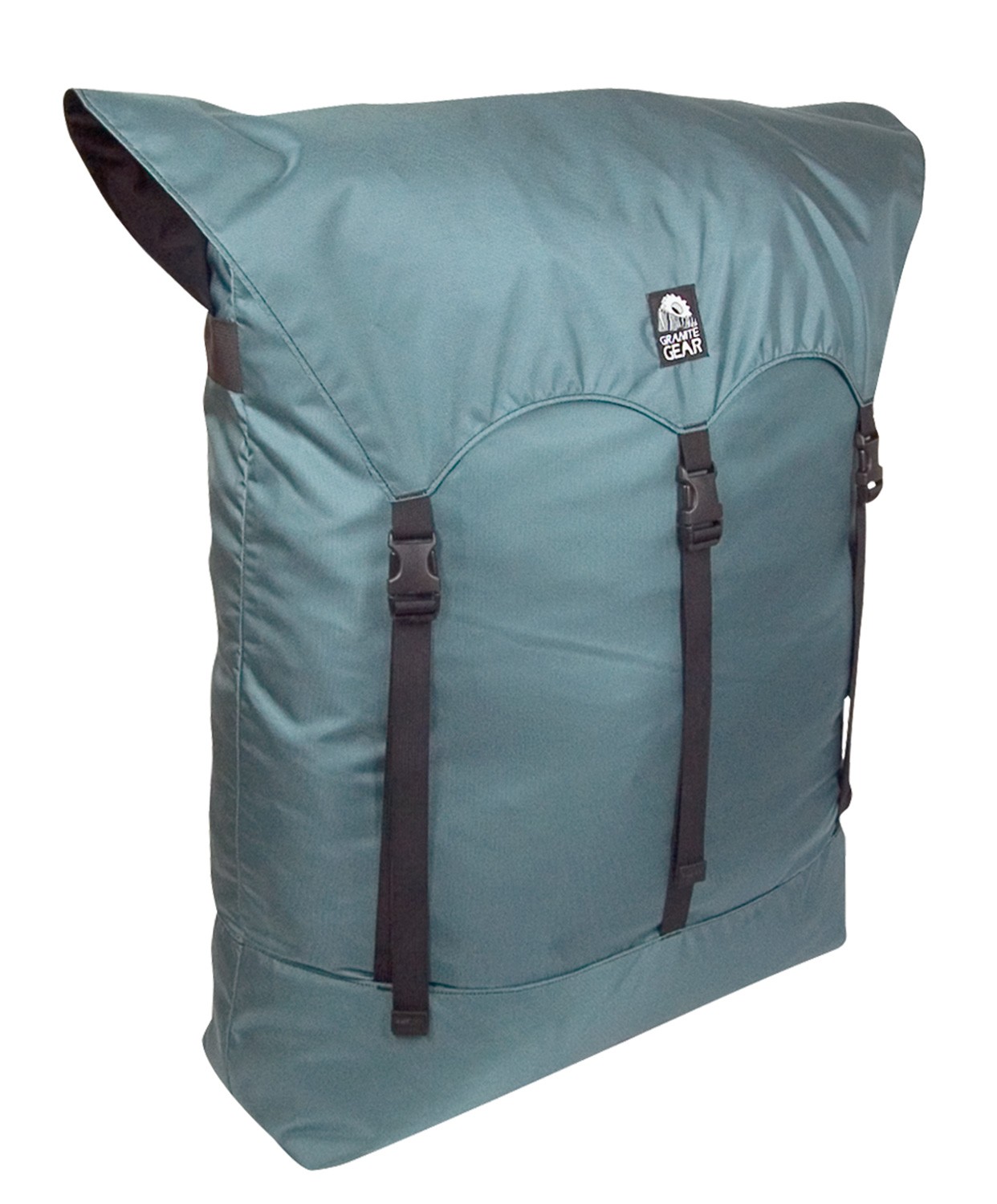 “Canoeing Wild Rivers” changed everything for me. I have used Duluth Packs for decades but also have some dry bags. but I like wood and canvas canoes, , handmade paddles, other traditional canoeing equipment.

I am with Pete. I use drybags but not those 115 l horrid to carry for three miles huge unsupported dry bags: while they have a hip belt they have no vertical support. I use a Cooke and an Ostrom canoe pack which both have internal stiffeners with a dry liner and pack my holy articles that must never be wet in smaller dry bags. Double dry bagging is the way to go.
Duluth packs are not indestructible…mine were chewed by mice years ago. Tumplines were made out of necessity by voyageurs. Every inch in their canoes mattered and they were all small people ( to make more room for cargo) and most were French Canadian farmers who carried hay bales with a tump arrangement all their lives They sure were not keyboard warriors in a chair!

So OP there is a third and actually a fourth ( blue barrel) canoe pack type.

My canoe packs have both hip belts and tump lines. Occasionally I do like the tump for a short distance as a change in muscle pressure but my pack is never over 35 lbs.