On the water today but not in a canoe or kayak

Windy with some high gusts before the Gulf weather started coming in at 4. Sailing was exciting.
Put in at noon. just before the Flying Scotts put in for their racing. Clint was there when we got there with his Potter 19 on the water at the dock. Met Dutch on the dock and he said he was crewing on one of the FS in the race. He also has a Potter 19, which makes 3 in the Club.

I left the gas tank for our 5HP an hour away at home, so I left and returned to the dock under sail. I recently took my 110 down and put up the Genoa. Loaned my 110 to Clint so he could have his worked on. We have been having light winds which the greater sail area of the genoa is made for, but not today. I found the Genoa made for exciting sailing in the gusts, and furled it part way in. It wanted to luff early when close hauled. The 110 would have been better.

I furled my genoa in some when the winds picked up, but didn’t reef. The sailing was fun, but there were “Lots” of Pontoon boats and power boats out and about. Had to keep a close eye on all the boat traffic. Often had boats coming my way from 3 or 4 different directions much of the time. Clint sailed out with us. He had his jib furled in so I did the same and tacked back to him. We sailed along after that.

Being retired I tend to avoid the lake in the summer, on the weekend, but wanted to take advantage of the wind today. It is calling for rain most of tomorrow. Looked like a lot of party boats out today.

I saw the deputy that I pulled out of the water last summer patrolling today. He waved as he passed, and Carol and I waved back. Tricky lake winds in the club cove, but I managed to sail in, and slowed down doing a speed safe to just bump the dock.

If you happen to wonder why there are no photos, Well…
I forgot my Nikon water proof at home, and left my phone in the car unintentionally in a hurray to beat the FS fleet. Truth is the winds and the boat traffic kept me plenty busy, but Carol could have taken a few. Next time i will try to do better. Drove through rain on the way home. Sailing was a welcome workout, until I tried to walk to the door after the drive home. but Worth it!.

Oh heck here are some photos of my Potter 19 from the past. The foresail in the photos is the 110, not the 150 genoa I was sailing with today. Someone sailed a Potter 19 from California to Hawaii. I would want a different boat for that. 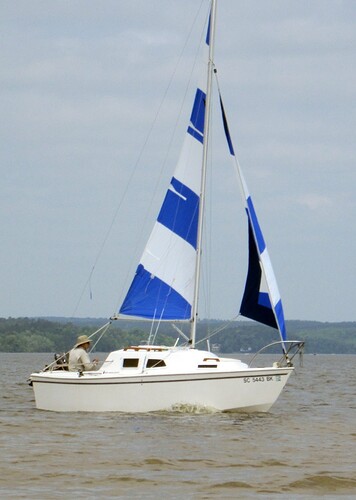 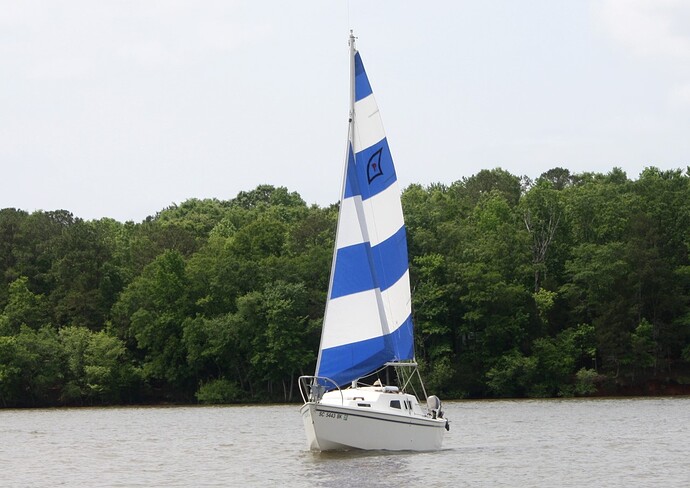 Were I to buy another sailboat, the Potter 19 would be high on the list.

For some people a boat means a canoe or kayak.

Some of us are “boat curious.” I still have a large aluminum power boat, several canoes and a drift boat. I had a Columbia 23 at Lake Tahoe for many years. I used to have rafts and several other sailboats. A Montgomery 17 is another cult boat on the West Coast something like a Westwight Potter. I had one and it could handle rough weather. They have been sailed to Hawaii too.

Being on the water is the thing. We were raised on it and even living in Nevada I get out there all the time.

I have seen only 1 Montgomery 17 for sale here in the east. A sailing friend at the club had one when living in California, now has a ComPac legend. He sailed with the Potter Yachters when he lived there. Good boats. I am drawn to boats under 20 feet. It’s like with kayaks being close to the water is appealing to me. I have a Wayfarer 16, and a boom tent. I love sailing the boat. hope to camp on it some at the coast.

That’s right. Being on or next to is the thing. I was raised in john boats and run a bouts, whatever they are called.
I’m about to adopt a Labradoodle and my kayaks won’t be big enough for long. Looking at a 2 man skiff.

You will finally have to learn how to back a trailer!

I can back a trailer. Into the flower bed, into the oak tree, up the hill into the neighbor’s yard.

Some old dog has to learn a new trick. Sounds like you are working on what not to do first…Good Start!

I like being on the water so much I sold my house and live aboard full time. 2.5 years now, and 5 years part time before that. I have a 38’ Tartan, would prefer to sail a smaller boat (previous was 32’ and about perfect size) but like the “extra room” in the bigger boat. I still am living in less than 200 sq ft. Almost went sailing today but it is difficult to convince myself sometimes to turn off the AC and go sailing when it’s summer in FL - kind of lousy when you get back to the slip at 9 PM on a Sunday night and the interior of the boat (aka my house) is 94 degrees and smells like diesel! Maybe next weekend…

It can be a lot of work but there is nothing quite like it either! Photo from a couple of weeks ago. 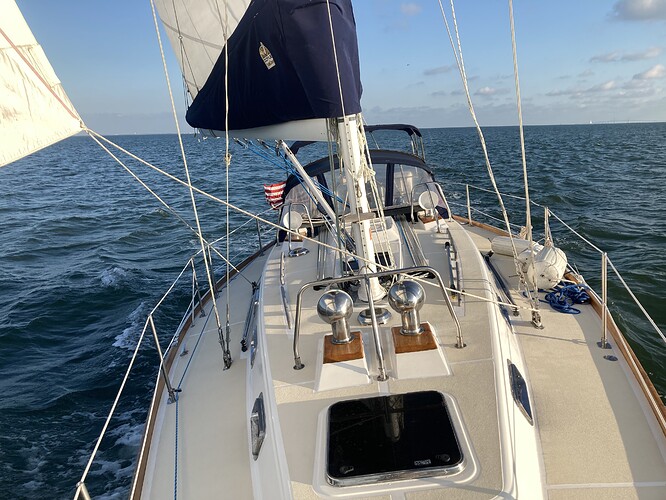 Very nice! If single I might do the same, but then I would need to do “lots” of down sizing. I do like a small boat for the simplicity and ease of sailing. I do like a small 4 stroke outboard even though I have a love hate relationship with boat motors. I added oars to the Wayfarer 16, and may never add a motor to it. When I am in my sea kayak I think I love it the best, and when in a canoe I think this is hard to beat. I feel the same way when sailing. They each have their charm and advantages. the less I use a motor the better I like it.

My sailing buddy emailed two photos of us coming in to the club yesterday where the wind dropped to nearly nothing, but would gust hard for a bit and shift directions. You can see the club in the background. The genny is partly furled in them, but I unfurled it for the last tack then furled it up and spilled air from the main to coast up to the dock. I was told many, many years ago to never approach the dock at a speed you’re not willing to hit it. I do like the quite of sailing. 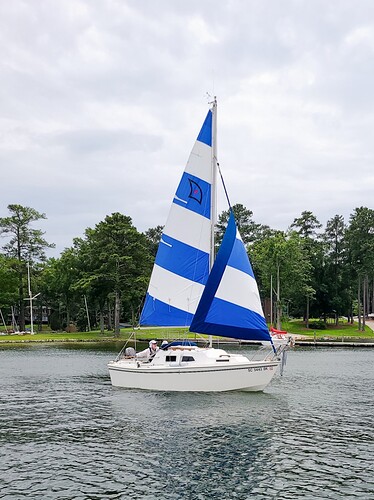 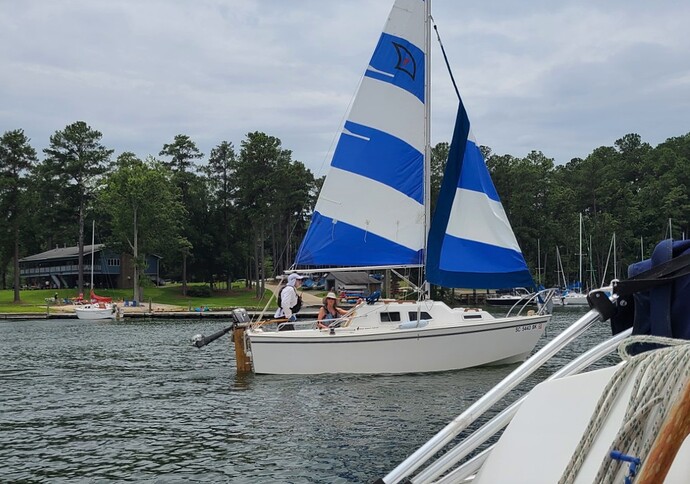