I have an opportunity on a good deal for a used Esquif Nitro outfitted with float bags and thigh straps. $600 and it’s usually around $2000 new.

I am wondering about the advisability of this boat for a beginning WW canoe. I’m interested mostly in going down-river through rapids, not in doing acrobatics or going over waterfalls. Maybe later for the more advanced stuff, but for now just river running.

These boats don’t seem to come on the used market often, and they seem to be held in high regard overall, so I figure I should not have too much trouble selling it should it not work out as planned.

If the hull and outfitting is in decent condition, it should serve well. I have only paddled the Nitro and the shorter Detonator a few times and generally for short distances when I was swapping boats with another paddler. The Nitro was an extremely popular boat years back and was generally considered user-friendly and dry.

It was never my favorite because I felt that the “double chine” design never really lived up to its hype. The chines were not distinct enough to offer the benefits of a sharp chine design such as the Edge, Viper, or Ocoee, yet introduced additional potential focus points for hull wear. On the other hand, the lack of a well-defined chine generally means a less steep learning curve.

I would inspect the boat closely inside and out along the lines of those chines and push in on the hull to check for weakening. Nitros and Detonators were known for wearing out along the chines.

sounds like a good deal to me. I say give it a go.

Like Pete, I’ve only paddled a Nitro a couple of times switching with friends. 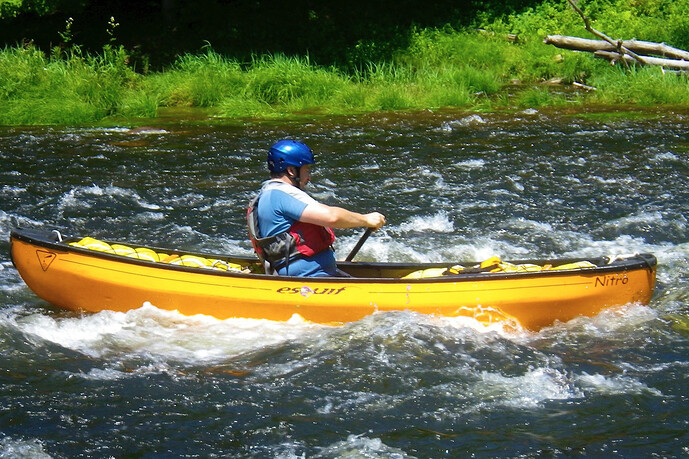 It was a popular boat in its day. It is a little “old-school” now (but not as old school as my 20-year old Encore). Its a boat that wants to turn and surf, so you’ll quickly find that its a lot more fun playing in the rapids rather than just running through them. I’d buy it, then take some lessons or hook up with someone who can give you some instruction - you’ll have a lot of fun.

Thanks everybody, that’s exactly what I am going to do. I’m meeting the seller on Saturday morning to buy it, and I have reached out to a couple instructors here in Richmond.