It does. Cool photo.

Okay, I guess I’m not paying attention and I’m thinking it could be a pond, lake, river, sea, or ocean. ?

Yeah it looks SUPER calm but I also have paddled the ocean like glass. It is ICE?

Look closely at the horizon behind him. It’s not land. It’s the edge of a ice pack.

There are reflections of taller objects in the BACKGROUND but no such objects on the “shoreline” there.

Thrrefore, the reflections are actually of objects behind the photographer, and the entire depth of field goes only a few yards back.

Yeah I can sorta understand. I guess if the photo was not so cropped (or panoramic) I could appreciate it a little more. It WAS very obviously a COLD paddle location.

@yatipope said:
Yeah I can sorta understand. I guess if the photo was not so cropped (or panoramic) I could appreciate it a little more. It WAS very obviously a COLD paddle location.

Too cold for Southern paddlers.

I agree with Pikabike about those reflections (perhaps trees?), and the whole premise of the photo makes me say “yeah, whatever”. Anyone can crop a photo to remove enough of the background that there is no real indication of what sort of place is depicted, and then point out that the scene might not be as it appears. That hardly qualifies as an optical illusion.

To me there’s allusion
lake lies finn its ice marker
where a lute or some in to it
make light yak, “It’s baidarka!”

Damn, no illusion about it, that’s a pretty hull! Inuit art on the side? Slightly more elongated fish eagle on the bow than Northwest Indian, I suppose. But what’s up with that Scarlet Macaw on the rear? Ice flow blow-in, I guess.

Well, this is more reflection than illusion but … 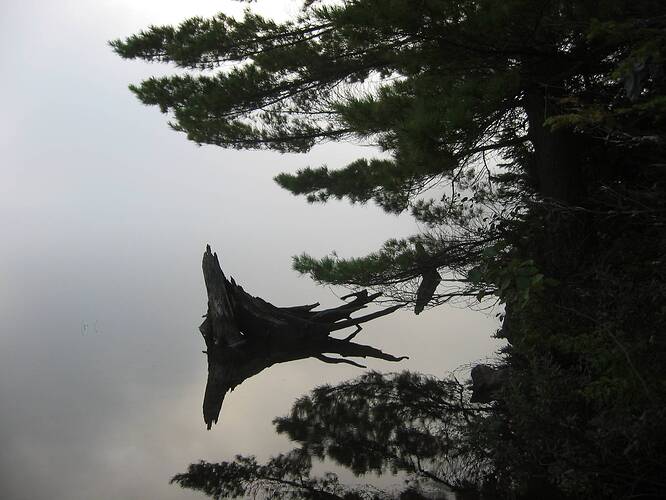 Doors of perception wear Rorschach’s ink blots
where much there is written by Parkinson’s jots,
so Huxley might see what illusion won’t tell
as this mess calls in both a heaven and hell 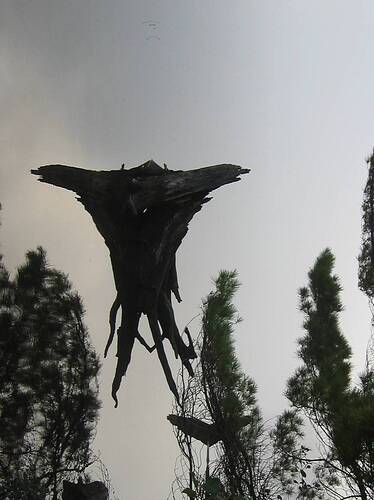 Sparky - not too far from you - Dunlop Lake.