OT-Space Aliens in the Streets of Md

Walking along a nearby road earlier this week, I saw something moving across the street my mind could only interpret as a space alien. The iPhone has better night vision than I do. The picture clearly shows a remnant of ballon. In the dark, I could make out the general shape of it and the several pinpoints of light that were being reflected back at me looked like little LEDs. There was a gentle breeze blowing giving the appearance of motion as this thing “walked” across the road. Not scared, but I was very puzzled. It was about 4 feet tall. I stomped the helium out of it and stuffed it in my pocket, just like I’d have done if it was a real alien.
~~Chip 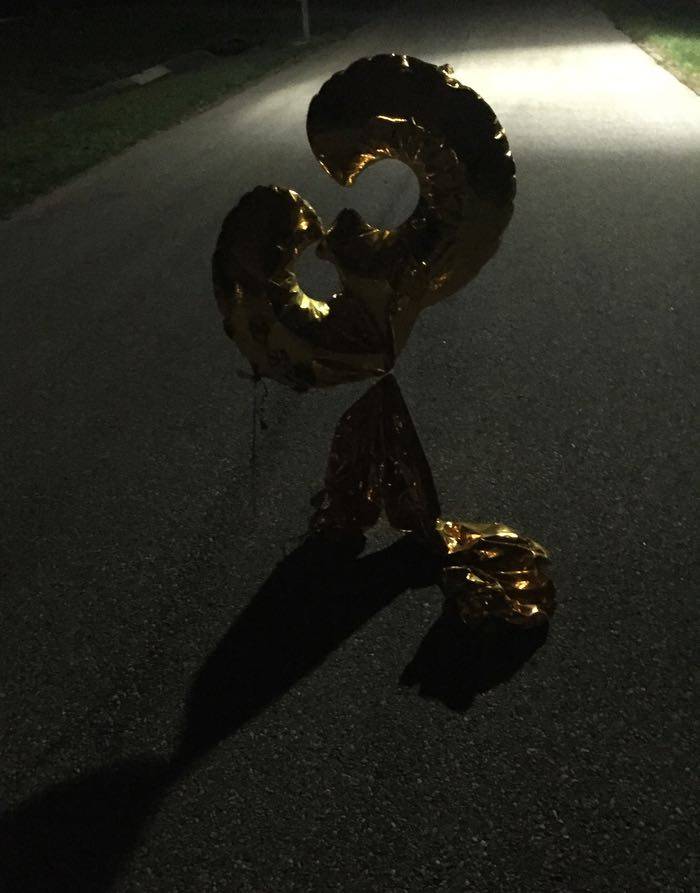 Try glycer rides
as wind bag suit
tricero flops
beneath the boot
my, my, lar menace
is outta space
to heal 'im’s digit
now primed in place
Chip off the block
can’t let it be
Goldfinger’s odd job
fally all in three.

You got away lucky: You could’ve been abducted by a “gray thing.”

I’ve heard that “gray thing” is sort of a “soylent green” for the Pamlicortons, which are an alien species dwelling within the Fortos Collinsector Galaxy. Rumour has it FatElmo was appointed Vice President of Milky Way Regional Sales, and is currently hammering out a deal with the fine folks at Hormel to market the stuff here under the canned banner, “Spamlico 14+7 - It’s Far Out Spam For the New Millenium!”

Good on you, Chip. Balloons blow.

I think I dated it once… but we drifted apart.