I bought Decathlon’s Itiwit X100+ inflatable kayak with this paddle.
As a beginner, my intent was to use it for small family trips, maybe some camping, or just chilling on a big lake.

Unfortunately I didn’t get a chance to even unpack it. Just a few days after I bought it, I fractured my wrist. Now I’m sitting here with my arm in a cast and thinking of ways how I might paddle after healing, which will take at least 5 weeks of wearing a cast and some therapy after.
The summer is coming and I want to be able to at least use it for short trips.

Does anyone know of a device I might use to transfer the forces involved while paddling and bypass the wrist?
It might be a dumb idea, but I was thinking of making some leather/plastic/metal/rigid contraption which can be strapped just above the elbow, maybe on the forearm too, with some kind of claw near my fingers, so the main pull will be transfered to the elbow.
Crude sketch: 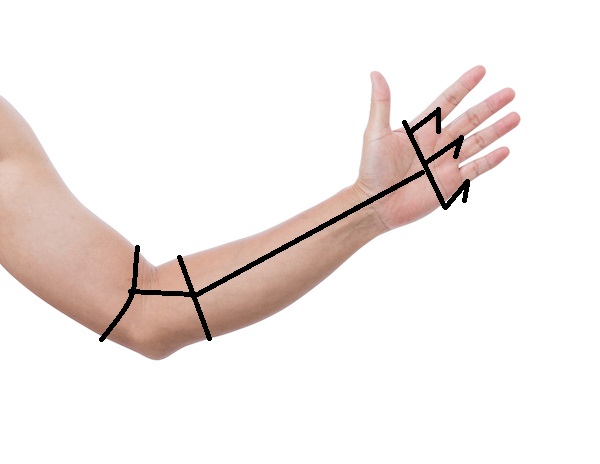 Anyone with a similar experience?
I’m open to any ideas and suggestions.

See a Physical Therapist.
When I was having carpal tunnel problems , I used a wrist stabilizer from the drug store.

i don’t ever use a kayak or a kayak paddle, so I can’t be specific to that particular maneuver with the double blade paddle. But I have raced canoes every year since 1997 in the Adirondacks, including 5 times in the Yukon Riiver races. During the first couple of years of my canoe racing, I suffered from painful wrist tendonitis and so did a couple of my canoeing partners. Then I began to analyze just what i was doing with handling the paddle. I do give it a twist to feather the blade through the air during stroke recovery, so maybe that is similar to the kayak paddle blade twist. But then I realized that I was unnecessarily angling my wrist, especially whan applying forward power. I discovered that if I kept my wrist always locked inline with my forearm, as if it was wrapped with a bandage, then that cured the probem. Not even when racing 1000 miles on the Yukon did I ever again have any wrist or arm pain problems.

With a fracture you need to give the bones a chance to grow together before stressing them with or without a brace. Age plays a big part in this and if you are younger the process goes faster. No one here knows the condition of your fracture and talking to your doctor about starting paddling is the one you should ask. Chances are about half way thru the healing process you should be fine for some easy paddling and trust me your body will tell you when you went to far.

A drugstore wrist brace or a wrap is all I would do after I was pretty sure I wasn’t going to damage it more.

Yes, there will be a check up with a Physical Therapist and some therapy, after they remove the cast.

I remember going to physical therapy for about a week when I fractured the same arm 20 years ago, but I don’t remember if there were some other restrains till it healed completely.

Hopefully you will have a tougher arm.

Thanks for the welcome.
I’m almost 40, so I’m aware healing won’t be fast. But I think there isn’t much damage (I haven’t even taken any painkillers when and since it happened, the pain is endurable), that’s why I’m considering paddling so soon.

I was looking forward to owning a kayak, even thought about buying a single touring kayak (Itiwit X500), just to be disapointed by my bad luck. Hence the eagerness.

For sure I’ll talk to my doctor and phisical therapist when the time comes, I just wanted to check if there are some braces or ideas which might help.

sure I’ll talk to my doctor and phisical therapist

Thats what i did back summer of 2013. My 62 year old body fell down on a boat ramp and broke my left wrist around June. An operation, plate and seven screws later put me on light duty restrictions and no river swimming. A couple of months later they said it was ok to get wet but keep the stress low…I paddled the Silver River with some drifter paddlers…the stress was light the paddling easy…but the others quit early…

Then i injured my knee…after that operation and a litte recovery time i was given clearence for activities. One needs wrists and knees to kayak.

Doc and therapist won’t have specifics on kayaking. But they will know about infections and stress. I would not brace or do a lot of artificial support. It didnt sound like you have a lot of experience. So the chance for injury is increased due to wrong moves or lack of skills. Your wrist will complain. Listen to it. Be wary of fingers that don’t work right after wrist exercise. Don’t push it . The wrist has tendens and nerves that go through there. Give the time to recover.

Something in the wrist would pinch and my fingers would intermittantly open close, open close twitches uncontrollable. I,d have to bring it in lay it palm down on tummy to calm it down. This cleared up with rest and a couple more months.

Not quite the same, but the day I received my new carbon fiber paddle, I had a ruptured disc. That paddle was my reward for being patient and healing properly. It took weeks.
You have time now to properly search for a boat.
Heal quickly!

Fractured bones need time to heal. I have had a lot of them.

I did a trip on the Colorado River once in February. It took long range planning way ahead of time. We got to the River and my brother was to be my bow partner but he had a sprained and mangled wrist. I figured I could control the boat from the stern and he could be a passenger most of the time. We wrapped his wrist with an Ace bandage and being the trooper he is, just started paddling. He was careful and able to paddle the whole time. It was unexpected. Be careful who you invite on a long canoe trip.

I had a minor wrist sprain last summer, far from the severity of a fracture. A wrist brace kept me paddling and I found a couple of features that might be helpful when recovering from a more severe injury too. My wrist didn’t like pressure in certain spots, and a brace with three straps like the one shown let me keep the middle strap looser which was more comfortable in my situation. With my mild injury, i also found that removing the splint still left me with enough wrist support, but interfered less with gripping the paddle. I did try four or five splints in local stores before settling on the one similar to the one in the picture. 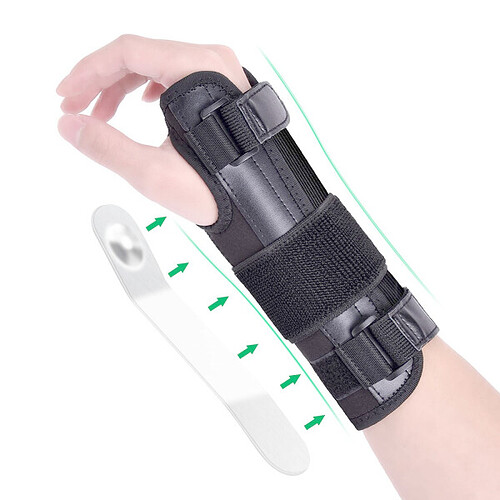 Don’t despair. I have broken both wrists (falling while ice skating both times) , a reverse Colles fracture on the left when I was 38 and a bad impact fracture on the right distal radius that required surgery and 3 screws to reconnect the shards and two weeks of a post surgery cast that I demanded the surgeon remove early because it was causing tissue damage (i wore a PT molded custom removable brace assembly for 4 more weeks while healing — I was 58 for that accident).

I recovered full mobility and strength in both wrists, I think largely because I was diligently cooperative about my PT exercises and used the wrists as much as I could during recovery. I have found that I can no longer do all day bike touring comfortably as I did when I was younger (pre breaks) but I generally do not have wrist problems at all when kayaking or canoeing. I do use Greenland paddles 99% of the time, which I am sure is a factor in letting me paddle for hours without twinges. Other parts of my carcass may complain (I am 71) but not the wrists.

Might also mention that I broke my left elbow (bike cras) requiring surgery and a 6” long steel screw in my 20’s and fractured my left proximal humerus (shoulder) when I was 62 (fell mountain hiking) and all thise joints healed fine and give me little trouble so far with anything but longer bike rides. If I was more into biking I would opt for a recumbent but so far paddling and hiking keep me satisfied enough with outdoor ventures.