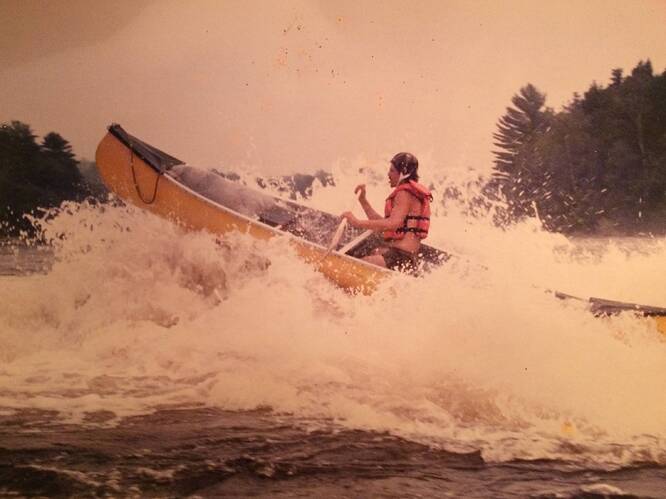 Peter Mallory running the class IV Nesowadnehunk Falls, West Branch Penobscot River , Maine , Summer 1983.
16 foot Perception Chatooga Canoe.
Note the approach to this drop is class 1-2 and the pool below a class III. So it’s not as hard as it looks! Made it without capsizing.
Photo by Jim Pippin

The Peception Chattooga and the Perception Nantahala (identical except for wood gunwales) were among the “Warsaw Rocket” hulls, all produced by Uniroyal at Warsaw, Indiana. The bare hulls were sold in lots of 20 to a variety of makers, who then finished them with their own gunwales, thwarts, and seats, and applied their own badges. They were all 16 footers. In addition to Perception, Uniroyal sold Warsaw Rocket hulls to Mad River, Blue Hole, Seda, and Shenandoah. These were the very first Royalex canoes and appeared in the very late 1960s or very early 1970s…

The original Blue Holes were Warsaw Rockets finished in Nashville, TN. Later, when Blue Hole moved to Sunbright, TN they designed their own molds.

Until dedicated, solo, Royalex whitewater canoes like the Perception HD-1, Mad River ME, Whitesell Piranha, and the Blue Hole Sunburst were introduced to the market in the early 1980s, solo whitewater open boaters mostly paddled Royalex tandems like this one, or 15’ aluminum canoes with shoe keels and extra ribs.