I have been told width is 31"; that is close in my opinion.

Layup is royalex, no doubt.

Any information would be appreciated.

HD-1
I may be able to answer your questions after I do some research when I get home. I had one back in 79 or so. It was the only glass one I ever saw. The story was it belonged to Bill Masters who was the owner of Perception at the time. I had the HD1 and a John Berry ME at the time and favored the HD1. Sorry I parted with it a few years ago.

I heard a couple of different things
about the HD-1, when it came out in the 70s. First was that they took a Hahn c-1, perhaps the earlier, wider version, and built up sides to make a form. I started out in a Hahn c-1, but I didn’t see enough HD-1s back then to form an opinion.

The second rumor was that the HD-1 was loosely based on the John Berry Flashback. I can’t say about that either.

The HD-1 was not a wildly popular boat, and I saw less of them back then than Outrages today.

I asked on cboats.net and the link
inside provides some info:

Be sure to select and paste the whole address if it does not pick up properly on this page.

This entire discussion on cboats.net

is very much worth reading. John Sweet confirms that he made an open boat by building up from a Hahn c-1 bottom, and raced it successfully, but it appears that Perception did NOT just copy what he did in making the HD-1.

Again, you won't be able to just click on the link. Select the entire link and paste it in an address line.

Those posts were very interesting, and full of history about hull designs, and paddling whitewater in a solo canoe.
Everyone who ever paddles a whitewater solo canoe, or even thinks about it should read those threads.

Thanks for bringing those to my attention.

It appears that Perception used a Paul Hahn design for the Perception HD-1, and in fact, the HD-1 stands for Hahn Design #1. But somewhere in there John Sweet got involved; using the bottom of a Hahn boat to make a similiar design.

... Canoe Magazine Buyer's Guide -- which I just happen to have on my bedroom floor next to my all-wood Mitchell Premier paddles, bibles, spy novels, other junk, and my newly designed Gillespie Free paddle -- Perception had two canoes that year: the HD-1 and the HD-1 Sola.

The former is said to feature aluminum thwarts and gunnels, while the latter "is outfitted in the beautiful white ash." Both models are said to be equipped with Perception Saddles.

Weight = "vary in weight from 43 to 56 pounds, depending on model and options."

My recollection is that this was the first commercial hull designed by Steve Scarborough, later of Dagger fame.

My further recollection is that this is the only canoe I have ever paddled that had no primary or secondary stability, but only tertiary stability = upside down, as its natural attitude.

84 Buyers Guide
Same as Glen posted. 78 Buyers guide lists 13’3" as the length and 30" as the width and it was only offered in vinylester,glass,synthetic at 48lbs. It had disappeared by the 87 buyers guide. It was the first “White Water Solo” boat I owned so despite it’s quirks I liked it.

Something might have drifted when
they made the mold. I had a Hahn of the 70cm variety, and it was decently stable. Later I got a Perception Sage, affectionately known as “Miss Piggy” by my c-1 paddling buddies, and its stability was more like what you describe. Manageable, though, if the seat was cut low enough.

You made my day!

"......had no primary or secondary stability, but only tertiary stability = upside down, as its natural attitude. ....."

I had one of the Rx models, in black. I knew it was a bit tender, and several friends got spit out of it. But I found it to be much fun, so I must have been much manlier back in the late 70s.

Of course, i spent one of the longest days of my life on teh Middle Yough, in summer at low water and with a stiff headwind. I was longing for a double paddle and a couple more quarts of water.

Mine is royalex, in a light blue color.

Jeebus, from the comments posted above, I’d assume this boat was built by John the Baptist. I guarantee that this boat is more stable than any other whitewater boat you ever owned with the possible exception of that Mohawk whitewater barge you acquired and quickly unloaded about a year ago. Take a look at that hull. It is SWEET – fast and tailed! Once you paddle it, you’ll be dumping your property in MO patch and finding Jesus on some sweet Class II AR billy creeks. That is the most unstable thing about it.

Frankly I am not much concerned about the stability issue.I would not have bought it if I was really concerned about my ability to keep it upright. I doubt it will be much more difficult than putting my 205 pounds into my 11'7" Blackhawk Shadow, with its max width of 25 inches, and center depth of 11 inches.

That being said, the temp. here this morning is 10 degrees, and the predicted high for the coming week is 25 degrees.
A fish count today sans drysuit would be nasty.
I'll test the canoe & my hubris on another day.

I am new to the site and just stumbled onto this discussion. Since this thread is so old, no one will likely read this, but I felt compelled to write about the HD 1 which I still have in my garage. I bought mine back in the 80’s and paddled it in open canoe slalom races, including the Open Canoe Nationals on the Yough, and down many rivers - including Section 4 of the Chattooga in South Carolina. It turns on a dime and can whip into an eddy like no other. Lean the wrong way, however, and you will quickly discover the tertiary stability referenced in another comment (-: ) I have never paddled a canoe before or since that could turn over as quickly – before you could even think of throwing a brace. I worked at an outdoor outfitters at the time and was able to go to the Perception factory where Bill Masters gave me, and my future husband, a tour. My boat was a special order and it was gorgeous - Black ABS with wood gunwales. The secret to keeping this boat upright is to sit very low and never take your paddle out of the water. I took quite a few swims before I realized it is a boat you wear – you become one with the boat rather than something separate. Unfortunately this is the exact reason I cannot paddle it now. My old knees have suffered from all the hyper-extending I did back then and they won’t bend like they used to. I guess I just haven’t parted with it because of all the great memories… BTW, I was told the HD stood for Hot Dog. I like that better.

Update:
My blue, Royalex HD-1 was sold several years ago. I was not using it enough to justify it’s storage space, and I had several other solo ww boats that I preferred to paddle (specifically a Mad River Outrage X, Mohawk Probe 12, and Mohawk Probe 12 II. Never put much effort in becoming proficient in the HD-1. It was a fun boat to paddle in the Summer, when getting wet wasn’t a big issue.

Then I saw an ad on Craiglist; a solo ww canoe for sale within 20 miles of my front door.
Seller didn’t know much about it, and said she had used it maybe 5 times total; never on whitewater. My interest level grew.
Boat was red in color: so I knew it would be fast

The next day I visited the seller. The boat was in the back of a garage that was loaded with other trash (some on top of the boat), and boat was absolutely filthy. Took more than a few minutes to uncover it & get it out of the garage.
Yep! another HD-1 !
Took it to a water hose; rinsed it, and wiped layers of dirt off with my hands.
Boat was nearly pristine; photo shows it’s condition the day I bought it. Price was very, very cheap.

It’s fun to play around with in the Summer time. Occasionally, I get wet. No big deal.
Being red, it IS faster than the blue one I had. 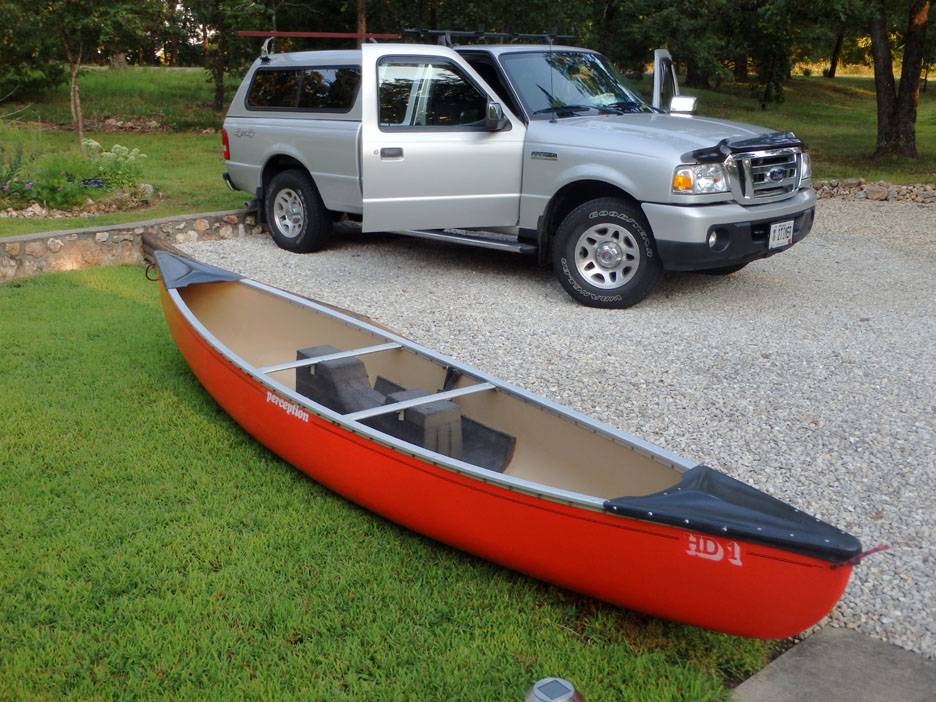 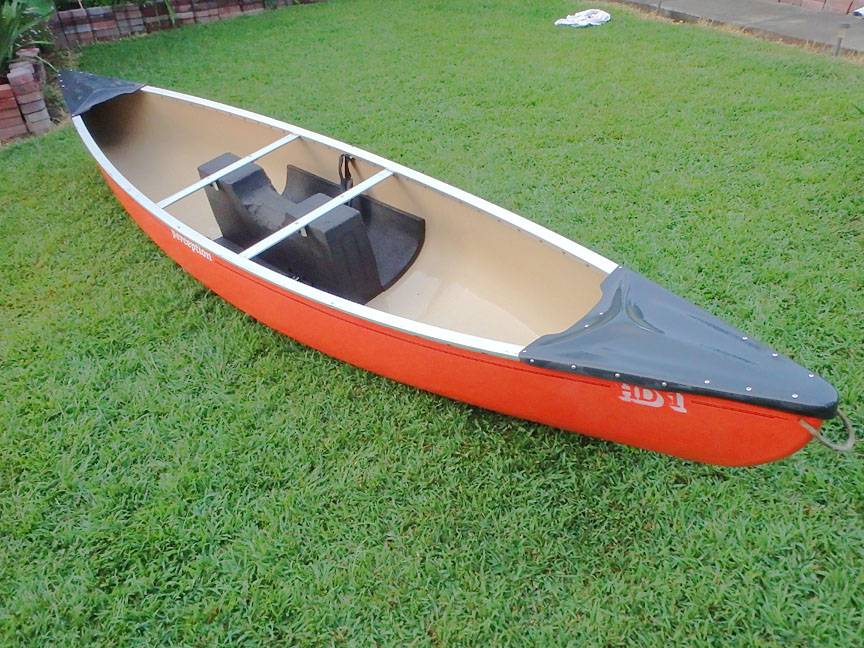 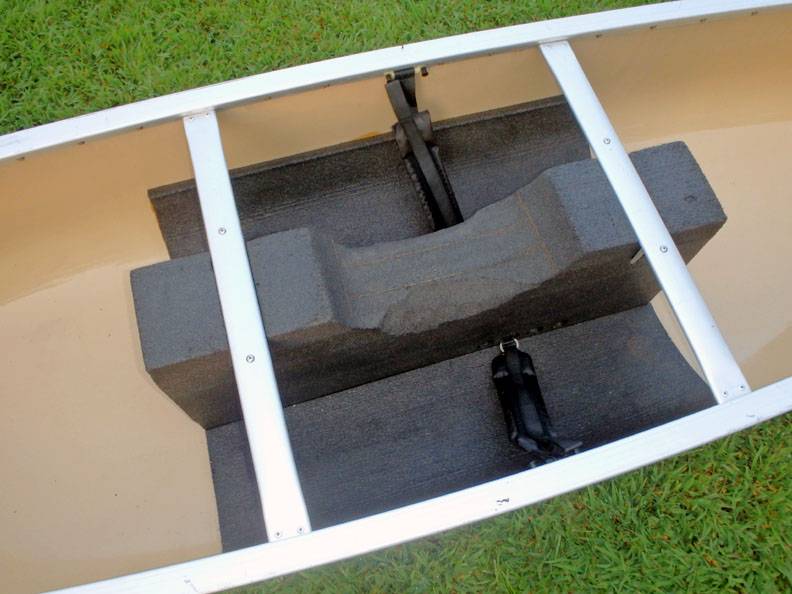 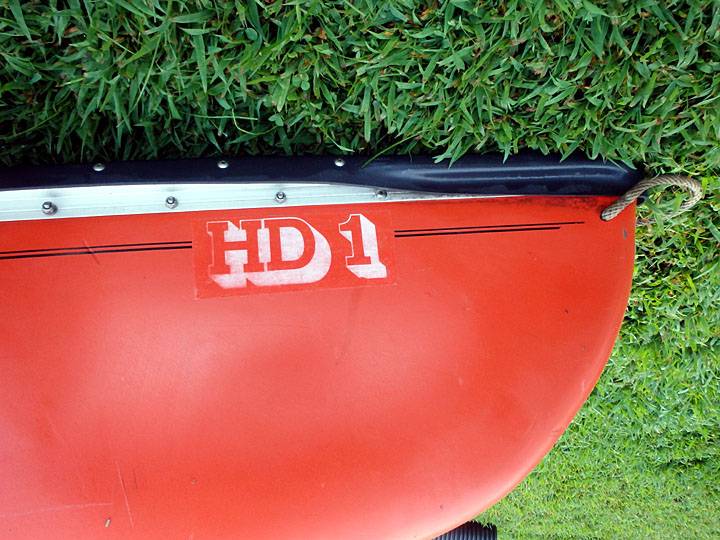 Check the pedestal height in that thing, Bob. It looks as if it has the same arrangement as the one I bought from you, and that thing had a height of like 14" or so, IIRC. A pedestal that high will make that red HD-1 very fast indeed. Fast to invert.

You are correct; the pedestal height is not going to work for me.
Luckily, I have several other pedestals “in stock” that I am considering as a replacement.
Always nice to have a go to stash of outfitting accoutrements.

As stated in email to you; I do NOT consider temps hovering between 95 and 105 as ideal for canoe outfitting, or re- outfitting. I am not nearly as prone to “suffer needlessly” as I used to be. The canoe is in my clean & dry "loafers shed; it doesn’t need much to eat, and has a varied selection of companions. 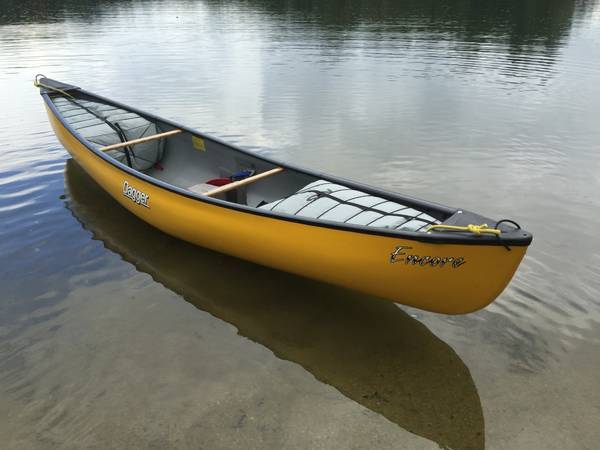 Two other solos(pictured) are also “in line”, awaiting refinements.
Doors on shed are locked, so they don’t run off. 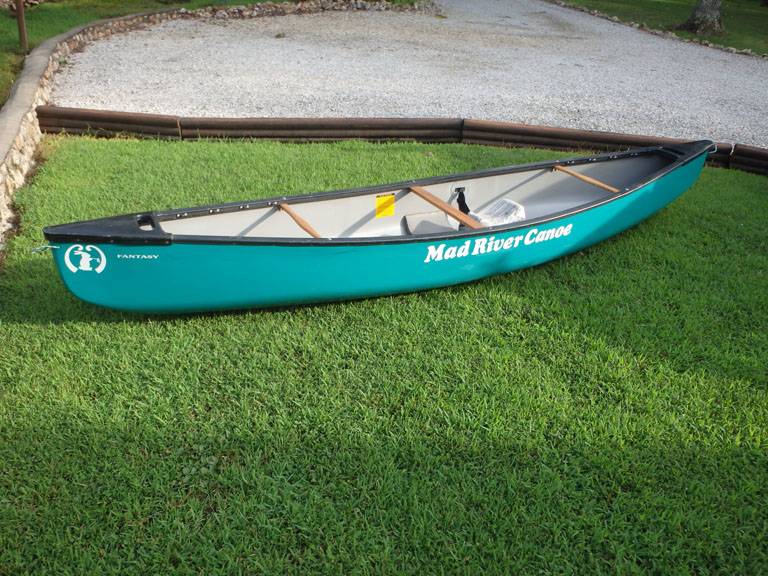 You could just cut it down. I think I cut a chunk about 4" thick out of the blue boat. The pedestal looks like it is 6" wide. Very popular back in the day, but not the most comfortable That can be addressed by gluing some minicel block to the sides of the pedestal at the back to widen it out to 9".