Last year i started kayaking and bought the NRS cVest. It is really comfortable. The 2 issues are related to my phone use. i have my phone tethered via a coil cord and carabiner to my vest. I listen to music and podcasts, and also look at the map occasionally. So I like it be accessible. I would love to put the phone in a water-tight bag and inside the zipped bag while tethered (quadruple safety!)

The cVest only has a plastic ring OUTSIDE the pocket. So if I tether the phone, and put the phone in the pocket, the zipper has to stay open. In addition the pockets are too small for a phone in a water-tight case. My phone has a 1.5 m rating, but i still like to keep it dry.

In addition to the larger pocket and some means to attach the carabiner inside the pocket, the vest should be:

I’m trying to talk my wife into boating, so a second PFD is needed anyway.
So far I found:

What other options? Am I correct to assume for my need (phone with water-tight case) that I basically need a PFD with a large front pocket. That would exclude all front-zippered PFD. PFD with front zipper and many or large pockets seem to be fishing PFD. I really don’t need many pockets. All my other stuff is in a separate dry bag and doesn’t need to be accessed frequently.

I keep my phone in a waterproof case, teathered to my PFD, but then I just tuck it under the vest. It stays fine enough for paddling and it’s easy enough to pull out if I need it.

interesting idea. Don’t you 'feel" the phone then when moving around?
One downside I see is, the tether is all that holds the phone when it may slide out (like in the water?). I’m over-thinking this, but thought having it on the tether AND in zipped pocket would be best (a zipper can open inadvertently).

The tether, to me, is more when I hold the phone in my hand and it would slide out of my hand. Not to rely on for many hours of physical activity.

I do the same as NHTrucker. In my case I put the tether over my head and tuck the phone down the front of my PDF, easy-peasy. Don’t feel it, easy access (easier than opening a pocket, I reckon’)

OK, i think I’ll try that with my existing PFD. I’m still interested in buying one with better pocket option, though (since my wife hasn’t a PFD yet). and for the new one really like to try a larger pocket and tether option in case i don’t like your solution (I treat my phone like a life saving device, which it can be)

I don’t feel it at all. Even on a hot day I’m wearing a shirt, so it’s never against my skin directly. And like @mickp said, it’s quick access if needed. I tether mine to a strap on the PFD, it gives me a little more reach than if I put it around my neck, plus I know it won’t come off if I end up capsizing. But, if I’m in anything but calm water or gentle rolling waves, my phone goes in a drybag and gets stored, because I’ll be too busy to use it anyway. 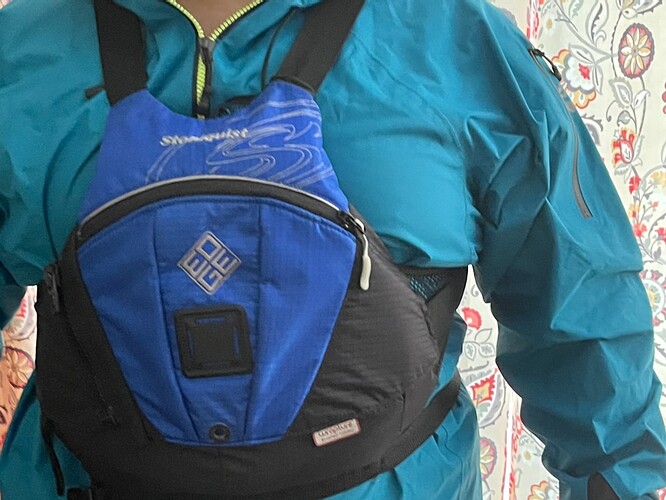 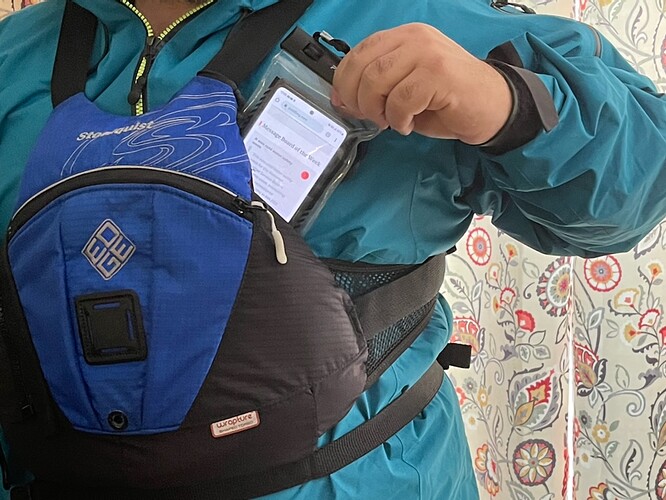 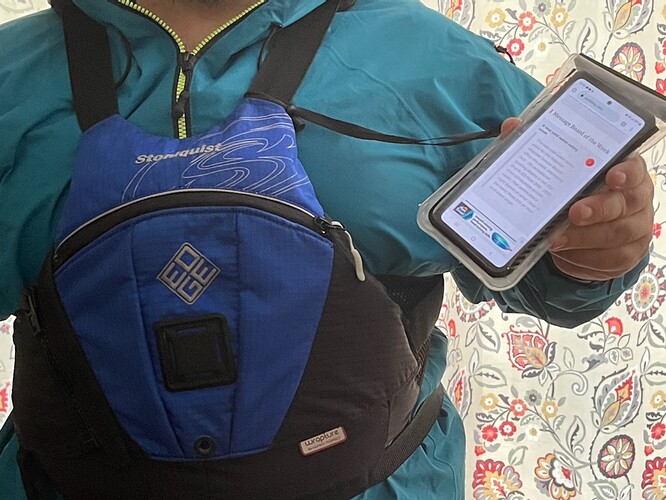 Nice photo demonstration!
Actually, I’ve started putting it into a dry bag/storage too. I mainly used it just to check progress/location, and here in TX with the bright sun, had real trouble reading it through the plastic. So, got myself a cheap Garmin Trex with a suction cup mount, which works great on a little flat spot on my Prana deck (I wonder if that was intentional). If I need to consult my phone for anything I can use it as an excuse to take a break.

I started by buying the phone case. I actually had to get a huge one since my phone has a protective case and most cases are designed to only hold a modern smartphone as tiny as it comes out of the factory.

I actually switched from IK to iSUP this year and will have my first ride in a week or 2. I also have a kayak seat and will sit when I do phone stuff. But with standing, now there is a higher chance to fall in. So I still have to learn how I actually use everything now with the iSUP. I go on several hour tours and explore unknown waters… so the GPS and picture taking is helpful and opening the drybag every time (and breaking that seal) isn’t practical.

I’ll try the “sticking behind the PFD” method and see how I like it. But for my wife’s (or my if she takes my old) PFD i still want one with the option to put the huge phone case in the pocket. Belts and suspenders and so. Opening the zipper isn’t a big deal (less of a deal than losing my phone)

I used to use a waterproof bag too that was supposed to allow you to use the touch screen but it was too touch proof with my wet fingers. Galaxies are now waterproof so I don’t bother anymore, just tuck the phone in my PFD. I’ve not intentionally tested the IP rating but in three unintentional tests it held up just fine.

Mine has a 1.5m rating and with a PFD I doubt I go deeper. But water goes between the protective case and the phone and then I need to take the case apart and clean it. And if I ever replace the battery, I’m not sure I can re-install the gasket like a factory would. The battery kits come with a replacement gasket and tools (you need to heat with hair dryer etc.). so if you replace the battery, you may not have an IP rating anymore.

No matter what a rating says, I still want to separate water from phone with as many layers as possible. I also like to not lose it. So the IP-rated phone inside the waterproof case, inside the zippered pocket and on a tether still is the best. Yes, it is a bit overkill… but there will be a day where I’m happy I over-did it.

Get one of these and you won’t have to worry about losing your phone, because it floats. You still want to tether it though. Available in 15 different stylish colors. The CaliCase Waterproof pouch gives you the best protection for your Android or iPhone! 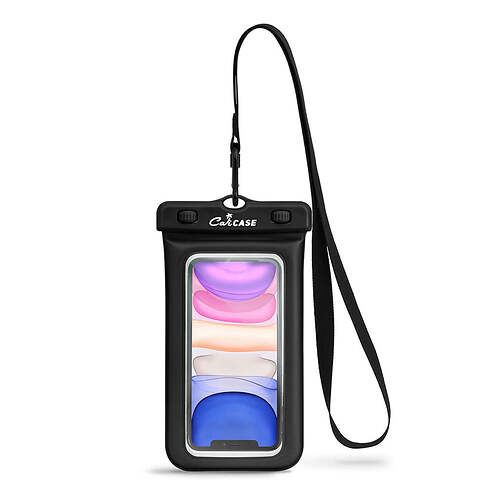 That (and most other) cases are too small for phones with a protective case.

IMHO all the new phones have a stupid design in that they are tiny but fragile. so you have to buy a protective case. then it is larger/bulkier. IMHO they should come out of the factory a bit larger but with proper protection included (assuming they will be used in the real world). but that isn’t something I can influence… but the water-proof case manufacturers don’t take the protective cases into account.

The ones I bought also float with the phone due to the entrapped air. However, if I’m in some kind of emergency, I don’t want to go on a phone search mission if I don’t have to.

It depends on the case. I have a small case on my Galaxy S20 and it fits in the regular size of these. Calicase also has an XL size for the larger smart phones. You could also take your protective case off your phone so it will fit in a waterproof floating case. FWIW, I stopped using Otterbox Defender cases because I was tired of my phones never fitting in pockets. Five years later using cheap rubber cases that basically frame the phone i still haven’t damaged one, and one of my phones took a 6 foot drop from my truck seat to the pavement. YMMV.

So far the Astral Sturgeon seems to check all the boxes. For some reason I think the orange could be more visible than the yellow (Kokotat Hustle) and my shirt already is yellow. So IMHO the orange vest could add safety over getting a yellow one.

The Sturgeon seems to be marketed for fishing. I suspect many PFD with large pocket will. I hope that doesn’t come with downsides for just paddling.

One review I saw that the guy uses a different PFD for WW kayaking. So I wonder if the Sturgeon will be as comfortable paddling as the NRS cVest I have? the cVest has the lower back with no foam (to accommodate for seat), the Sturgeon is more typical. I have no idea if the foam between my back and would bother me at all.

I found the NRS Ninja, but it seems to have a small pocket. Actually they are not really clear on the pocket. I like Astral provides good pictures. So there isn’t really something that makes me think the Ninja is better.

Be aware that Samsung specifically says they will not warranty water damage in spite of their claims of an IP rating. If the phone leaks they consider it abuse. There are many complaints online from people that are very upset over this issue.

Look here among other places for information from Samsung.

I took the Astral Sturgeon into the water yesterday. The large phone bag fits in with not much room to spare. I actually got a new phone that is a tiny bit larger than the S9+. So those tiny water-proof pouches really don’t work.

I actually put the phone into the water-proof pouch when standing (SUP-mode). When I was sitting in kayak mode (which was 95% of the time) and i took a picture, I had it on my old rubber tether since the chance to fall in was small.

So this works now much better and safer.