Photo from my bachelor party

Before I got married in 1997, me and my best friend packed up a car and started driving from Burlington, Vermont. We had no plan, other than drive until we ran out of road.

We washed up about eight hours later in Millinocket, Maine, looking at the lake. Parked at the dock there was a float plane. We walked into the office behind us and said, “drop us somewhere.” It was May and he wasn’t sure where ice was out yet, but he strapped a canoe to the the float, loaded us up and 45 minutes later we were in the air.

We touched down on Lobster Lake and spent the next four days paddling down the west branch of the Penobscott to Chesuncook. Everything about it was perfect.

My best friend, my soulmate for all my life, died last fall at 51 of cancer. Because of covid, I couldn’t say goodbye, but in going through his things his girlfriend found a picture of that trip. I didn’t know any existed.

That smile on my face says everything. Those four days were perfect in every way. It wasn’t what most people think of as a bachelor party but nothing could ever have been better. 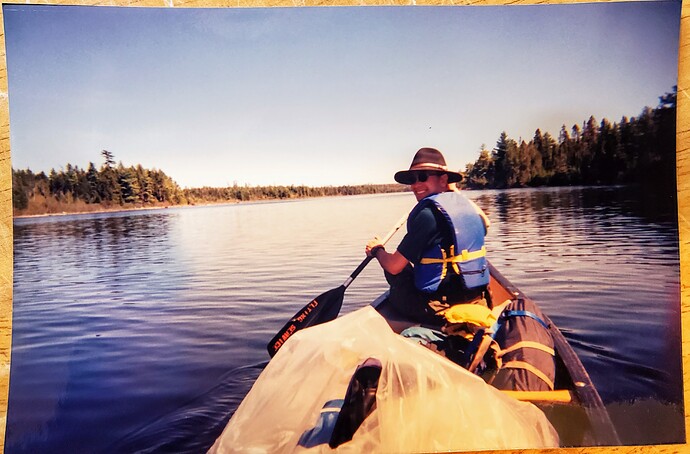 thanks for sharing that great story, amazing how a good photo can transport you back to a wonderful time, sounds like you beat the blackflies by going early

None! And we lived on the fish we caught.

Your bachelor party sounds amazing. I’m very sorry about your friend, and so glad you have this photo now.

It’s over in the blink of an eye.

I got married not long after, in 99. While sometimes it feels like a lifetime ago, it also seems just like yesterday.

I recently lost my high school sweetheart. We hadn’t seen each other in years but gosh we were together long enough that our lives courses were permanently altered by each other. So it’s like a small section of my rudder broke off with her passing. So strange, this life thing

Great Bachelor Party! Sounds like even a Greater Friend. So sorry for your loss.

I lost a very close friend myself end of February 2020 just before the Covid shut down. Was able to make it to his funeral in FL. We shared a lot over the years. I still think I need to call him when something important happens, and then remember that is no longer possible. I know the photo must mean a lot. Darkstar is right about altering our life, and a missing piece of rudder. Well said.