The U.S. Coast Guard says they rescued a woman who got lost on the Sturgeon River and had been missing since Sunday. Air Station Traverse City says they started searching for the woman Monday morning near Big Bay De Noc. They say she called for help...

I think they are being a little dramatic saying the pink kayak probably saved her life. By my math, she was missing a total of one day, and it looks from the photo that her kayak is sitting on a paved road. I’m glad they found her though.

Yes, a bit melodramatic but I brought up the Sturgeon River on maps and it runs through a pretty remote area. Looks like a great place to paddle.

The USCG stated the pink color made it easier for them to locate her:

Good afternoon from Air Station Traverse City! This morning at approximately 5:30 AM our crew was launched to assist the local sheriff’s department near Big Bay De Noc in searching for a woman who had been missing since yesterday. The woman was in a kayak and had gotten lost. She had called local authorities, but shortly afterwards her cell phone battery died. Our air crew arrived on scene and began searching the Sturgeon River. We found the individual’s pink kayak and vectored the ground party to her location. They had been searching through the night.

This case is a great illustration that any time you go out on the water, you should always prepare for the worst case scenario, in this case remaining overnight exposed to the elements and passing thunderstorms. This individual’s bright pink kayak made locating her much easier for our aircrew. Reflective material and bright colors can literally save your life!*

That USCG statement was much better than the original local news article I read. I definitely believe in the power of bright colors for safety. I have worked many years in an incredibly remote location on the Alaska Peninsula (not the Kenai Peninsula, but out towards the Aleutians). I was guiding a recently retired special forces military vet and we decided to take a day and go hiking. I showed up wearing a red vest, and he of course was all drab colors. He took one look at me and said “I can’t believe you’re wearing that. I don’t think I could if I had to. I spent 20+ years trying not to be seen to stay alive. Red would get you dead.” I replied “Considering that the closest road is several hundred miles away and if something happens to us our only hope of being found is from the air, like it or not, my red vest might very well save your life.” He just shook his head and said it’s going to take a while to adjust to civilian life!

Might be a different sturgeon River. There are (at least) two in the UP. I’m going to guess that she was on the one that flows into Big Bay De Noc at Nahma. Dennis & Dates “Canoeing Michigan rivers” lists that one and not the much longer one in the Western UP that has some serious wilderness whitewater (up to class V). I checked AW and there is a third Sturgeon that is a tributary of the Menominee.

I bought a new-to-me used canoe a few days ago. I suppose I could paint it pink but I think I’d rather risk my life. 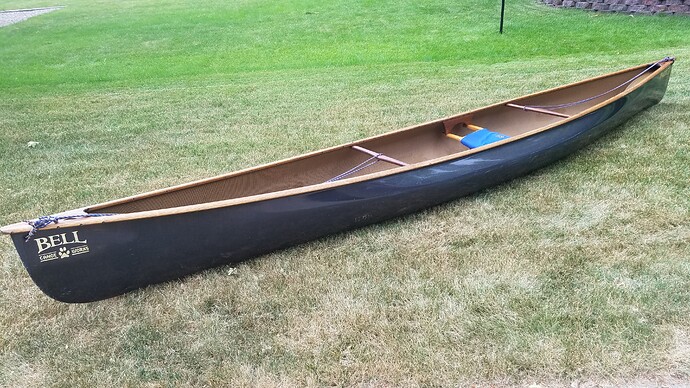 Well, maybe, put “OTHER SIDE UP” in reflective letters on the bottom

For whom the Bell tolls,
whenst dressed in pink,
is less the Magical question
if you’re beSOTted to SINK.

How does one get “lost” on a river?

I understand not knowing exactly where you are relative to your surroundings, but … it’s a river.

I’ve been on multi-day trips on similar meandering muddy-banked rivers before. And yes, the scenery all starts to look the same and it feels like it takes forever to get anywhere on the slow sections.

The river in question, based on the satellite view (thanks to the convenient coordinates in the photo), runs along the road the woman was “found” on for it’s entire length from Hwy 2 to Nahma. There are undoubtedly many places where the brush and/or banks prevent easy road access, but chances are good that if you’re determined to get there it’s doable.

Distance downstream as the crow we’re all jealous of flies, is about 4 mi. Roughly double that for all the twists and turns and add in some current here and there and both Nahma and the open water of Big Bay De Noc are only a few hours away.

Actual river distance paddling upstream to Hwy 2 (if feasible in this location) is less than 2 miles. Even with moderate current and a short fat boat I could still cover that in very reasonable time.

Walking distance travelling north on the road is 1 mile to Hwy 2, and to at least one large farm (or maybe some other sort of business). Plenty of places where assistance was likely to have been readily given.

"Your tax dollars at work" 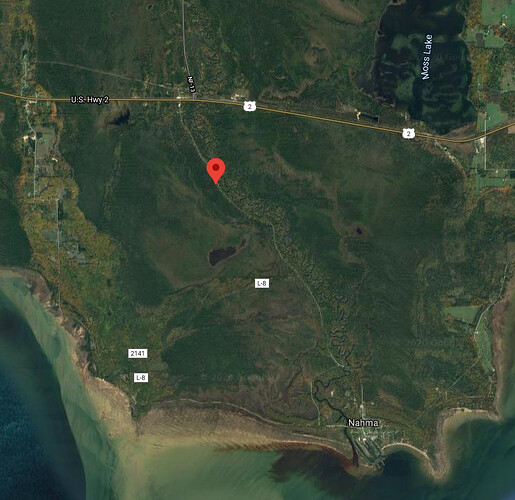 I have long believed bright colors are more functional unless you are stealth camping. I’ve hunted for my pack after I’ve set down next to a rock. Unfortunately there were a lot of rocks and what I thought would be obvious was not. I’ve also had trouble relocating my green pitched tent in the middle of the woods. The black Werner carbon fiber paddles are especially adept at hiding on the bottom of river beds. I saw one of those get lost this weekend, and another paddle (although fiberglass with bright blades) as well. Hard weekend for paddles and faces- several stitches required on lip and forehead of a good friend. Generally I like rocks but they weren’t so friendly this week. I was out 5 days in row in wv: paint creek, camp creek, cherry, down elk, backfork of the elk. So many pretty places and so little time…

I always thought that bright Yellow was the go to color.

Pink fades too fast in the Florida sun, not to mention that the boats I paddle would look ridiculous in pink.

I have 2 categories of gear - Blaze orange, and Camo. Anytime im on the water, im in full blaze orange with reflective orange and white film all over my boat. On the water, I want to be seen.

On land I usually opt for camo or olive green. Here in CA I do not want jackoffs finding my watering holes so I go full stealth, but I do carry a blaze orange reflective striped lightweight safety vest in all my packs should I find myself in trouble.
Another use of camo is hiking the mountain ridges here. Any of them within 30 minutes of town are “private property” either owned by ranches or various government entities. I ignore the barbed wire and hike wherever, leaving no trace of course, but camo is definitely necessary.

So I say both are good, and you should always have Hi-Viz gear available because you never know when S will hit the fan. I agree neon pink is probably the most visible color, but I cant bring myself to rock blaze pink. Orange is good enough.