Pity the northerners, Salt and Ice

I drove through winter storm Helena the other night. I was headed north on I-95 and caught up to Helena in Florence, SC. It didn’t change to snow until Rocky Gap, and then it was dicey for an hour or two before I started to come out the north side of the storm. I was ecstatic to run onto dry pavement in Fredericksburg, Va. I got home a couple hours before the storm was supposed to hit. I emptied out my gear and left the boat on the truck. And there it sat.

The webbing straps had been thoroughly soaked by rain, then pelted with road slush for hours, then driven into the hard freeze. The whole area where the straps looped around the bar and up onto the cam lock was encrusted in a thick layer of ice. My front license plate was obscured to the point where I couldn’t tell I had a front license plate. Under the layer of ice was the knot for my bow painter. I could see the lump in the ice where the knot was and I guess I could have yanked at it, but I gave up.

After two days of letting the vehicle sit in the sun, I got the boat off. So nasty. Unbelievable the amount of salt encrusting the inside of the hull, the seat, thwarts, everything. I’ve had the boat on salt water trips, but never had a thicker layer of salt crud all over the boat. I rinse/broomed it out before I put it up. And the straps–I had to wash those out, too.

I’m feeling sorry for my northern paddling sisters and brothers. You have to put up with this crud all the time. And it is probably too cold to wash your boat out. I’m having a pity party for you!

If we need sympathy we would look in the dictionary between s#!t and syphillis

Snow is money in the bank for us’n who frequent whitewater. Salt is great on a Margarita afterwards. It’s being able to get TO and find open water that worries me 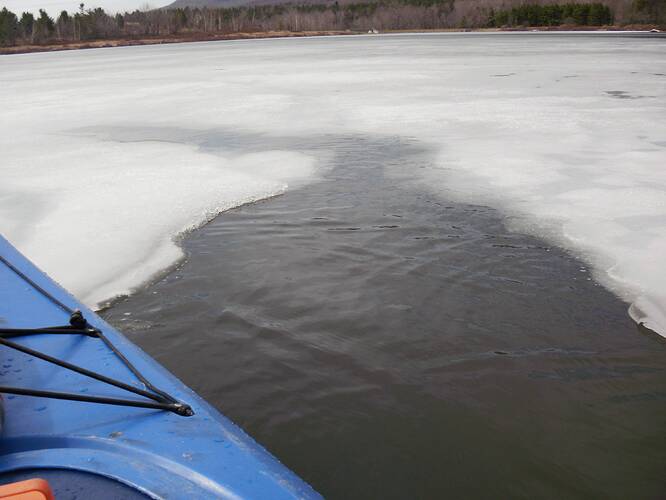 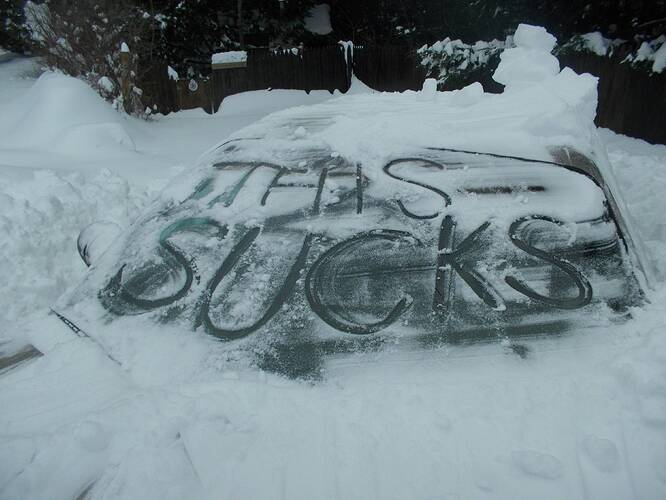 Pity the northerners
(in salt to ice)?
Let’s make margaritas!
(some spirited advice)
Or bark at the ice
till water falls down.
We salt of the earth
must paddle around.

Its too cold here for salt to work usually… Everyone does have a mud colored car. Sand and plowing.
I am not paddling at minus 5 F…
Snowmobilers have been able to find open water this season… Its disguised under snow on deep lakes… The same rules apply to snowmobiling in cold water as kayaking in cold water.

Winter in fresh water country can be harsh but also magical.

We quit going to Arizona for the winter because the promise of global warming had us encouraged that there was no longer the need to head south for the winter. Looking out the window this morning, I’d like to have my hands around the throat of those so called experts who tell us the world is about to fry. There’s about 6 inches of white hot something all over everything and we are probably going to have to cancel our reservations at the resort we were supposed to drive up to today.

Don’t confuse weather and climate. The oceans don’t lie… The Gulf of Maine is warming at an alarming rate and the lobsters cant survive in warm water.
We have invasive warm water crabs moving in.
You can’t measure year by year… but decade by decade you can. six inches…bah nothing.

Shoveling snow is a sport. So is ice breaking…in your own driveway.

I don’t need anyone’s pity; I choose to live here. I’d much rather deal with snow in the winter than with the miserable summer heat in the south.

Yup. Its way too warm today… there is a layer of water on top of the ice on the lake… The real sufferers are those around the Mid Atlantic…90 degrees in the summer and ice and glop in the winter. We get to 85 maybe once a summer.
Awesome hike at 10 degrees yesterday in New Hampshire

Hey Kim, I think one person here has demonstrated more than enough times that he will desperately cling to the idea that none of the really big evidence of a warming planet can mean anything as long as there’s ever a little bit of colder-than-average weather in their own little corner of the world. What’s happening in the Arctic and Antarctic means nothing to a person who simply makes up their mind that the Earth can’t be getting warmer at all if they don’t see it where they live. And as long as boneheads like Rush Limbaugh continue to spew “obvious” (but bogus) conclusions to their disciples that are based on the simplistic notion that our atmosphere and ocean waters don’t move, there will be people who flat-out refuse to believe that the situation might actually be too complex to describe in a couple of outlandish sentences.

All that global stuff aside, in my neck of the woods, we rarely have winters as cold as we used to have, and it’s not just my perception of things. We’ve recently even had a few winters where our largest local lake didn’t entirely freeze, and in all of known history it has been normal to have a couple feet of ice out there by mid winter. Not anymore. And what would amaze those who minimize this stuff is that the average winter temperature has not gone up by much at all, but the end result has been huge (like lakes not freezing all the way).

Well Chip, this is why my boats (sometimes with the exception of one of them, which sometimes sees a tiny local creek that’s not frozen unless it’s way too cold for paddling anyway) are covered with a layer of dust once the ice goes out. There’s no reason to take boats anywhere during winter. Personally, I usually find myself hoping for more snow than we have, because I enjoy snowshoe hiking just as much as paddling. If I do any weekend trips this winter, it will probably be north to go snow shoeing, not south to go boating. As to salt-encrusted vehicles, I’ve never known anything different so it seems okay to me. Learning to pry the car door open when it’s frozen shut instead of pulling on the door handle is something you get used to (the handles on modern cars aren’t strong enough if there’s frost on the door gasket - they’ll just break right off if you pull too hard).

Icicles on the boat last weekend - 52 degrees today. Don’t worry about us - we manage fine

Most of us here set our kayaks aside in the cold months. We then go skiing at the mountain overlooking the town. This is quite efficient allowing us to use the water twice.

@rsevenic said:
Most of us here set our kayaks aside in the cold months. We then go skiing at the mountain overlooking the town. This is quite efficient allowing us to use the water twice.

Why?? Take your kayak sledding!! We seriously used to do this in Rhode Island.

@rsevenic said:
Most of us here set our kayaks aside in the cold months.
But some of us find that a sit-on-top kayak makes a good ice fishing sled, and doubles as a personal flotation device when fishing on thin early season ice. 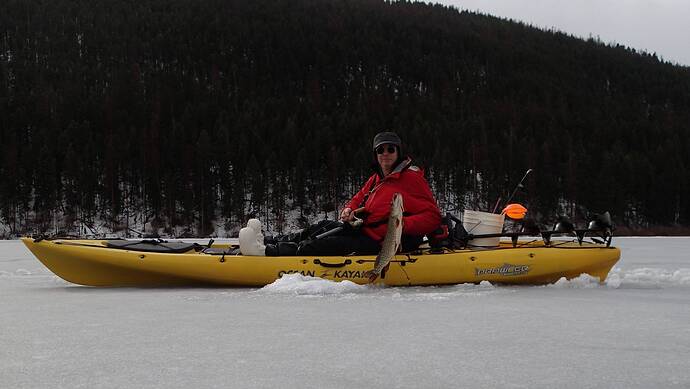 When I got home to Pittsburgh, PA, last Saturday after spending two weeks with family in snowy upstate NY, the windchill was minus 8 F here and the still air temp was 6 overnight. Today it’s raining, and warmer outdoors (currently 66 F) than in my house and every shred of snow and ice has been melted away.

Pittsburgh has always been goofy and unpredictable weather-wise, since we are on the border between the warm air systems that push north from the Gulf and the cold air masses that come down from the Canadian Shield and Great Lakes – it’s Jet Stream Roulette. We can have completely different weather simultaneously in the north and south reaches of the county or even at the two ends of our many tunnels. I’ve entered the Fort Pitt Tunnel in bright sunlight and exited at the other end in a raging storm. Having grown up in New England in the 50’s and 60’s (when winter always meant snow cover for months on end) and having spent 8 years in the lake-effect snow belt of western Michigan, it’s still hard for me to accept the bare ground grey dreariness of the snow-less winters that predominate here.

If it had not been raining so hard today I might have entertained a local kayak outing, though with all this abrupt snow melt the rivers are high, fast, cold and full of trash and strainers. Yesterday was an ice storm (my street is still covered with road salt) and tomorrow it is predicted to snow and sleet again. At least when we have decent snow cover we can XC ski – had some great days for that last winter but it was only a small window. Most winters since I moved back here in 2004 have been largely snow-less, though in 2010 we got slammed and the city was paralyzed for days by an awe-inspiring blizzard that left snowpack that thrilled us skinny skiers for weeks. Since I picked up a pristine pair of vintage Madshus Birkebeiner wooden touring skis while I was up in the Adirondacks region last week, I’m eager to try them out so I hope we do get some more snow eventually… Spending today swapping the bindings to SNS and torching pine tar onto the bases.

Thought of running the vehicle through the car wash (poor thing looks like Margarita glass rim) but there is little point since they will be dumping more salt on the roads tomorrow, especially in my mountainous district. 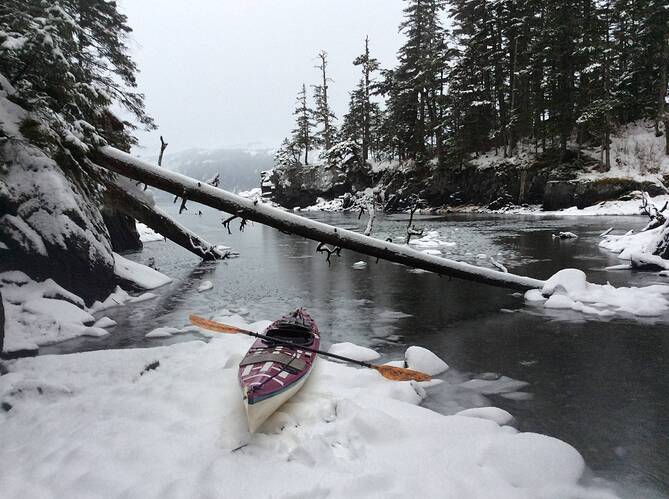