Plastic vs. Composite vs. Thermoform Kayaks

This topic is highlighted in the current issue of PaddleNews (Feb 6, 2019).
In terms of construction material the presenter neglected to mention the best kayak option: thermoformed kayaks.
We have been kayaking 14 years (I have canoed for 50+ years) and we have paddled polyethylene, composite and thermoformed kayaks.
This includes kayaking and kayak-camping on the Great Lakes and rivers and lakes in Canada and the US - Ontario and Florida in particular.
Thermoformed kayaks are as rigid as composite and more durable.
For kayaks of similar size and comprable quality the “honest weight” of a well made thermoformed kayak is about the same as a composite and generally costs considerably less.
After tripping in rental kayaks (composites) for two years we were ready to buy and over a long weekend at a very helpful and patient outfitter we test paddled about a dozen different quality kayaks chosen for our intended use with the expectation of buying composite.
Towards the end of the weekend we paddled Delta thermoformed kayaks and after 15 minutes (or less) we were sold.
We paddle the Delta 16 (which Delta classifies as Performance Touring). These boats are stable, fast and handle very well.
Delta Kayaks of B.C. Canada makes excellent thermoformed kayaks to suit a variety of skill levels and needs.

Disclaimer: I have no affiliation with Delta Kayaks other than owning several of their models.

@kordate said:
Thermoformed kayaks are as rigid as composite and more durable.

Thermoform boats aren’t bad, and Deltas are a pretty good representation of the class. By your location and description I’m going to go out on a limb and guess that you purchased your boat(s) from White Squall. They have been selling hundreds of Deltas in the past few years.

For most people though, these boats are more than suitable. They are refreshingly light weight and I was reasonably happy with how the Delta 17 I paddled for a short while performed.

However, I must disagree with the quoted assertion above under certain circumstances. Especially in the cold, thermoform (ABS plastic) boats are very brittle. Drop the boat or bang it on something sharp and you’re left with an expensive pile of useless plastic. PE and composite will hold up much better here.

For those that didn’t see the video which the OP is referencing, it is at https://paddling.com/learn/plastic-vs-composite-kayaks/

I took some issue on the video talking about how you need rubber rand skirts for plastic kayaks. I have been using standard bungee rand skirts on my plastic kayaks since I started paddling and have no sealing issues.

Thermoformed kayaks have their place, but I definitely would not characterize them as “the best kayak option”.

Up here where we have lots of rocks shellfish and barnacles only the liveries use plastic
I have holed two plastic kayaks way back when within four years
In 1993 we switched to composite
Voila.
kayaks are 26 years old and do not leak
Composites are repairable
Scrape enough plastic off and there is no good way to fix

As to skirts (Peter-Ca) I would say in general, that skirts on platic kayaks have less ability to stay on vrs. composite. To help skirts stay on plastic kayaks introducing rubber helps or going to a rand is better. Everyones expierences are different, but if you paddle in challenging conditions and you don’t what your skirt to emplode I would go with a rand on plastic boats.

What kayamedic said… Composites are repairable.

I was surprised at how easy it was when I repaired mine.

I know a whole group of White water paddlers and some have rand skirts but many don’t and have no problem with implosion. I just got a new Immersion Research Klingon Bungee Spray Skirt. It fits real tight on my plastic Valley Avocet. I can JUST get it on. That skirt wont impload. I have been hit by 7 foot plus waves.

Thermo form kayaks I don’t trust any more after seeing two split open on paddles. both were Edyline. The ones I saw both had this ridge along the bottom center. When they popped up on a rock they split open. This was two separate times but same circumstances. But I also paddle with a few thermo formed ones in rocky conditions and they haven’t had a problem. BUT for rocky creeks roto mold is the way to go. Open water like the Great Lakes were I paddle mostly thermo formed is fine. I don’t like any of the designs of thermo formed so I wouldn’t by one for that reason. Wouldn’t rule it out if they had one a liked. BUT would never take it down a rocky creek. BUT I don’t do that either for my composite boats either. I would treat thermo formed the same as composite kayak. If you do that you will be fine. BUT don’t think its as tough as roto mold. It ISN’T.

In response to the comments above: 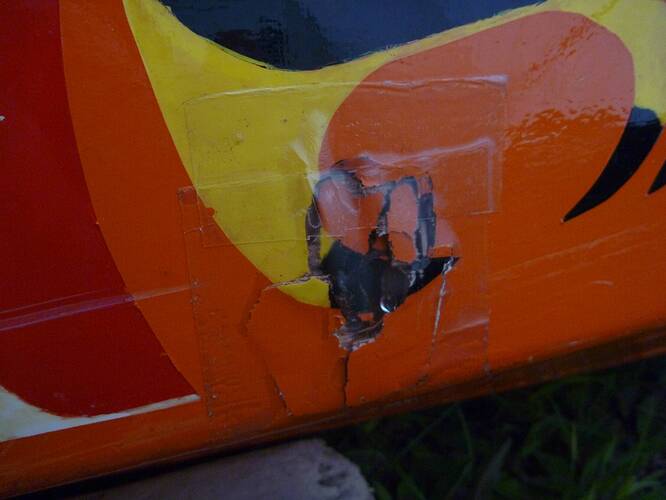 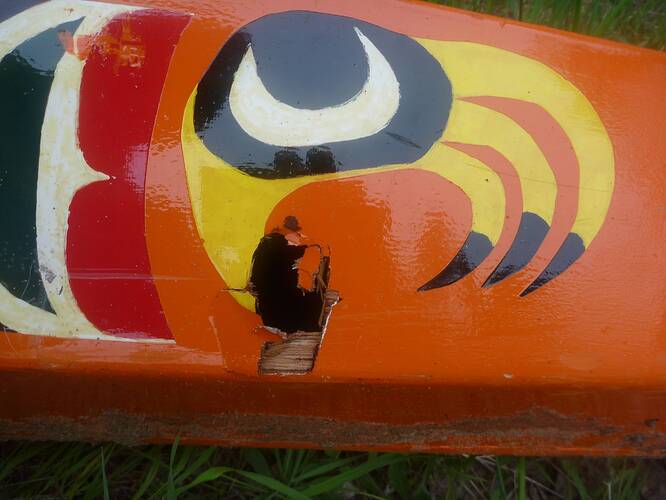 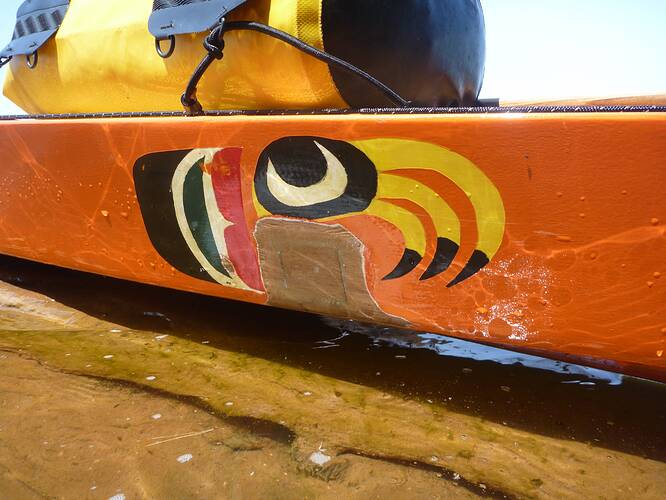 Composite repair. S&G. I was surprised the little effort it took mother nature to punch that hole.

60 year canoe paddler, and 40 year kayaker here -
We have composite, plastic, and roylex
I’ll take composite any day as my number 1 pick, unless I am paddling rocky white water in which case I’ll take the roylex, or plastic.
Composite is by far the easiest to repair and lightest, but I wouldn’t recommend it for a complete newbie who has never paddled before.
As long as you are on the water they are all good!

I am pretty bad at repair because I never bother to finish the job beautifully. Once it works structurally I am done. So the composite Romany has a decent bit of Captain Jack’s spider crack stuff in one area, the inch and a half gel coat repair I did on the Explorer keel line has never been finish sanded, and the bit of gel coat I did on the deck of the Vela is deck is pinker than the red because I got tired of trying to match the color. And I think there is a 7 year old bit of tenacious tape somewhere in there too.

But all of these fixes work, they took almost zero skill or tools and little time. These dings were all incurred on hard objects and the boats land on rocky beaches in Maine every summer. Because there are not sand beaches in Maine except in what is sometimes referred to as norther New Hampshire.

The thermoform would be lighter and is a IMO a good choice for a lot of inland lakes where you can have decent control over your landing spot. For ex have good access to paddle boat launches where you can come in on a non-rocky surface if a storm is chasing you home.

I would not want anything but plastic, and thick at that, for class 2 or up WW.

The OPer spends a lot of time paddling inland lakes and on the ocean apparently an area with sand beaches. I am going to assume that the river camping is not in class 3 or up WW. So I can see the argument for thermoform, if nothing else for the sake of aging backs and also having to load and unload camping gear.

But for my own paddling, I prefer composite for simplicity of maintenance and durability. That sacrificial gel coat weighs some, but it does its job.

Ah yes … can be a bit of an “attractive nuisance”.

I’ve been in similar considerations but from my understanding rotomolded plastic is as durable and indestructible and inexpensive as it is heavy and flexible. So you strain more to carry it, and it takes a greater effort to move it at the same speed. Plastic kayaks are also much harder to fix in the event of catastrophic damage, which is what is needed to break them though they almost never need it.

Composite can be quite light, fiberglass/soric designs like Stellar are getting as light as wood/composites, down well into sub 40lb range for singles. They are very stiff, take way less effort to carry and paddle fast thanks to their light weight and stiffness. Unfortunately as weight goes down and stiffness goes up, so does cost, and durability goes DOWN. Composite is very fragile and doesn’t like rocks at all. You can improve durability somewhat with a straight fiberglass design which is significantly heavier but still reasonably stiff performance wise. You still can’t launch it or drag it on rocks though like you can plastic.

What I was told is that with thermoform is the stiffness and durability are in between composite and rotomolded. So is the weight and so is the cost. They won’t stand up to being dragged on rocks nearly as well as rotomold, but they aren’t as easy to carry as composite. I was attracted to the somewhat lighter weight of rotomold but to me what stood out from the various dealers I spoke to is that rotomolded is the most difficult and expensive of all the designs to fix and the damage might not be repairable to the point where it will handle like new or “close enough”. So if your kayak is fed a steady diet of rocks like we do constantly launching from a rocky beach it will still wear out in a short enough time that very expensive repairs will be necessary in short order and you’ll curse yourself for not getting rotomolded.

What I mean is that if you are turned off from the composites because you are needing the durability of plastic, you’re not going to be happy with thermoform as it’s nowhere near as resilient. If durability is not an issue then there’s no reason to go for the higher performance of composite which in the end will save you money in the long run as it’s far less expensive to repair and more likely to be fixed successfully should any major damage occur.

What I was told is that with thermoform is the stiffness and durability are in between composite and rotomolded. So is the weight and so is the cost. They won’t stand up to being dragged on rocks nearly as well as rotomold, but they aren’t as easy to carry as composite.

Why would a thermoform kayak not be as easy to carry as a composite?

Some composites can be very light…

@grayhawk said:
Some composites can be very light…

As are thermoforms. My thermorform is 47# and my composite is 48#. Thermoform boat is easier to carry because it’s a foot shorter than the 17-ft composite.

My carbon/kevlar Nordkapp was in the high 30’s and most good wood composites come in around 40.
But those do cost a bunch more than thermoforms.
The best Epic 18X is advertised @39 lbs.
Having had kayaks in all the materials CA139 is spot on.

What I was told is that with thermoform is the stiffness and durability are in between composite and rotomolded. So is the weight and so is the cost. They won’t stand up to being dragged on rocks nearly as well as rotomold, but they aren’t as easy to carry as composite.

Why would a thermoform kayak not be as easy to carry as a composite?

I am pretty sure CA139 is referring to weight. On average, thermoform is lighter than rotomolded, but heavier than composite.