I’ll put up some detail pictures tomorrow of the Mercury. I have a couple arriving tomorrow.

If you watch some youtube videos you will see quite a few where people take those modular kayaks on some fairly serious adventures.
As I recall I’ve seen some around the African coast and the Bass straights.
Not sure where all I’ve seen them but I’ve probably watched every sea going kayak adventure trip video on youtube and the modular kayaks are used in several of them because they pack up so nice for over seas travel.

Another option for your situation is folding kayaks (which are not as well known in the USA but are popular in Europe and Asia). There are several makers of these, probably the most currently accessible and affordable is Pakboat (I’ve owned 5 of their boats and 3 from another maker no longer in business).

Both Pakayak and Point 65 are well designed and function as well in the water as hardshells. But they are heavy and still bulky to store and transport. Both the 14’ Pakayak and the solo Point 65 Martini weigh a whopping 59 pounds.

A 12’ Pakboat Puffin Saco folding kayak weighs 24 pounds and fits in a sports duffel bag or a standard rolling suitcase. Even their 15’ Quest model only weighs 31 pounds (nearly half that of the plastic modulars). You can haul one in the back seat or trunk of even a compact sedan. Folding kayaks have been used for 100 years for everything from recreational boating to float plane hunting and fishing trips from Alaska to Patagonia to trans-Atlantic crossings and remote research expeditions. I’ve flown to Europe with one of mine packed in checked luggage with no excess baggage fees.

The folders are a bit less expensive than the modulars as well. They do take a little more time to assemble, but with practice it can be done in 20 minutes. You do need to add flotation bags inside the hull if you use Pakboats with the optional decks on them, though both the Puffin and Quest models can be used as an open or closed deck boat, another plus.

ANyway, another option to consider when you have limited storage space and transport options.

I have never owned a modular or an inflatable, but I have watched the videos and read users thoughts and opinions etc.

For someone that lives in a small space without storage area or has transportation issues with a hard boat these look like solutions.

My fear is when I watch the assembly video of the Pakboat that is a condensed 15 minute video by someone that has done it many times and is doing it in a workshop on a long flat bench that is waist high with good lighting and no wind and elements. I picture myself trying to do it on the uneven ground at the road side put ins we use and doing it kneeling and I’m afraid I would be shot before the boat hit the water. I then picture undoing it after a long day maybe in the dark and not losing any of the parts getting it in the bag and home and then the next day opening it up again and cleaning it and letting it dry and then repacking it again.

Then with the inflatable boats maybe time spent inflating might go a little quicker but that also seems time consuming. Again I’m not an expert and I have watched people blow them up and launch with us and once in the water they just don’t seem to track work as well as those with rec kayaks or my canoe. The fellow we were with a few weeks back had to stop and inflate and at first he thought it was the change cause by the water temp, but later saw he had a small leak and then required pumping every half hour. I don’t know if his was a high-end boat or not. They also require opening back up at home and cleaning and drying and repacking.

Like I said I have never owned ether and can only relate that even a hard boat is somewhat time consuming getting it loaded/unloaded twice each time we use it. I normally leave it on the car overnight and unload the next morning. Now for a longer trip where you build or blow up the boat and then travel and camp for a week that might make a difference. I sometimes am only going fishing for 2-3 hours or a short paddle. Or if I know I’m using it the next day or two I just leave it on the car as we have two cars.

I think both types can be good you just have to factor in how you will be using it and if it is worth it comparing finding a place to keep a hard boat.

I have a Pakayk Bluefin 14 which is the predecessor to the Bluefin 142. I paddle with a group of sea kayakers on the Detroit River who mostly paddle Valley Etains and Sironas, and am able to keep pace with them, although I admit I work harder than they do.

Packing up to and from the launch I’m usually as quick and sometimes faster than them.

I’ve taken it out on the Great Lakes and rivers which I’ve chronicled on my YouTube channel :https://youtu.be/IJZykYiz6MM

I’m very happy with the Bluefin 14.

I presume you’re thinking of the solo Mercury (14’) and not the tandem. 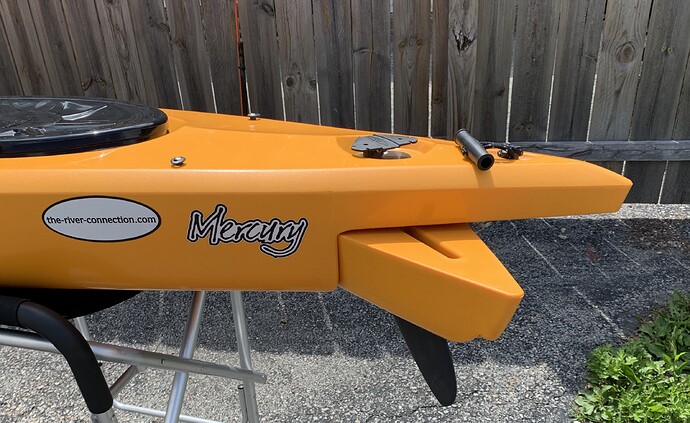 But they are heavy and still bulky to store and transport.

??? Actually the opposite. I saw someone put his Pakayak in the back seat of his sedan. I’d guess the heaviest piece weighs 25 lbs.

Seriously, with all the posts about lifting boats up on roofs you’d think these things would be more popular. They don’t cost much more than what you’d pay for a complete hullavator install.

I don’t believe I’ve seen a modular with a rudder before.
That one is like the one on my epic.
I like it for that modular system!

As you point out, one section of the modular weighs as much as most of my folders in total. Once assembled you still have a 60 pound 14’ boat to wrangle, which is 15 pounds heavier than my 15’ RM hardshell.

I’ve been using touring sized folders for 19 years. I usually set them up in the Spring. leave tgem that way and most often transport them on my roof rack for day trips. When I had vehicles (like minivans and older Volvo wagons, with wider rack spacing, I would even haul them on langer trips racked. I hauled my first one, a 14’ Feathercraft, thousands of highway miles on the rack the first few years I had it. You really can’t do that with an inflatable because they rely on high air pressure for structural rigidity and you can’t leave a too firmly inflated boat on dry land in the sun without risking bladder rupture from heat expansion. (speaking of leaking bladders, anyone who owns an inflatable or a folder with air sponsons should not be paddling it without a patch kit aboard. I have them for each of my boats and they include quick patches that can be adhered even underwater. The guy who inconvenienced his paddling partners with his deflating boat should have known better.)

Being able to easily swing a boat that is less than 30 pounds up onto the car roof Is one of the BIG advantages of them. So assembly and breakdown are not mandatory on each outing.

For trips where i fly the packed boat to the destination I have a Malone inflatable roof rack system that goes on the rental car. In England I rented a farm cottage so there was no security issue with leaving the kayak assembled and stored in the yard for the whole 2 weeks. I’ve also stashed an assembled folder in a motel room overnight.

No kayak is perfect in every way. But I find the combination of unique advantages of folders, their portability as well as the comfort, fit and feel in the water, has suited me very well.

And now that I am older (turning 71 tomorrow, in fact), these light boats continue to allow me to enjoy kayaking without having to risk injury and strain wrestling them. Yes, I could buy ultralight layup hardshells, but they would cost 2 to 3 time as much and would not be able to come with me overseas.