Point Roberts is an American exclave, surrounded on three sides by water and on the fourth side by the border with Canada. In normal times, the drive from Point Roberts to any other part of Washington State requires crossing the border twice: once into BC at Tsawwassen and thence back into Washington at Blaine.

In pandemic times, this route is not available due to the border closure. The people of Point Roberts are cut off!

Boats can still reach Point Roberts by crossing Boundary Bay. As further enticement for a visit, Point Roberts is home to the northernmost campground on the Cascadia Marine Trail, and also the most isolated: the Point Roberts Lighthouse Marine Park.

The people of Point Roberts hadn’t seen a tourist since April. I thought they might appreciate seeing a kayaker in November.

I launched from the public beach at the tip of Semiahoo Spit, the closest land access to Point Roberts. From Semiahoo, the distance to Point Roberts is a little over eleven miles (18 km), or fourteen miles (22 km) to the campground at Lighthouse Park.

To get an early start on Saturday, I drove up Friday night after work to camp at Birch Bay State Park, one of the most attractive car-campsites in Washington.

Birch Bay is home to a black color morph of the eastern gray squirrel. No doubt these individuals dispersed south from the famous black squirrel population of Stanley Park, introduced from the east coast in 1911. Black squirrels may be pests in BC, but they are still a novelty in Washington. Birch Bay is the southernmost extent of their range.

A dawn stroll through the park yielded only two squirrels, both ordinary gray color morphs, not black squirrels. Still, the walk was not wasted. The forest at Birch Bay is one of the most diverse in western Washington, both in terms of species composition and age class: a late-successional, second-growth forest, characterized by Douglas-fir, western hemlock, and grand fir, with abundant, mature red alder, big-leaf maple, and black cottonwood, and even a handful of old Sitka spruce. Leaves were falling like rain in the November wind, carpeting the road in the portions of the campground that were closed to cars for the season. 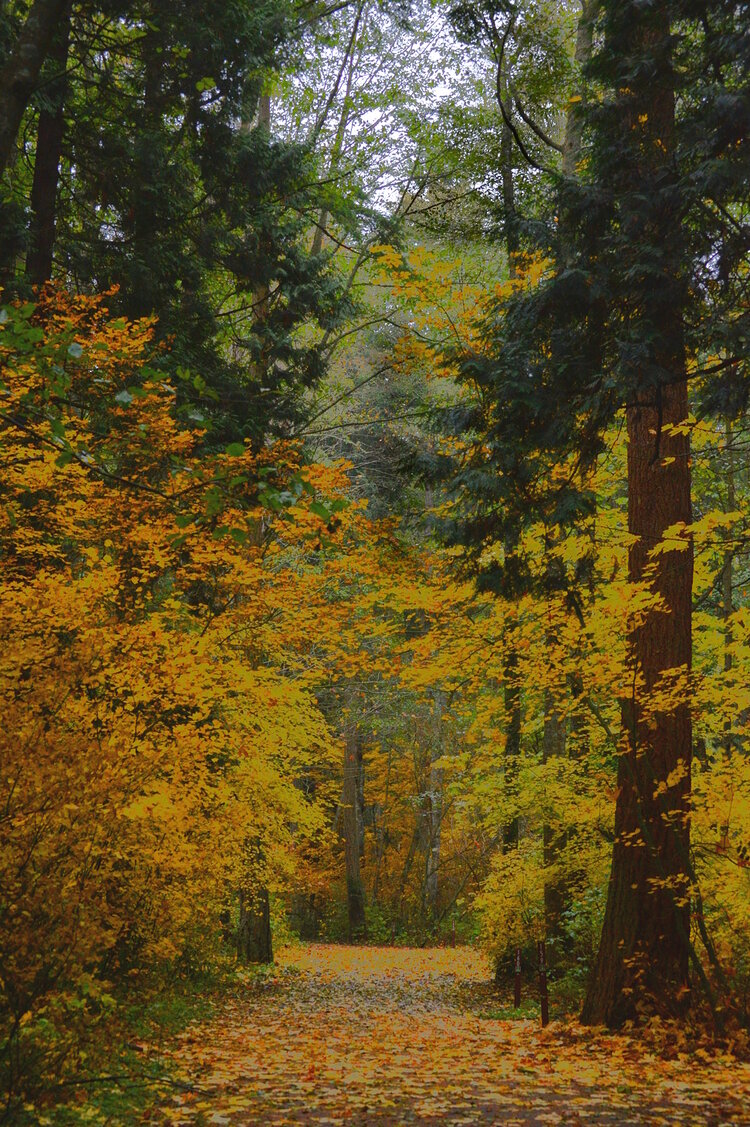 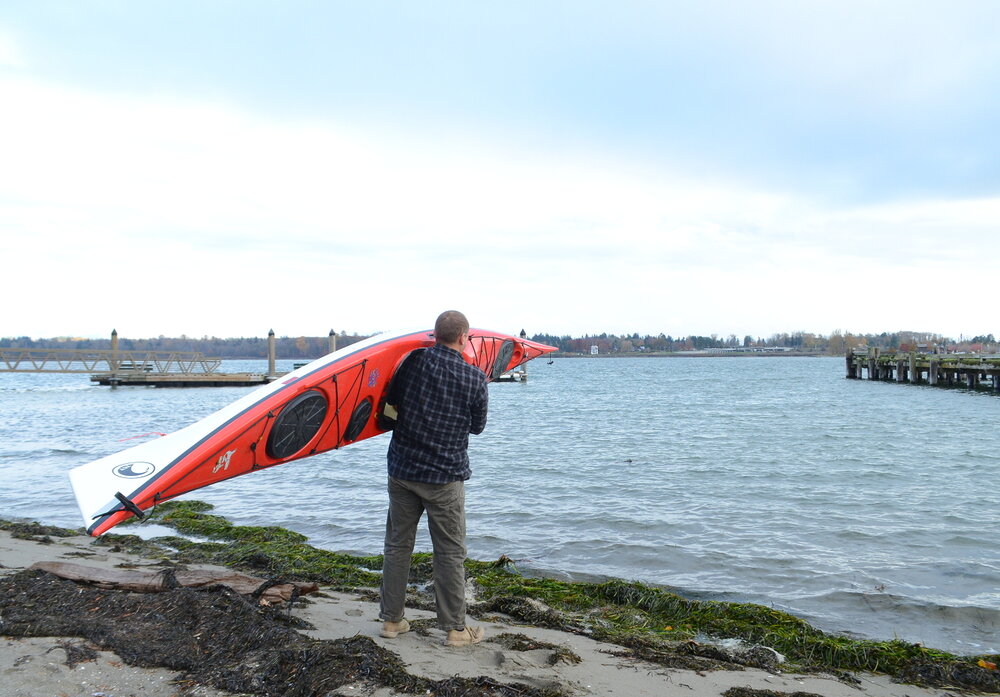 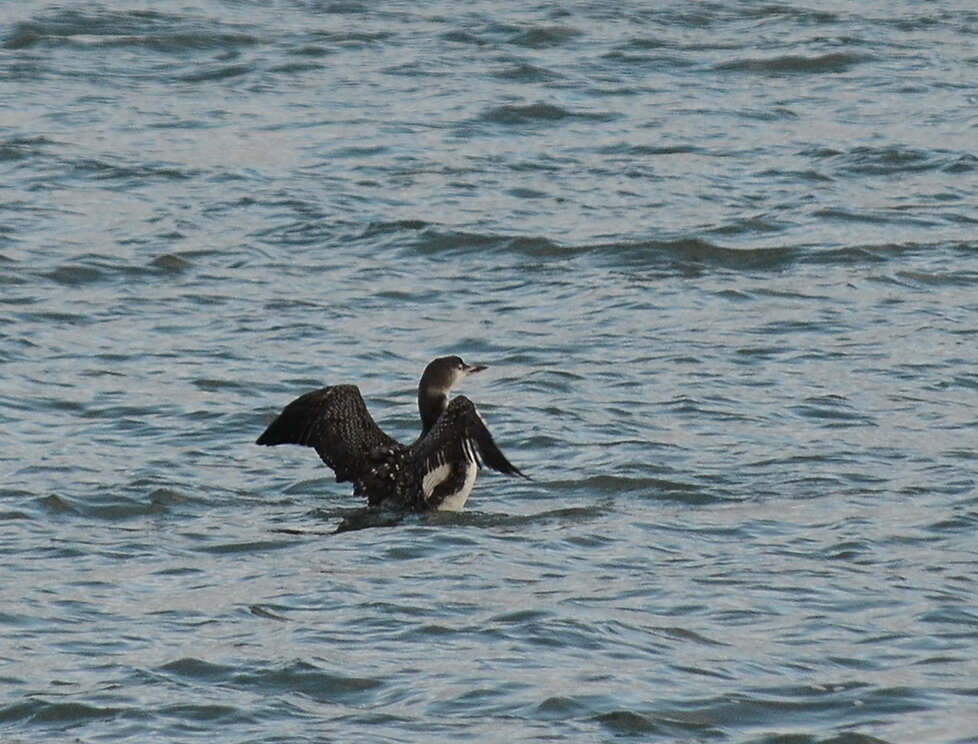 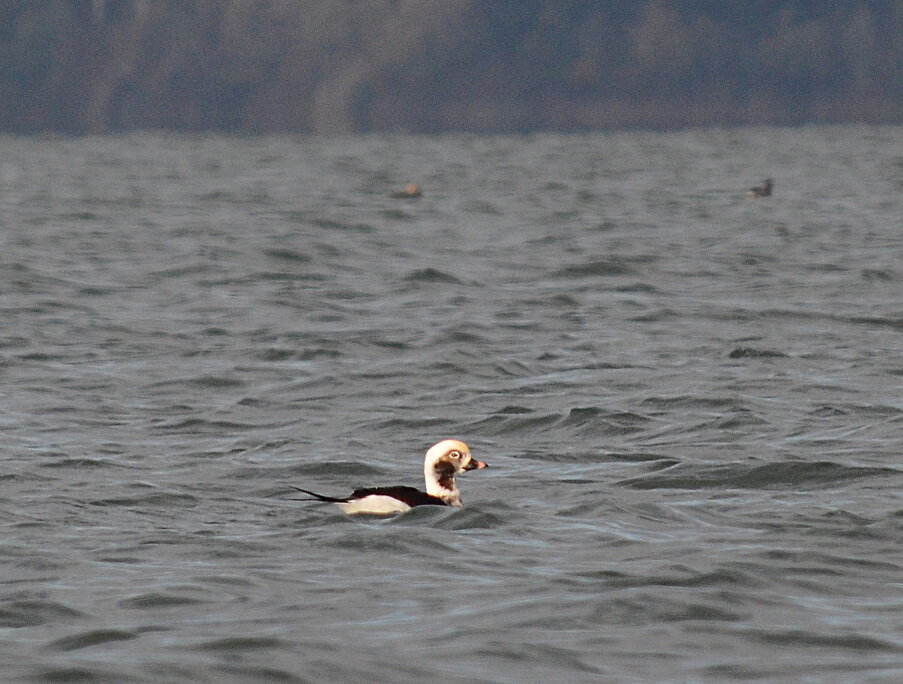 Crossing a large bay should not pose a navigational challenge, but I still managed to wander off-course when I mistook nearby Kwomais Point, BC for distant Point Roberts.

From the water, the peninsula connecting Point Roberts to the mainland was below the horizon, so Point Roberts looked like an island. I mistook it for one of the San Juans. Operating under the misapprehension that Point Roberts was an island, I figured Kwomais, an obvious peninsula, had to be Point Roberts.

I didn’t realize my mistake until a fishing boat that had been poking around the BC shoreline suddenly started dropping nets right next to me. “Well, either he’s on the wrong side of the border, or I am,” I thought.

A short distance ahead, a boundary beacon confirmed the truth. I had crossed the border and had been paddling ever deeper into Canada. What had seemed like a distant island on the horizon to my left was actually my destination. 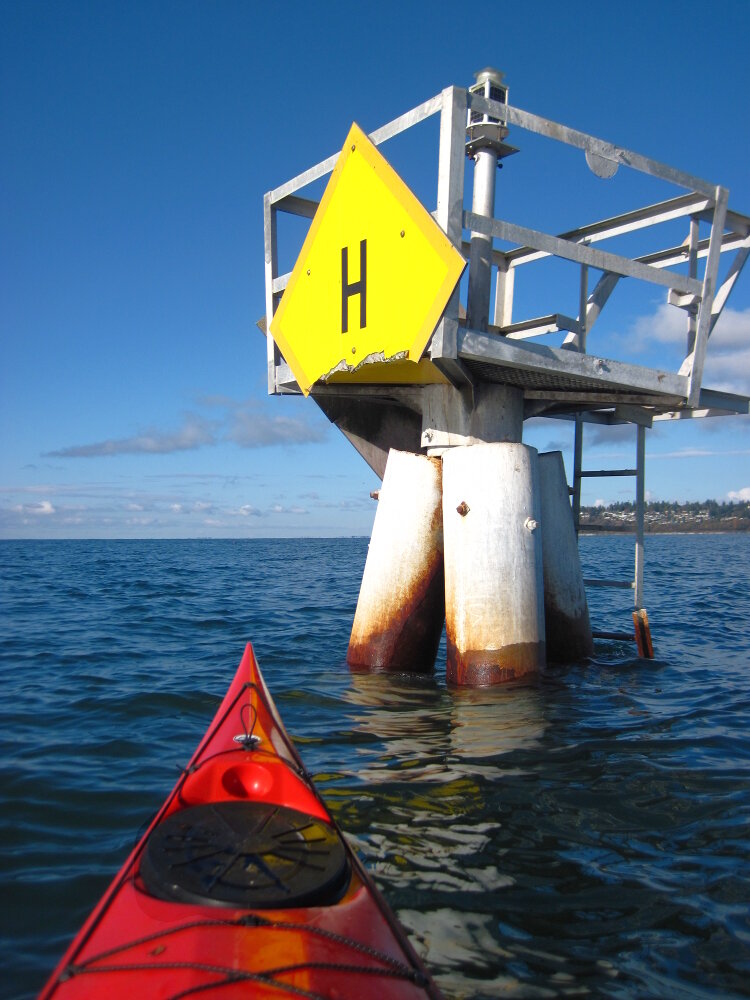 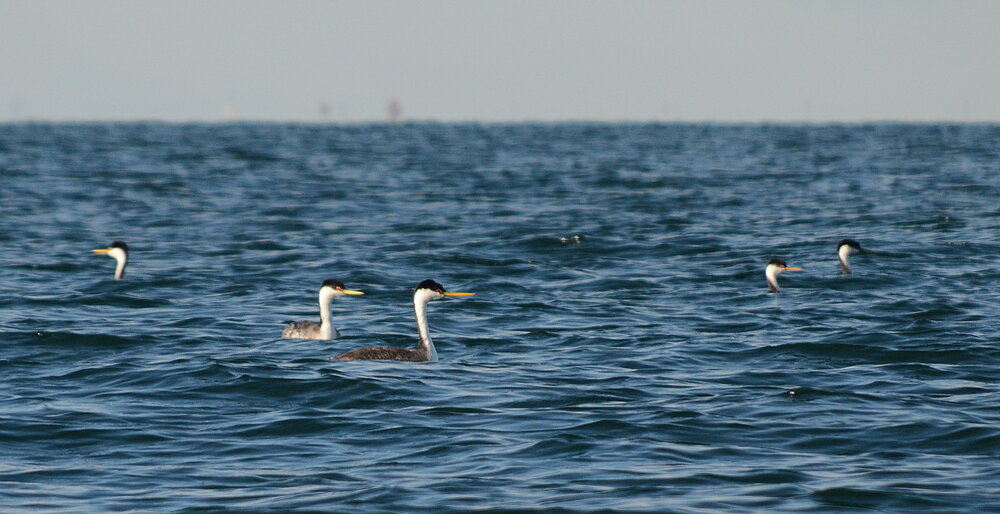 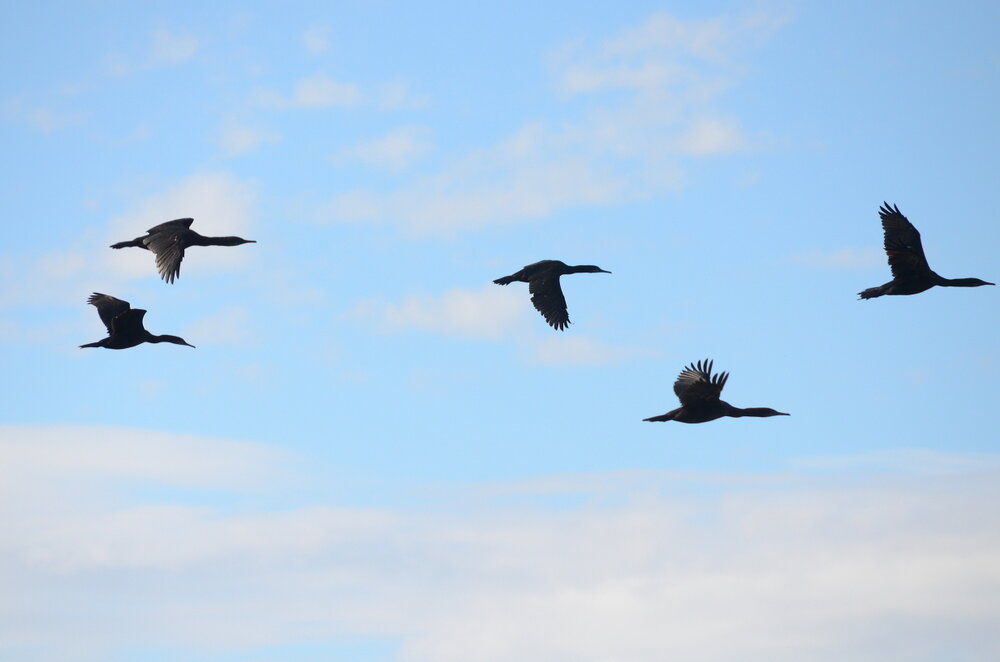 The search for squirrels delayed my start long enough that the strengthening Fraser outflow caught me still on the water in the afternoon. Wind kicked up to fifteen knots. Whitecaps and small breakers pocked the surface of Boundary Bay and the Strait of Georgia. I had forgotten my drysuit at home, but my new British sea kayak was so well behaved in the chop that my shirt didn’t even get wet.

A long cobblestone beach marked the landing at Lighthouse Park. The uplands consisted of grassy fields and Nootka rose bushes: perfect habitat for a northern shrike. I spent the waning afternoon hours birding on land.

Even though Lighthouse Park enjoys Cascadia Marine Trail status, signs at the park said the campground was closed for the season. When I knocked on the door of the ranger’s house to ask about a special dispensation for a stranded kayaker, there was no answer, nor when I called the ranger’s number on my cell phone. There wasn’t even a pay box where I could have deposited a fee.

I assumed the good people of Point Roberts would be less keen to welcome their exotic guest if they saw him camping illegally in their park, so I waited until dark to set up my tent, not in the campground where a patrolling ranger might catch me but right on the beach, like a real kayaker.

To make up for my bad behavior as a guest—and to spare myself cooking a pathetic dinner, huddled over a campstove in the merciless northerly wind—I walked a mile up the road to Kiniski’s Reef Tavern for burgers and beer. I was the only non-local in the bar. 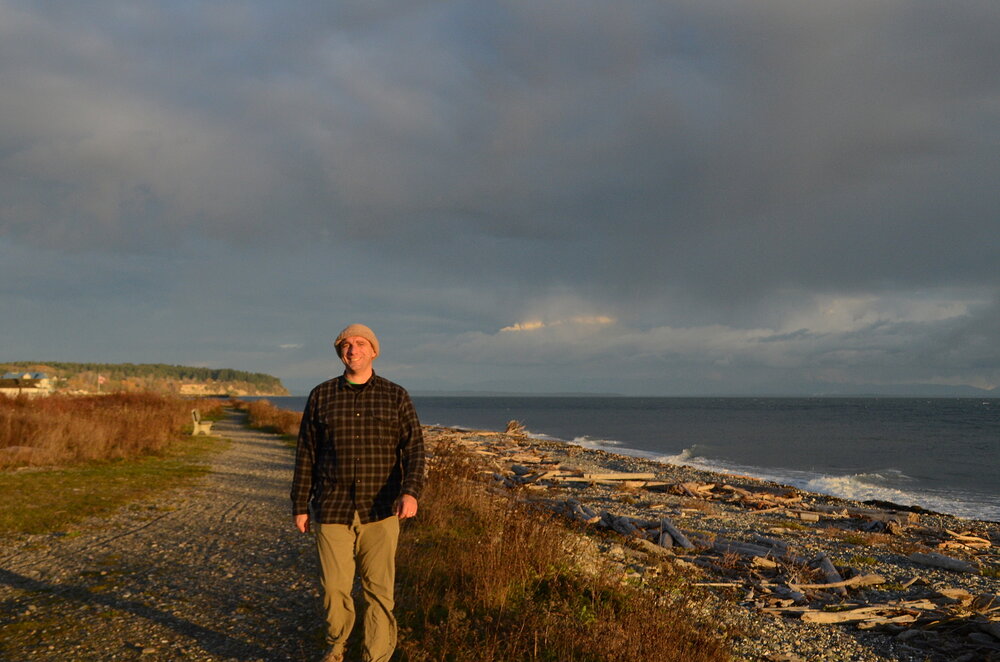 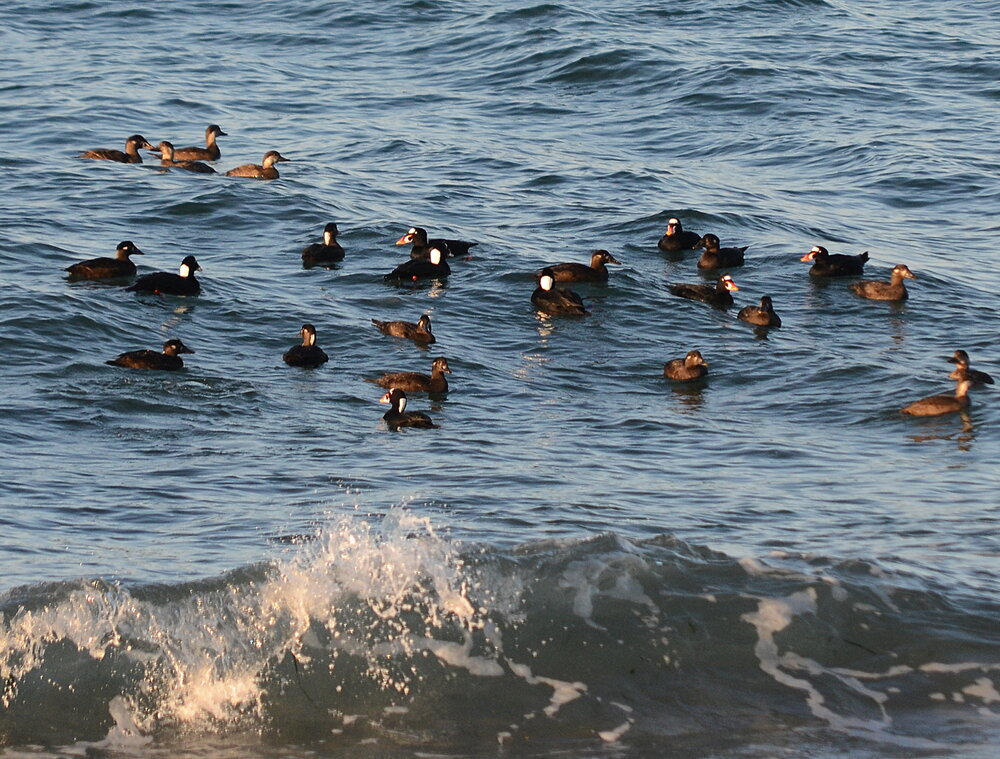 Even in the face of such gentle wind, the fourteen-mile return trip took five and a half hours against the current. Pages 6, 7, 8, 38, and 39 in the Current Atlas would have illustrated the problem of the shifting current directions, but I had no more thought to bring my Current Atlas than I had to check my GPS before proceeding blindly across the international border.

The only thing to do during a long crossing against a merciless current is accept your fate and enjoy your surroundings. The ancient murrelets were even more numerous today than yesterday, and the mountains came out from behind the clouds on all sides. Few boats or planes were abroad so close to the border, so I was alone with the waves and the birds—just where I like to be. 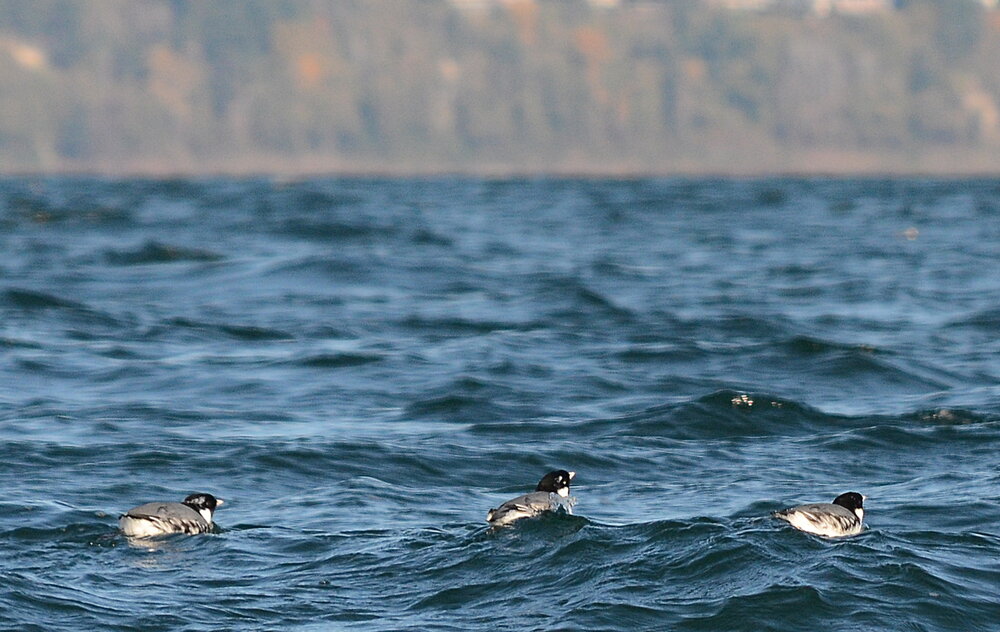 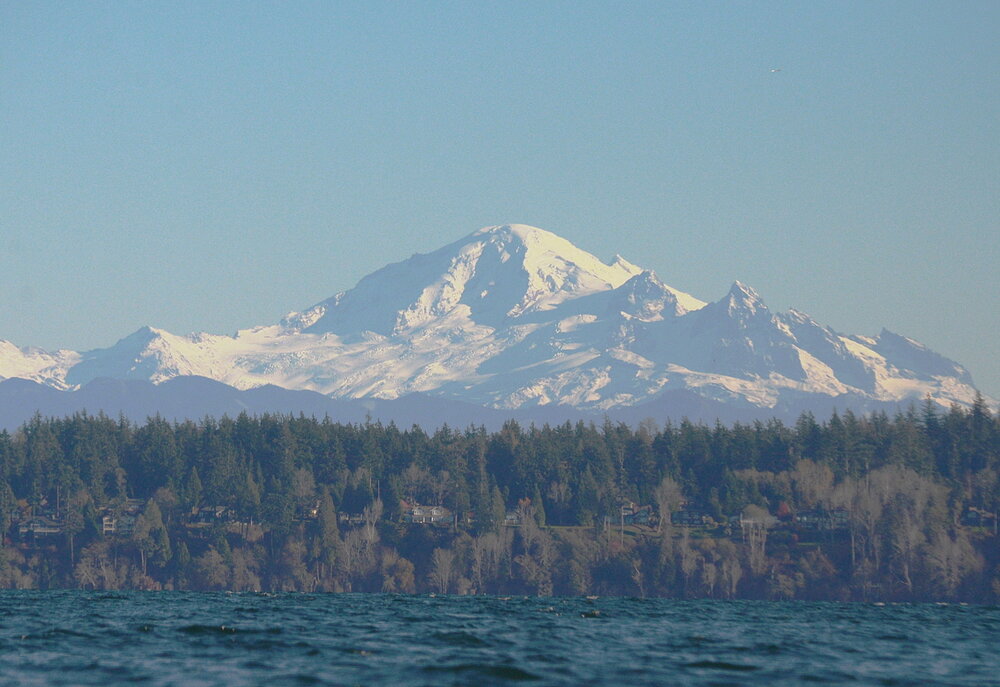 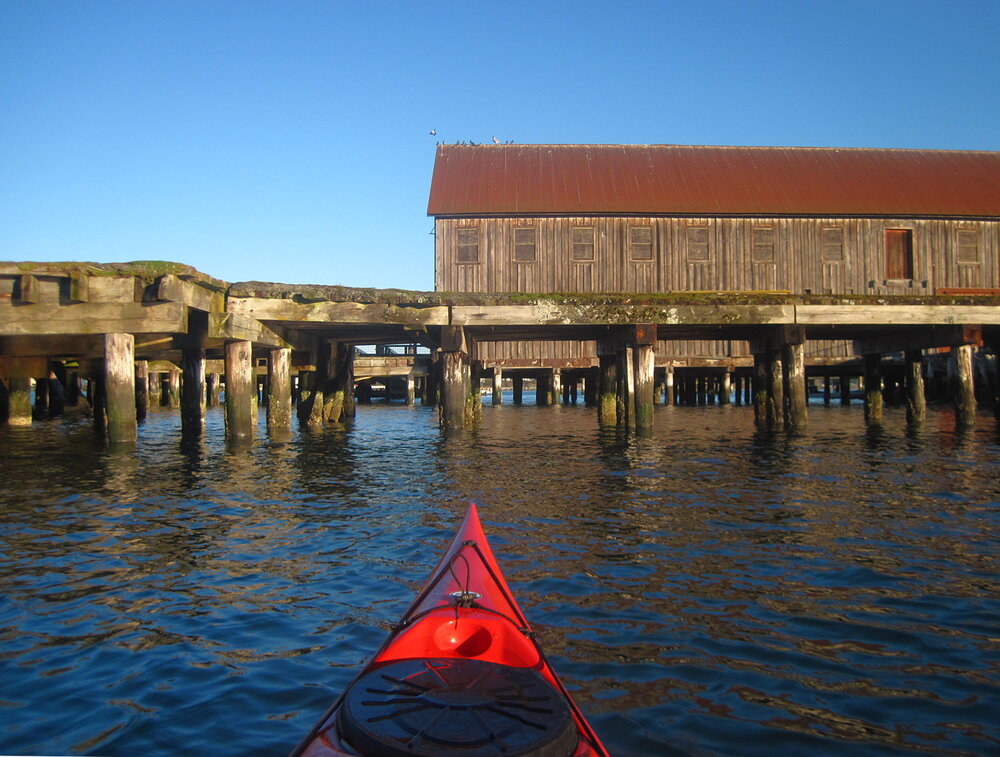 Just before I departed Point Roberts on Sunday morning, a local stopped me on the beach to ask me about my trip. He seemed to think I might be a day visitor out for a little paddle around the point. When he learned I was going all the way to the mainland, he was flabbergasted. He had been out in his motor skiff the day before in the strong breeze and chop, which had convinced him it would be an act of insanity ever to venture far from shore.

I left this incredulous bystander on the beach and headed out among the seabirds and sea lions, proud to have become one of the few kayakers to reach Point Roberts.

A nice TR. I have enjoyed paddling in the San Juans.
I did not see any paddling clothes for cold water. I hope you were wearing some.

Outstanding report! From my perspective, you are a real Kayaker.

Alex gets around. If you haven’t yet take a look at his website : https://alexsidles.com

He is also active on westcoastpaddler.com

Thanks for the kind words, everyone, especially Jon, whose blog 3 Meter Swell is one of the last, great kayaking sites still standing!

To answer PPine, I was not wearing a drysuit. Normally, I would wear one for a November crossing of this magnitude (14 miles total distance, and over four miles away from land in the middle of the crossing), but as I mentioned in the TR, I had forgotten my drysuit at home. In the event, winds did not exceed 15 knots, and at no time did I feel in any danger.

Until you capsize and die.
People die in the summer every year in Puget Sound due to the water temperature.
By November you are playing Russian roulette.