I did about 7 miles on the St Joseph River yesterday. The river is down about 8 feet from peak flood levels but it’s still full with a respectable current around 3 mph. Somehow I had a headwind the whole way even though the river twists and turns. 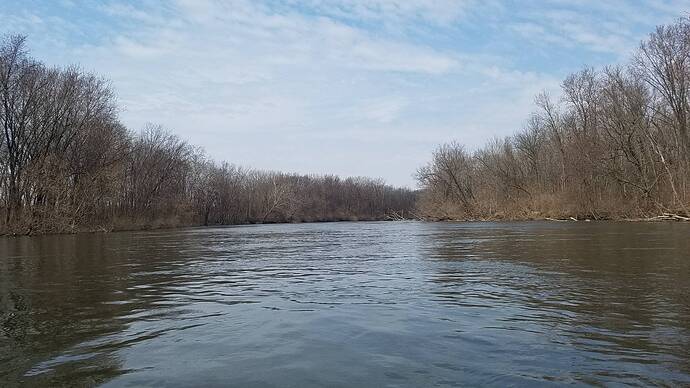 The river is high enough that you can sneak in and paddle among the trees in places. 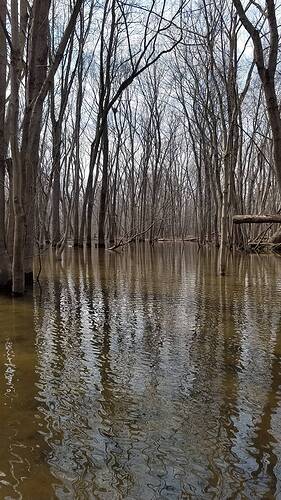 Some of the big trees seemed white. I don’t remember this from previous years. 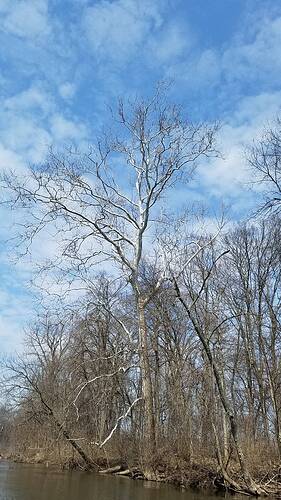 Lots of evidence of flooding, like the branches suspended from the crotch of the tree below. 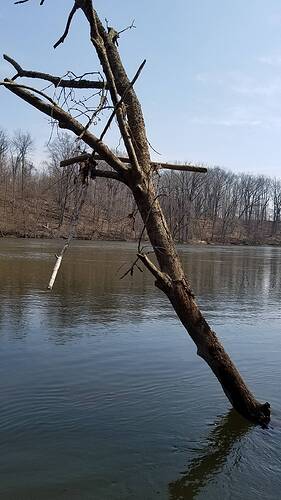 I’m not positive but those two big trees on the shore sure look like they floated to where they are. 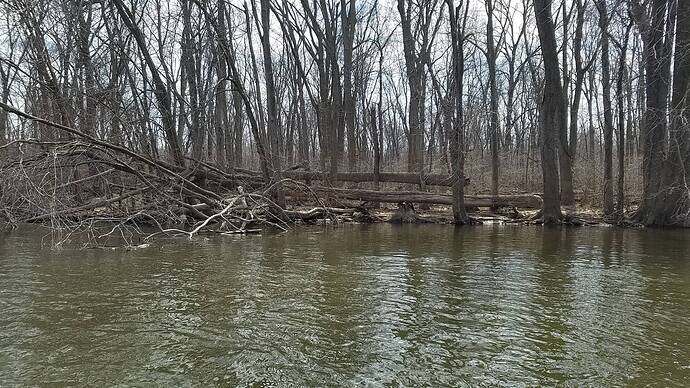 The larger a Sycamore grows it sheds the grey bark and looks white. The tree in the photo looks like a Sycamore. Your photos look like winter here in SC. I am posting a photo of a log caught in a Sycamore tree after a big flood on the Enoree River. Yatipope and l did an overnighter on the river a few weeks after the flood. 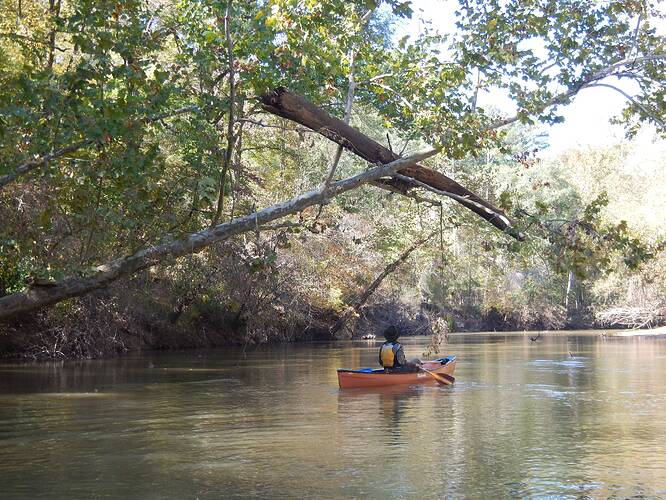 Thanks castoff, I did not know those were sycamores. Some of them were really dramatic and whiter than my picture suggests. I missed a lot of good shots yesterday due to the current! 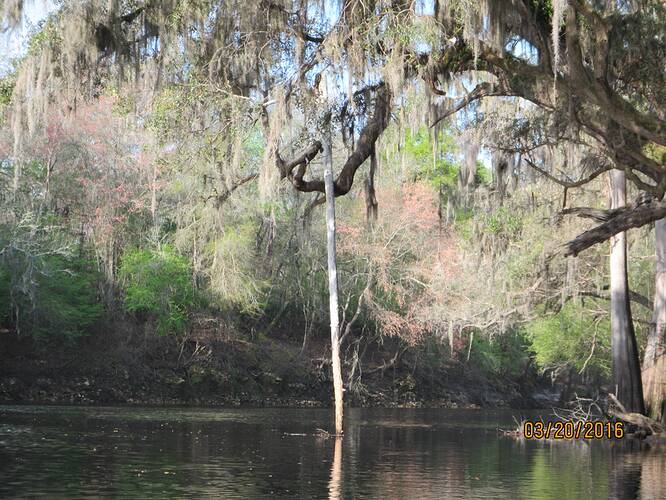 great pics from Overstreet and castoff!

Tom I enjoyed your photos too. Those two trees down in the woods I do believe got left there by the flood. The river looks a lot more tame than the ones you posted during the flood.

Funny how no matter which way you paddle, there always seems to are a headwind. Probably nice to have current though. I remember paddling the Pemigewasset up in Woodstock, NH after the floods from Hurricane Irene, and seeing what was left of a small pop-up camper trailer stuck about 10 feet up in a tree. Floods can be amazing.

We snuck out again today since it was almost 70 with possible snow forecast for Monday.

Pic below is a narrow, long island in the river that is now covered with sandy silt following the high water. The closest big sandy lump is a beaver hut and it will be interesting to see if it’s still occupied this year. 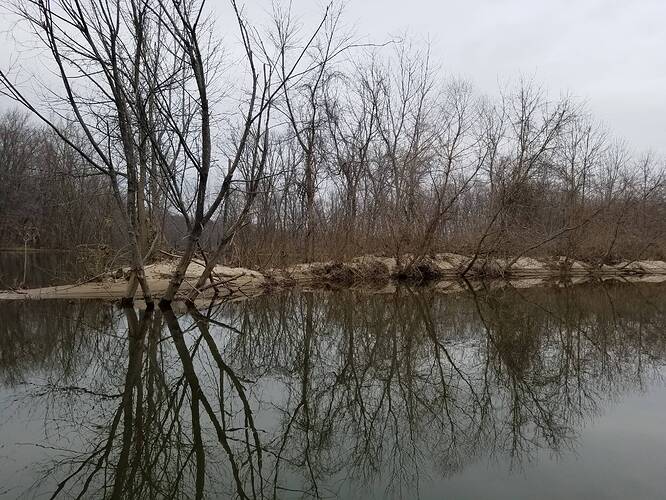 Also found another tree that sure looks like it floated into it’s new home. 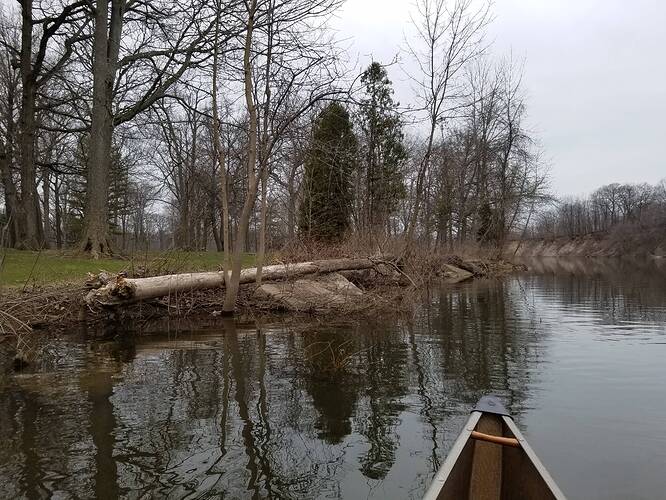 Rivers in flood stage can toss huge logs around like tinker toys.
They can also sweep thru campgrounds, and gravel bar campsites that the foolish considered safe from flooding.
Not too many years ago, 8 to 10 people (or more) died in one night, when a campground on the Buffalo River in Arkansas flooded in a matter of hours. 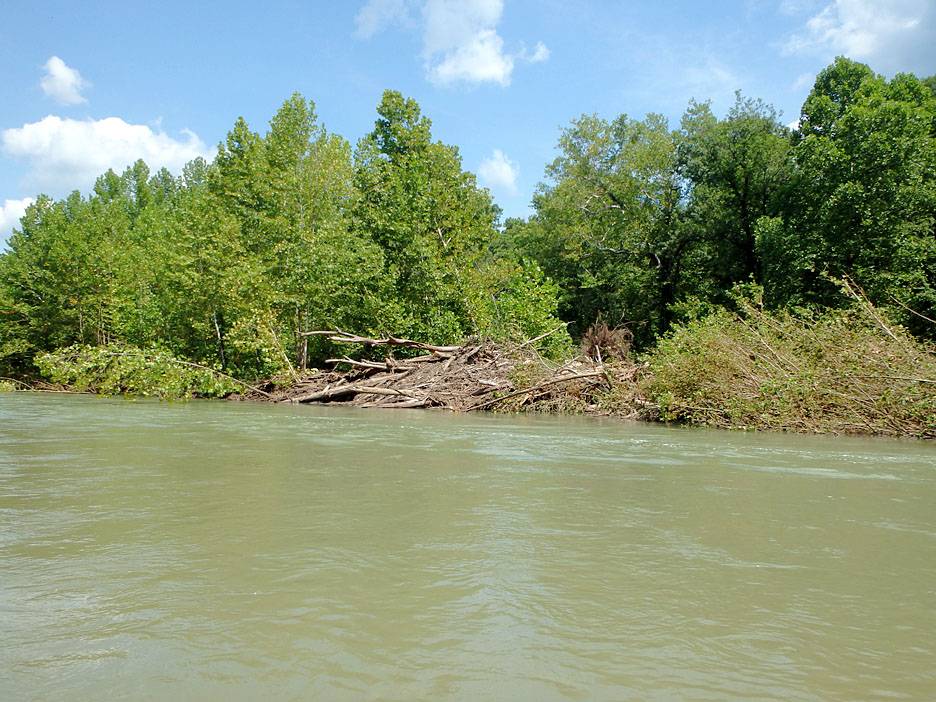 Some rivers are flashy, and some are not. We have some of each within easy driving distance, with a couple of the flashy ones capable of becoming raging torrents in the space of a couple of hours. Though I can’t swear to it, this one looks to be in terrain that would not promote flashy conditions. A word to the wise never hurts, of course. Any feedback, Tom?

@Guideboatguy said:
Some rivers are flashy, and some are not. We have some of each within easy driving distance, with a couple of the flashy ones capable of becoming raging torrents in the space of a couple of hours. Though I can’t swear to it, this one looks to be in terrain that would not promote flashy conditions. A word to the wise never hurts, of course. Any feedback, Tom?

I don’t have much experience with super flashy rivers but it’s easy to believe that things like the hardness of the ground and whether there are dams and how flat the banks are could have big effects on flashiness. We got a bit over 2 inches of rain recently and the St Joseph river jumped up 2 feet in 2 days. On my two closest rivers (the St Joseph and the much smaller Paw Paw) the biggest danger seems to be (lots of) fallen trees that create confused currents in spots, or bump you from below just as you cross an eddyline, or grab your paddle and jam it against the boat. Sometimes the Paw Paw is impassable due to downfall…it’s one continuous strainer. They recently found the kayaker that went missing on the Paw Paw 43 days earlier.

The overwhelming thought that hits me is how easy it is to underestimate the potential danger of a situation and that warnings from other people may get shrugged off until you’ve had a few scary experiences for yourself.