Interesting talk on puffins tonight on NPR. Just heard a factoid l did not know about the decoys on Eastern Egg. Turns out they are not just there to confuse paddlers who take photos of the birds. They were first put out to increase enthusiasm for the early birds returning to the island to stay when they came back after some years. They work, they replenish the decoys fairly regularly.

Also just passed by that the whale watching boats out of Maine are having to go to Canada a lot to get a sighting. Too little food in the Gulf of Maine for them.

Glad you are having good weather for your last week at the cabin. Wish I was there as well – was wistful all weekend thinking about how nice it must be in Maine and also having had to cancel and miss Michigan Qajaq Training Camp last week due to the obligations here with turnover at my rental house. Nice weather here too, almost like early fall, but I’ve been stuck indoors building closets and doing plumbing and electrical repairs. Hoping by next weekend the new tenants will be settled in and I will be free to take the new canoe out.

Views of the Maine coastal cove Celia’s cabin is perched above (and one of the sailboats she mentioned), sketched from the screen porch while I was visiting her last month (sprayskirts and dry tops hanging in the breeze). I bunked on that porch, with the loon family calling during the night and the chugging of the lobster boats going out to round up the pots for a morning alarm clock. Magical place! 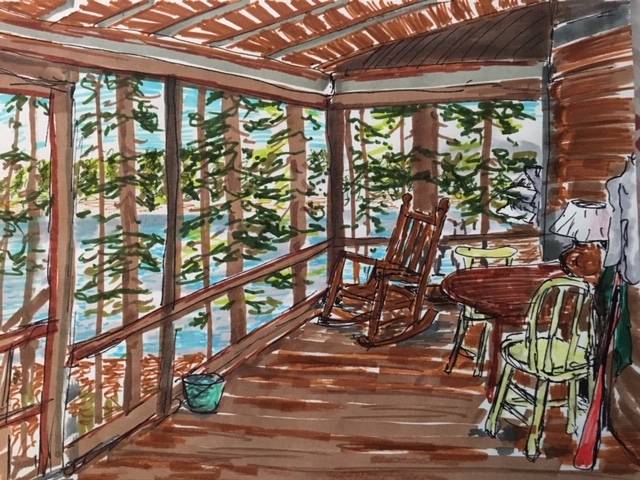 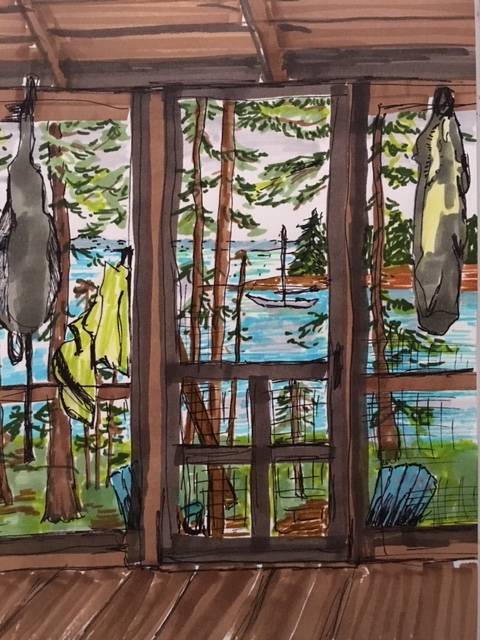 This year has been a banner year for puffins on Eastern Egg Rock… There is a research station there and the count was 178 birds… the highest in recent years.
We went to Monhegan on the ferry from New Harbor and saw six floating on the ocean , They are done breeding and nesting and raising.
That said the seas are warming and the future for the puffin looks iffy. This year the researchers have found that they do have the ability to switch diets. Formerly they went for herring ( the same thing that lobstermen use for bait and its in short supply this year) Now they are adjusting to warmer water fish like redfish

So no there is not too little food in the Gulf of Maine for them at least this year… Other years have been different. I did not hear the NPR broadcast and wonder if it is an old one.

Machias Seal Island in New Brunswick has always had the most puffins as it is strictly protected and quite isolated… It looks like part of Maine … Grand Manan is similarly situated and some of the tours emanate from Seal Harbor Grand Manan NB.

The broadcast was on Maine Public. I think current, they were talking about the puffins on Eastern Egg having a great year. The whale thing was on the tail end of the broadcast, no mention of food issues this season for puffins. I missed anything about their being able to switch food supply. That is good news for the alewives too if it sustains.

That said, again and again the greatest threat to puffin populations has been food supply. The commentators can’t really discard it as a worry for future populations,

I haven’t been out to Eastern Egg since Jim passed, because after sitting on the water in a kayak with the chicks bobbing all around you and flying by your nose l just can’t see looking at them thru binocs from a big ship. And that is a four person, perfect weather all day paddle from here because of the open water stretch to the Egg. Haven’t had the paddlers here to do it even if l had gotten my paddling endurance fully back up. Which will be next year, eldercare issues of the last 2 yrs finally got to a decent place.

Did not make the Monhegan run out of New Harbor this season, but it is a great ride for birds. Last year when l went out we had a major bird person on the top deck spotting birds for us plus what the captain saw. I think the ride out of New Harbor is the perfect way to get there. Absolutely going to make it out this coming year.

The NB location sounds neat. At some,point,l have to get up there.

Always been a little curious about the big old hotel on the island too. Sense that it could he a really nice couple of nights.

Celia that would be the Island Inn… Elevates sitting to an art form … You pick… ADK chair or rocker
The rooms are small no elevator ( needing a hip replacement I did the stairs as few times as possible)
Rooms are not air conditioned meaning the windows are open which is lovely except below our room there was a private home with a yappy dog. Also there was a street light that because it was hot we could not draw the blinds against… We suggested to the owners of the hotel that they install light shields like they have in Bar Harbor that direct light down and to the side only…

Prices are kind of up there but not outlandish… We actually had a top floor corner room with two windows and a private bath for $285 a night breakfast included… And it is a nice breakfast We were there three nights. It is BYOB as they are not licensed to sell liquor… This is no big deal as the “novelty” store is a wine store and wine is available in at least three other stores. So the markup on wine is about five bucks as opposed to five times as much.

No TV no Internet.

Fun to watch the kids jump off the ferry dock.

the little cuties did not require binocs… the ferry went by them about fifty feet away… Just like little rubber duckie puffins.

Agree the ferry gives you better access to the puffins than the tour boats with 60 people running to hang over the side, as long as they are around. I will do something about seeing puffins this coming season even if it can’t be a kayak trip to Egg.

Thanks for the tips on the Island Inn. No TV in the rental so it is paddling and reading. Would not kill me to have no internet for a wknd. Probably no phone, or some cell coverage? Window situation not likely an issue because if I can pull it off it’d have to be at the outer bits of their season.

Actually this thread got me thinking I can’t let this round end w/o getting out there. Just booked a round trip out of New Harbor for day after tomorrow. It’ll be likely showers am but I will be starting at the Museum. There is something terribly Maine about those cliff views with a bit of fog clinging around the edges and I need to get some walking in anyway.

The Museum was well worth scaling the hill with a soon to be replaced hip… We were greeted by the docent who asked me who was doing my hip. Turns out her doctor is my doctor… Now to me that is the essence of Maine… We constantly bump into folks we know on outings.

And the Island Inn does serve lunch. We were intrigued by the new all the rage Impossible Burger ( the veggie burger that tastes like beef. It does!). It is $13.00 and comes with home made potato chips and a pickle from our favorite deli in Waldoboro. No reservations necessary.

We ate there several times and I blame the Island Inn for my new craving for burrata… Within two days of returning home I was at Trader Joes buying some… Delish with a summer tomato , sweet onion , EVOO and thinly sliced fennel and basil…

They do have phones… They have tails… Yes hard wired phones… Cell service is spotty and 1 x never does well for data. Look for the lawn mowing goats on Manana Island . We took several walks and while I love cliffs I loved the walk to the shipwreck as it passed through fields of dandelion type flowers just teeming with Monarch butterflies. Some years ago we kayaked to Franklin Island and I remember the Monarchs there

@Celia said:
Interesting talk on puffins tonight on NPR. Just heard a factoid l did not know about the decoys on Eastern Egg. Turns out they are not just there to confuse paddlers who take photos of the birds. They were first put out to increase enthusiasm for the early birds returning to the island to stay when they came back after some years. They work, they replenish the decoys fairly regularly.

Now as I recall from the time we paddled out there with you, the decoy fooled me, and I took a few pics of it. Must be a good decoy

Celia, I am glad you’re continuing the summer tradition of staying in that iconic Maine cabin!

Willowleaf, you captured the feel of the place, beautifully. Thanks for sharing the pictures.

Thanks, PKBK (and Pmax). I took some photos while there but it was hard to get the exposure and depth of field right to show both the inside and the view outside, especially through the screens. Couldn’t do it justice with the camera.

Kayamedic, how/where did you land in Franklin? I have generally been there during the no land months due to nesting birds, but Jim and I never figured out how to land even if it was legal, That rickety structure on the north side never looked reliable, and haven’t ever seen a tide state with other options.

Wayne, you guys got tricked more easily. Mike S and I went around the east side to see where the puffins were, and the decoy of a 2 or 3 ft Arctic penquin was kind of a hint there were fakes.

O gawd Celia it was 20 years ago. My memory isn’t that good! We usually did our Muscongus trips in August and Sept.

OK, no problem. Landing on Franklin has always been tempting, and MITA seems to suggest it is possible. But MITA has a couple of sites in Muscongus where they seem to have a sense of humor about the landing part.

Oh yes, Little Marsh and Bar… The moons and tides must be celestially aligned and you must have eaten properly for a month and no storms must have passed by in the last week.