Purchasing advice on a fixer upper..

Young family with a 5 year old son looking for some adventures for the summer and we set our sights on a canoe…
Our neighbour who kayaks suggested we look for an Old Town Discovery model and while they are pretty thin on the ground here where we live we found an older Discovery 164.
It has the molded ergonomic seats ( would rather have webbed seats but thats a nice sunday afternoon chore ) I understand they came with rotan seats originally though these could have been put in at some point later - seller had no idea how old it was. Hull looks fairly decent overall.

Have not found out how much that deck costs to replace, and am wondering about that dent… 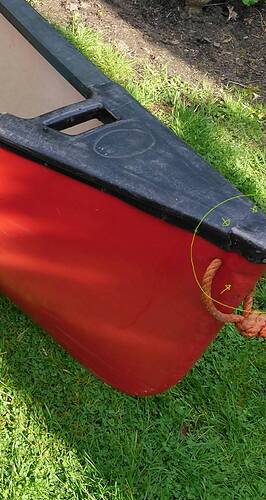 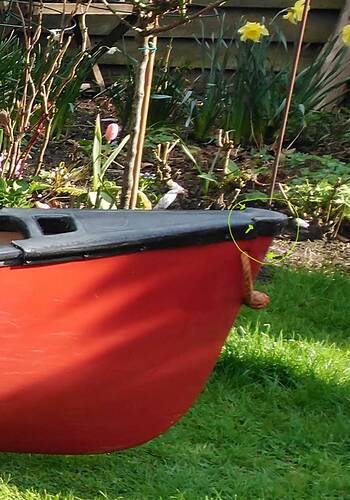 That dent is nothing to be concerned about and certainly nothing needs to be replaced unless it is falling off.

Look at the last 2 numbers on the HIN (hull ID number on stern) for year it was made. The damage looks minor, but use it to get a lower price. I believe it could get by without any repair.

It looks like they only carry the newer replacement decks. You might want to call and ask if this will work, so here is a link to the new one for a Discovery 169.
http://www.tgwatersports.com/old-town-canoe-replacement-top-plate-sport-a-rotoa/

Royalex and three-layer polyethylene rotomolded boats acquire dents all of the time and they usually are of no significance. The dent on that canoe is on the stem which is the strongest part of the hull.

Deck plates are largely cosmetic as well. The canoe does not need them for structural integrity. I would not bother with the expense of replacing the deck plate but put the money into something that makes a difference functionally, like better seats. the deck plate can likely be repaired using G Flex epoxy or Devcon Plastic Welder. You may need to drill out the pop rivets securing the tip of the deck plate to get the pieces realigned, then replace them.

Yep, the damage is way above the waterline so won’t affect boat performance. However it must have taken a good shot to create the damage so you should push for a low price since you will also get hammered on price if you eventually sell it. Good idea to inspect the rest of the boat carefully too.

good stuff thanks all! Yes those seats need replacing, and lowering… Already got some materials to make our own webbed seats - with some long bolts to make them adjustible too. And hope the HIN points so more towards 2003 instead of 1993 ^^… okay now to cook a meal for us three and mull things over and make a decision Promised our kid we’d have adventures in a canoe and judging by how thin these particular ones are on the ground and how quickly they go hope this is a good one that will deliver just that. Hope its not hogged…

I purchased a used Disco 169 almost 30 years ago. It was previously used by a canoe livery and took a lot of use. I had no problem whatsoever completely replacing the gunnels with cedar, replaced the seats with web seats and fabricated small decks made of cherry. Nothing fancy but it looks better than what was on it. It was a little project that took a couple of weekends in the winter. I still use that canoe for fishing and cruising relatively easy rivers. Those Discos can take a lot of abuse with no problems other than cosmetic. That is what it looks like you have.

Is it an optional illusion, shadows; doesn’t anyone but me see what appears to be several “ripples” in the hull, down below gunwales/decking on that boat?
To me, they stand out like a sore thumb…

As to making the seats adjustable with long bolts, I wonder if that’s a good method. You probably will find that you need to run the bolts through something like large wooden dowels at the very least (1" x 2" (rectangular cross section) hardwood pieces would be better), or even wooden “trusses” (go to the Ed’s Canoe website to see what seat trusses look like). Bolts alone hanging the seats from the gunwales are likely to be wobbly and pivot around a lot, eventually wearing out their contact points and widening the holes through the gunwales. I also question whether it would be better to sit that much lower, but that will be up to you. The good news is that seat height is easy to change, as you get an idea what’s ideal.

I’m not seeing the ripples… just shadow and light from shadows.
I’ve dented the bow and not from a significant drop. We store our boats on the second floor of a barn and sliding out if you lose control and the boat drops a few feet you typically have it land on its end … Those deck plates really are not strong Note no damage to the bow.

The most recent bow shot was through the fiberglass rock guard of our trailer… We had the boat too far back on the truck.

But my guess is that the boat was on the car and someone misjudged how close the garage door was.

Hi Bob - I played around with ‘curves’ in paint.net program to help see more clearly but I do not see ripples per se - that dent has deformed the hull a little on the bow though for a patch of a few inches around it it seems. If we’re up for the couple hours drive tomorrow despite both having come down with the flu we will se for ourselves I suppose… plus see what those little patches of white showing below the waterline are

If you want to patch that canoe, do you know what is required to bond to polyethylene? If the answer is no, leave it alone.

I was given an older Disco that had been left in the sun. There were cracks in the hull, but none that went through.
I filled them with G Flex and it is being enjoyed by my son’s family. No leaks.

@pblanc said:
If you want to patch that canoe, do you know what is required to bond to polyethylene? If the answer is no, leave it alone.

@Guideboatguy said:
…Bolts alone hanging the seats from the gunwales are likely to be wobbly and pivot around a lot,

Our Mad River has this with dowels. It wobbles around as stated. I dislike it, but haven’t done anything with it yet.

@Guideboatguy said:
…Bolts alone hanging the seats from the gunwales are likely to be wobbly and pivot around a lot,

Our Mad River has this with dowels. It wobbles around as stated. I dislike it, but haven’t done anything with it yet.

Yes I would most likely not rely on those bolts alone but also do something so the webseats are wedged in between the hull securely - probably another pair of bolts on each side under the cedar frame mounted in some L brackets with rubber tips so I can turn them inward or outward depending on how high the seats are mounted and the distance to the hull varies along with that adjustment so I can still wedge them in securely. Moulded plastic seats might last longer but for some odd reason the ergonomics of any ergonomic seat is never quite ergonomically enough to fit everyone lol… plus I would like some room to wiggle.

imo the trick to webbed seats is having the frame in a trapezoidal or rather slanted in a curve-shape with the slanted side on the inside - when your weight hits the webbing and the webbing sags in this prevents a sharp edge from being felt!

No need to be complicated with seat hangers … A solid piece of wood hung from the gunwales is a truss hanger. Bell used to carve them to be sorta pretty… One bolt through the front end and one through the back end… On each side four per seat.
http://www.rutabaga.com/eds-canoe-seat-hanger

I have them on all my canoes and there is no seat wobble at all. And I move around a lot

Forget about thermal welding. That works for single-layer, linear polyethylene hulls, not three-layer poly hulls. On a triple-layer poly hull and heat sufficient to melt the outer solid stratum of PE (which is what you are doing with thermal welding) will also melt and collapse the inner “foam” core of the hull material.

I very much doubt that you will be able to pop out that dent either. Usually dents of that type have already caused some crumpling of the foam core that will not be reversible. If you really want to get rid of the dent, your best bet is probably to fill it in with West Systems G Flex epoxy thickened with some silica powder. In order to get a decent bond to polyethylene, you will first need to pretreat the hull material by flame oxidizing it with a handheld propane torch. Instructions for how to do this are included with the G Flex epoxy kits. Once the depression is filled in (overfilled slightly) and the epoxy has cured, the surface can be sanded fair and flush with the surrounding hull. Then cover the epoxy with some spray paint that provides a decent color match.

If you are measuring for truss-type seat hangers, use the hole-to-hole distance between the gunwale holes. But that distance will be too long for the center-to-center seat frame spacing. To get the correct distance for the seat frame spacing, take a yardstick or straight edge and lay it transversely across the gunwales so that it is aligned with the gunwale holes for the seat that is closest to the center of the boat. Now measure from the other hole to the center of the straight edge. That will be the distance you want between the centers of the seat frames. I would take those measurements and call Ed or his wife to make sure he has what you need and are ordering the correct parts. Ed’s Canoe does make “Old Town replacement seats” but if I remember correctly, Old Town used a different hole spacing for their plastic seats than what they used for their wooden seat frames.

If you install new seats, I would not cut the frames so that the ends are jammed up against the hull. That can promote hull deformation or even cracking and with a decent seat hanger, it is not required. Leave a small gap between the ends of the seat frames and the hull on each side.

hm hadnt thought of that - good points pb Epoxy from West it is then… First let this flu pass and go for the drive this weekend and see for ourselves how good or bad things are… Yeah with the seats what I had in mind wasnt cramming them tight in there - just enough to not have them rock side to side - the front to back motion is fixed easily enough too without adding any stress on things.

Gooduck on getting rid of the crud. Took me almost a month.