When I arrive at a put-in point where I see that I need to use my cart to get my boat and gear to the water, it’s a fairly simple task to get the cart through the scuppers on my kayak and then load the gear and tackle into the boat. From there I can roll it all to the water, lift up, and let the cart drop out onto the ground…or even into the water.

My question is about getting that cart back under the kayak at the end of an outing.
If you have a partner with you this is not a problem. One man steadies the cart while the other lifts and maneuvers the boat onto it.
If you are solo this can be an exercise in frustration… and would probably be hilarious to an onlooker.

I think what I’m asking is:
Has someone already come up with some type of “kickstand” that will hold the cart in place with the posts aiming up at an angle that will allow the boat’s scuppers to be lifted over and onto the cart without having to offload all the gear/weight and then reload the gear once the boat is mounted on the cart?

I’ve never seen the sort of outfit you describe. However, I am imagining pegs on the cart which fit into the scupper holes from below. If that is the case, how about fitting a line to the top of two of those pegs, and threading them through the proper scuppers of your boat. Then, you lift one end of the boat while pulling the two lines (setting the two lines up as a single line that doubles back on itself would make this a one-hand operation), thus guiding the cart into place. If the pegs don’t drop into place, they will at least be close enough that a little shuffling of the boat would finish the job.

The part which would take some original thinking is attaching lines to the tops of those pegs on the cart, but where there’s a will, there’s a way.

I can think of some really good ways of blocking the cart so it stays put, but the modification would be bulky and probably not what you want. For something not bulky, I’d have to see what you have rather than speculating blindly. 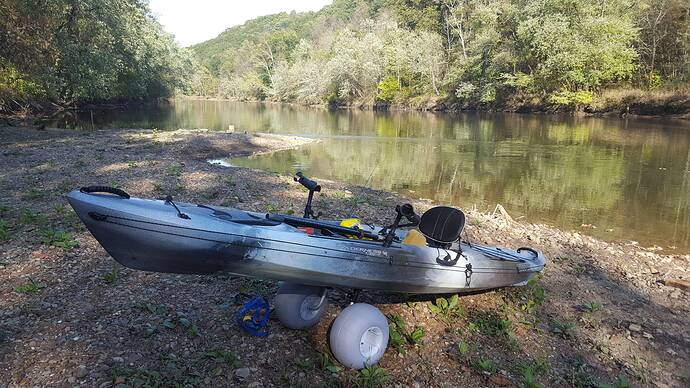 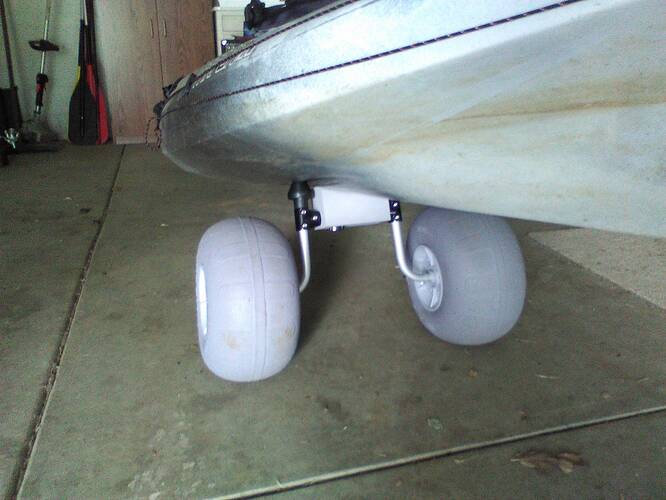 Thanks, Guideboatguy. That’s a new way to think about it. Not sure if I can make it work, but we shall see.

I’m attempting to attach a couple of photos here. I hope it works.

That makes it a bit more clear. I could see fabricating a stand of some kind, and there are a few ways that could be done. I think easiest of all would be to be able to manipulate the cart and boat together at the same time, which the use of a cart stand would not allow. With that in mind, can you simply turn the boat on it’s side to let you “plug in” the cart and then tip it back? One thing I might try would be to make a habit of coming ashore near small trees (with overhead limbs that are not terribly high), and simply suspend one end of the boat with a rope so that I could install the cart by hand.

Put kayak upside down insert cart strap and roll back over

He has the boat loaded with fishing stuff which he’s already said he wishes to avoid unloading. That’s why I suggested turning it on its side, as that might provide at least some chance of allowing most things to remain in the boat. Even at that, rolling the boat and cart back upright might be easier said than done, since many fishing kayaks with accessories weigh in at around 120 to 130 pounds.

That’s true.
This is a Tarpon 120. Empty, it weighs 67lbs.
With gear, depending on the purpose of my outing, the weight probably is nearly double that.