I just bought a 15’6" kevlar solo by Rainbow Boatworks. No model name. Anyone ever heard of this manufacturer? Gunwales very thin and made of wood, inside the shell only, adjustable Wenonah-type seat & foot brace. No floatation.

It looks & feels like a racing boat, tho kind of a flat arch bottom. Low profile stern. Haven’t weighed it, but it feels lighter than my Bell Magic, so about 30 lbs. Boat is at least 5 years old

Any and all clues helpful. Thanks!

Rainbow Boatworks
Was out of Newport Vt in the late 70’s early 80’s run by Dan Wing. It sounds like you have their FW racer. Dan was making some inovative designs and layups for the time.

Dan Wing
It’s a pretty nice boat. Thanks for the info. Think Dan Wing is still around?

I did an internet search
But didn’t find him. Would love to talk with him about the boat, especially since it was built in Vermont. Any idea where to find him?

Have not seen
Or talked to Dan in years so I have no idea. BTW I am guessing the boat is 25 years old if not older

Used to inspect Rainbows at the SE
Slalom/WW races back in the 80s. Haven’t seen any down there in a while.

Another Rainbow?
I’ve been told I too might have a Rainbow… would love to hear an opinion.

I worked for Rainbow Boatworks in Burlington and South Burlington VT in the late '80’s. This could be one of our Vermonter semi-vee hull designs, tricked up as a lightweight rec class racer. We did sell a few kevlar flatwater boats, both La Fortune designs. One was a competition cruiser at 18’6", and the other a C-1 at 16’9". I used to build them up from the hulls, and most of them had very thin 2-part rails. Again, we would build custom boats to customer orders, so there were a few that had one-piece ash rails of “L” profile, epoxied in place sometimes in the mold, to hold the shape. I have one of each of these in my possession, needing a little work, but really decent hand-laid hull to work with.

If you want to chat sometime, you can reach me by email at bobat2@yahoo.com

I picked up a very used Rainbow Boatworks Kevlar canoe that I am in the process of rebuilding.
It needs everything including a number of hull repairs.

It won’t be pretty, but it will be solid and functional.

Can anyone give me information about it?
I sent a message to bobat2… but have not gotten a response, I’m assuming that the 6 year old yahoo email address is dead.
Thank you
Russ 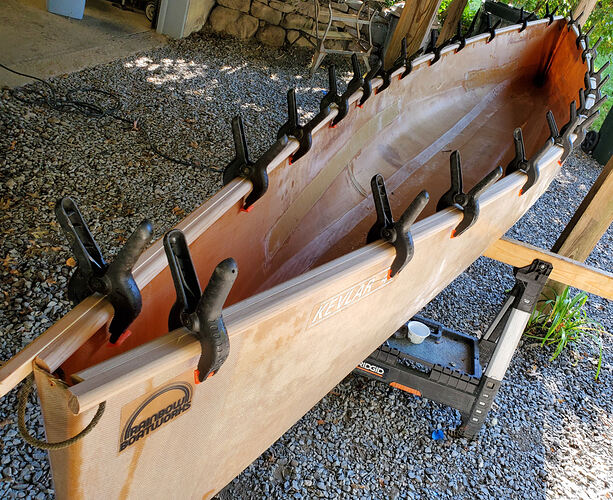