Rash Guard shirts what do you use?

I have a few NRS long sleeve rash guard shirts from NRS and a few Kokatat that are the heavier type. Anyone else make decent stuff? So before I hit the buy button for three of these https://www.rei.com/product/898412/nrs-h2core-silkweight-shirt-mens any other info is appreciated. For some reason I can’t even find any thing like these on Kokatat site except wool core I use for under layers in my dry suit. I do want long sleeve only. I see River Connection had some Kokatat: NeoCore; Long Sleeve Men but is sold out sadly. Thanks

edit just found Kokatat online for 26 shipped seems two good to be true wonder if it’s a scam? http://www.genuinestyle.top/men-c-1_9/kokatat-mens-neocore-long-sleeve-shirtelectricblue-p-10643.html With free shipping I am doubting this!

You might also look at the Patagonia Capilene stuff. I have a few that have lasted a very long time with no apparent wear. I’ve also had no complaints about NRS or REI stuff. REI is cool in that their stuff is guaranteed forever and can be exchanged if you ever have a problem. The Capilene is very light weight, even lighter than REI in my experience. I’m a canoe person so my experience does not include using any of it under a wetsuit or dry suit. Capilene used to be more expensive than anything else but if both your options cost $39 each then I suggest that you try a piece of Capilene.

I don’t wear cotton socks any more they suck

If I wear any socks with my water shoes they neoprene.

“Fashionshop” is based in Delhi, Indian. I would be seriously skeptical that those are actual Kokatat shirts.

Outdoorplay has the summerweight “suncore” shirts for $60 on Ebay.

Another reason I am suspicious about “Fashionshop” is that there are no online reviews and there is no address or contact info on the site – also they are using one of Kokatat’s catalog shots for the shirt. I suspect that what you would get would not look much like the real thing. I know people who have been burned by these Asian based clothing sites. Sometimes what they are selling is factory seconds made in shops in that country that failed the brand’s QC and other times they are just blatant knockoffs of inferior material and construction. Note that they don’t give full refunds (unless they have made a mistake in the shipment) and will charge you shipping for anything returned. You can tell by the clumsy syntax in the site text that it’s an overseas company, non-native English speakers. Caveat emptor.

I’ve always been happy with anything I ordered from Outdoorplay and they make returns simple. I love Kokatat gear but have found that the sizing on the tops tends to be somewhat variable. I have two women’s size L Outercore shirts and the one is several inches snugger than the other.

I got one NRS silk weight from LeisurePro and the Sun Core from Outdoor play both on Ebay. Thanks! Least I have 6 shirts now total. Thanks. 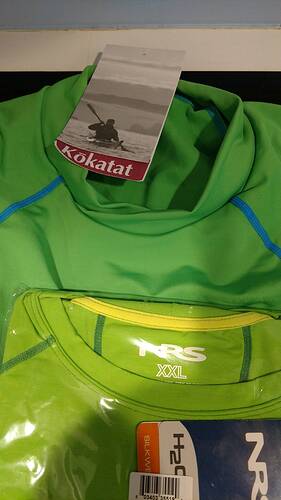 Second one kokatat came today never had one with collar like kokatat shirt.

I don’t usually like collars close around my neck, but I’ve found that my Kokatat shirts like that don’t bind at all and are quite comfortable. They cut their stuff well.

How do those collars work under a neck gasket? The tops I wear almost have a turtle neck and I do my best to roll/stuff it down so it doesn’t sit under the gasket and cause it to leak.

Mine (on the Kokatat tops) sit well below the top edge of the gaskets on my dry tops and have never interfered. But I have a fairly thin neck – it would undoubtedly be different for each person. .

Kokatat was longe.r so when I tuck it in my pants it stayed. It is form fitting it is 50 percent Spandex. Collar war comfortable doubt it will interfere with neck gasket. Sleeves were nice

@PaddleDog52 Betcha you meant something slightly different in the above post.

@Celia said:
@PaddleDog52 Betcha you meant something slightly different in the above post.

Gotta admit it took me awhile to stop laughing when I read it.

What what what you talking about