Recommendation for kayak camp trip off coast of Maine

Me and a few others are looking into a kayak camping trip some were off the coast of Maine this summer. Probably a 4 day trip maybe a little longer. In long 17 plus kayaks. Big waves not a problem. I have never been in the area so totally clueless about were to go. Paddling up to 30 miles in a day is fine. Not stuck to Maine could be off coast of Mass. too. If you have a idea’s on a trip were to park the cars for several days would be helpful. Thanks

There are some 300 islands off the coast of Maine along more than 300 miles for camping or day use… Most of them allow camping and some are private open only to MITA members ( and there are island monitors) The Maine Island Trail Association puts out a guidebook describing the islands and also danger areas and launches where overnight parking is permitted ( not all launch ramps do allow it).
With tidal ranges of 13-24 feet and concurrent tidal currents 30 miles a day is very ambitious… Fog is often the determining factor and you really don’t want to be in pea soup when the lobstermen are tending their traps. TIdal currents can run 2-5 or more knots.

The MITA guidebook is worth the price of membership. $45 and only one of you would have to have it. ( the fee hasn’t changed in years!) I am not going to try to suggest all the info it has.

However a starting point is Old Quarry Adventures which is a kayak launch and kayaker camping area for before and after your trip with parking… Its just outside Stonington.

Me I am sticking to the Stoningon area and Naskeag ( a fine launch)and exploring that again… ( live about three hours away). I would like to camp on Doliver.
Or Isle Au Haut but you do need reservations for that, The circumnavigation of IAH is a good challenge.

Thanks for the info I will get that MITA guidebook membership .

I also recommend the Maine Island Trail. In the summer of 2016 three of us did a week trip from Stonington to Jonesborough. We launched from Old Quarry in Stonington and island hopped up the coast, camping on: Wheat, Pond, Crow, Dry and Stevens. The area around Crow was especially beautiful as it’s off the coast of Acadia National Park. I was surprised at how few paddlers we saw along the trip once we got out of the Stonington area.
As Kayamedic suggested, pay attention to the weather, tides, currents, lobster boats and fog. We had to stay an extra day at Crow due to a frontal system bringing high surf and winds. I also came fairly close to being run over by a lobster boat who was paying more attention to his traps and not enough on his surroundings.
I’d also suggest paddling up the coast as the prevailing winds in the summer are from the southwest. Also, the MITA guidebook is a must have. 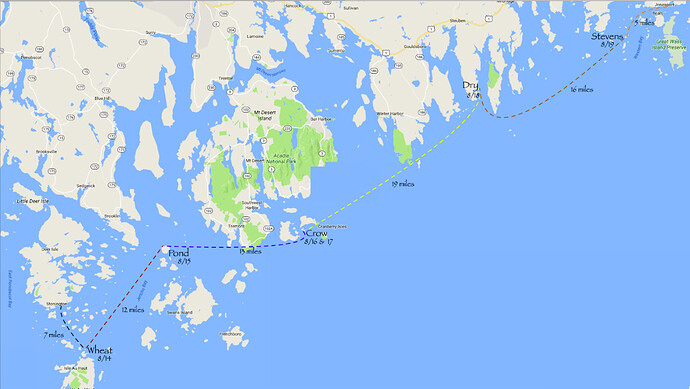 yup DownEast Maine was named in the time of the schooners… Going east you were going downwind… We do have easterlies but those coincide with storms.

Salt water is different. I did a trip in the San Juan Islands of WA near Canada. Somewhat similar, Cold water requires PFD and dressing for immersion. The tidal range is large with lots of islands and channels. That means lots of current and tidal rips forming in your lap. Learn to read a tide table and travel when conditions are in your favor. Thirty miles a day is a dream unless there is no wind and you are really good at predicting the currents. The speed of the current will easily overcome your ability to paddle if you make a mistake.

Salt water always means large power boats, and some commercial boat traffic. We were out there with the State Ferry and its 5 foot wake. Ships are intimidating.

Fog and lobster boats have been mentioned already. You’ll want a real handheld air horn. A lobsterman might still not hear you over the sound of his engine, but the chances are better than with a dinky whistle.

Every boat needs an air horn. It has saved my life.

Just to note, this original post is from over a year ago. I expect the paddling trip has already happened.

Good thing, frankly trying to come from outside the state and do a trip like this in Maine this summer is going to be more than challenging. Maybe impossible unless staying with someone sho already owns a place.

The questions are still valid and may save someone else .

Some of the options on the trail mentioned above do not exist this year because of the virus, including one across the way from where I stay. Plus longer of these trips often involve landing at harbors for fresh water etc. I just read some more details around that this year. Usual access cannot be assured.
And current news about access to campsites on islands off of Massachusetts, been looking at the situation in that state because it impacts someone I know who has a rental property.

So frankly no. A decent bit of what may have been useful last year is not any use this year. The only broad one that is still in play is to join MITA for updates.

What private island owners do is always at their discretion and changes annually anyway.
We have a trip planned with a small group all Maine residents the first week of June.

Islands should be open to non residents July 1.
https://mita.org/mita-and-covid-19/

The private island I am talking about has not changed since it opened and, w/o the virus, would not have this year. They developed it to create some minor but regular annual income and would have kept it that way if they thought they could handle short term use with the concerns this season about quarantine. They would not have invested in creating the camp sites or an onshore facility that is normally available to the campers for occasional use.

LL Bean is going to be able to use it because of their nature as a coherent group. Who LL Bean can bring in is their problem.

I have used a couple of spots owned by private individuals over the years including two spots on islands. I have nor experienced an annual change in either of them. Perhaps annual changes are more common outside of the Muscongus area.

I have camped on the island you are next to and also have MITA guidebooks from 1997 on
Islands come and go for various reasons. Some as Whittum
and Butter are from a change in owner
When I ran on a MITA monitor boat we had to keep up to date on the current islands we had access to so we were sure to be thorough
At any rate I dont care to partake in a discussion amd all I know is that BPL islands wont be available to non residents till July
Havent checked on my very close to home Goslings MCHT holdings : different organization