Recommendations for a Kayak to take your dog out on.

To start out i’m a novice at kayaking and looking to purchase a kayak for some recreational use. I’ve looked at several hardshells but haven’t found one at a reasonable price that would fit myself and my dog (black lab, roughly 90lb’s". I’ve read some good things about inflatable kayaks, but never used one so I am a little skeptical. If any of you fine folks have a recommendation on a particular kayak, or can just share your experiences with kayaking with your pets that would be great!

I can’t think of even a recreational kayak that has a big enough cockpit to accommodate a paddler and a 90lb dog.

I suggest you look at a Sit On Top…or even a canoe.

Hello Kfbrady. I should elaborate a bit. He’s mostly tall not round. I saw this particular kayak and in one of the reviews a gal also had a brown lab which seemed to work.

Kinda’ depends upon how much and where you intend to take the dog. We are limited by “gator” water. Our 83 pound, stands up after and hour and unsteadies the boat, retriever isn’t going into swamps, rivers , etc where gators frequent. But that is different than most of y’all.
.
In flat water we put the dog on the back of a SOT fishing kayak. The paddler gets a work out and the dog is happy to go. In the summer, we swim the dog before getting in the boat. The fishing kayak has scuppers that squirt water up when putting on some speed/power stroke. Paddler and dog is a load for a 12ft boat. If he’s wet, and cool, the squirts don’t bother him. He has his own kayak but he can’t paddle very well.

Towing the dog in “his” kayak is cumbersome. He gets tired of it all and just swims to shore. This kayak makes a better drink dispenser at parties, ice & cans.

Ocean Kayak, Tetra with dog in back. 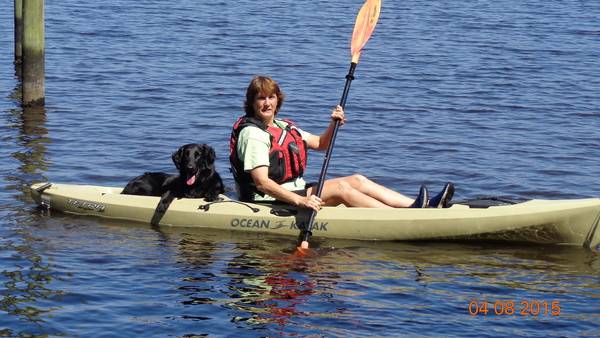 If we were to take him regular I see a tandem with the center hatch removed making a dog cockpit. We also put him in a canoe. Lots more room in the canoe. Of course when 80 pounds of ballast gets antsy your boat trim gets disturbed. The canoe tends to be too much room to move around for ours. We did an instructional video on this which remains hidden in the files for the moment. Might post later.

There are some recreational kayaks with sit in extra large cockpits that many put the dog in also. But the lab might be too much. There are though some SOT tandems that might do the trick.

Hello Overstreet, thanks for sharing! I’m in the North so it would be rivers (no gators 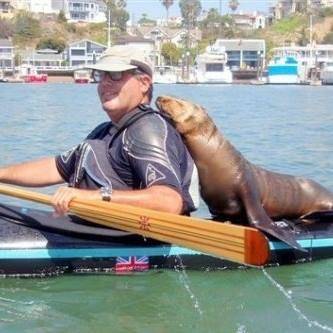 I think what you really need is a canoe if you insist on bringing a large dog. Check out the Old Town Next. You can probably get away with a SOT, but I doubt there is any rec kayak that has a cockpit than can fit you and your dog, nor do I think you want to paddle with a 90 lb dog in your lap even if you could fit it in there.

I have a 75 pound 2 year old lab pit. I have SOT, recreational, and 2p canoe. My dog seems to prefer the recreational (leaving me no room for my legs) and canoe to the SOT, perhaps he doesn’t feel secure enough. I am currently looking for a small 1 person canoe for trips with him as I find many large cockpit recreationals. May just be my dog but that’s my experience with the situation.

Thanks wsammut! Ya too much space is something i’m trying to avoid as he would definitely be moving around a lot.

@Haugs said:
Thanks wsammut! Ya too much space is something i’m trying to avoid as he would definitely be moving around a lot.

Then your safest bet would be to find a cheap small rec kayak for the dog and tow it with whatever you’re paddling, lest you both wind up in the drink. There’s a guy who does exactly that when he fishes on the lake where I live. His dog’s kayak has a water bowl attached inside the cockpit and the dog seems quite content.

Also consider a PFD for your lab, especially if it’s overweight.

thought about a tandem? I have a Necky Manatou II that will adapt from a single paddler use to a tandem with room for a dog in the rear cockpit opening. The only major downside to the manatou is that it is heavy to carry (over 70 lb.) .

These folks take their large dog with them all the time. They are paddling PBW Rapidfire pack canoes. Probably not the price range you are looking at, but their videos will give you an idea of how a large dog fits in a canoe. Plus their videos are just fun to watch. Mike & Molly Detviler & their dog Willey. They have a whole bunch of videos on YouTube.
https://www.youtube.com/watch?v=u-mDbQcr2UE&t=15s

Well here is a Mill Creek 16.5 from CLC. You’d have to build it or look on the used market or commission a builder.

EXPLORER FAMILY 630 By Aquarius makes a 3 seater. Not sure about getting it here to the states as they are located in Europe.

Sit on top, and allow for the weight of the dog in capacity. Or a canoe. But before going there, do you know if your dog would find this pleasant or be anxious the whole time? Just because Labs like swimming to retrieve a stick does not guarantee they will love sitting on a kayak in small bouncy stuff for extended periods. Or that theyI

The big thing I have learned is that dogs like to feel safe and a slippery deck be it canoe bottom or kayak deck makes them feel insecure which means that they will move all over seeking that secure footing.
Second is that they hate standing or sitting in water.
I put scraps of those blue foam camping pads on my deck under the bungies and thick foam pads on the canoe bottom. Problem solved! Until you haul a Lab and he sees ducks!!! 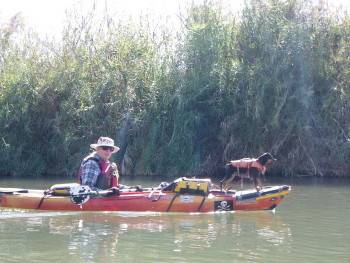 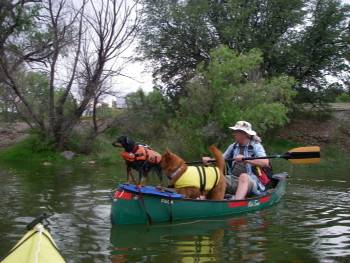