When canoeing first became a serious interest for me, in the late eighties, one of the big players was Sawyer canoe, which is no longer in business. They had a design philosophy that was different from Wenonah, who I would consider their fiercest rival. Since Wenonah is still in business and Sawyer isn’t, you might assume that Wenonah’s design philosophy was the correct one. I’m not so sure.
I always wanted a Sawyer, but they went out of business before I reached a point where I was willing to spend that kind of money on a canoe, so I can’t really speak with any certainty about their canoes or their design philosophy.
But I believe the canoe that has the least resistance (drag) at 6 mph probably isn’t the same canoe that has the least resistance at 3 mph. I always thought that Sawyer was aiming for less resistance at a slower speed than Wenonah. Which design philosophy you prefer is a matter of taste.
I should probably try and find a nice used Sawyer, but I imagine hey are becoming scarce.
https://www.bing.com/images/search?q=sawyer+canoe+images&qpvt=sawyer+canoe+images&form=IGRE&first=1&tsc=ImageBasicHover

I bought a Sawyer tandem in Hopewell, VA in 1972. My wife and I paddled it on the James River. It would wind up in Houston in 1978. We had 2 kids by then so I sold it and bought a Folbot Super kit .
FWIW

Not so rare in Michigan. There is a Cruiser that lives at my house & there was a Summersong with us on the Manistee on Friday. I know where there is a DY Special and also, several Shockwaves. More around as well. there is a Sawyer Facebook group & links to For Sale boats often show up.

If you have two canoes that are identical except for scale, (same waterline length to waterline width, same prismatic coefficient, same hull contour), the bigger boat being longer will have the greater theoretical maximum hull speed.

The smaller boat will have less skin friction and will often be easier to paddle at “cruising” speed. It will also be easier to accelerate for the same reason and because it will part less water.

A lot of paddlers seldom or never paddle their canoes up to and over maximum theoretical hull speed so smaller boats often seem more responsive and easier to paddle.

I think a lot of Sawyer’s success was due to the fact the David Yost designed a lot of their hulls, at least the faster ones. But Sawyer had a lot of designs including some nice recreational hulls.

Here is a thread in which you can find a lot of old Sawyer catalogs:

I think Sawyer, probably through David Yost, went for a lower(?) prismatic coefficient.
The faster you expect a boat to go, the fatter you want the ends.
The slower you expect a boat to go the finer you want the ends.
Sawyer ads, at the time, seemed to indicate they had pinched in ends.
Then, of course, there is length to width ratio, surface area etc.
I’d just like to paddle one of Sawyer’s better boats and see if I prefer it over a Wenonah.

DY designed for a particular paddler in mind and not a mathematical goal ( his Fire boats had some that were not high in prismatic coeffiecient)
Not sure what happened to Sawyer in MI but Sawyer Canada morphed into Swift Canoe which is the most prolific canoe company today in North America and DY still designs for them
Back in the 80’s there was demand for hard tracking boats. the need for speed

I bought my Sawyer Summersong for $200. It was a mess, had been painted brown, poorly done patches on the bow, stern and both sides. I stripped the paint off, sanded it down (lots of sanding), then I primed it and spray painted with automotive paint. This is how it came out! 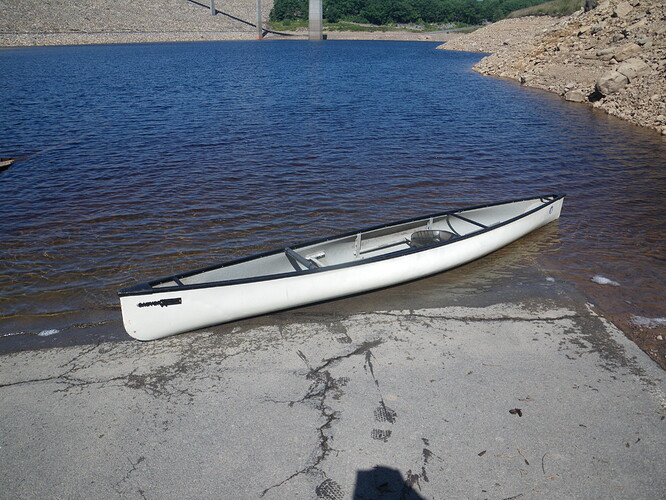 By the way, it is quite fast.

My first canoe 40 years ago was a Sawyer cruiser. It was fast but sliced right through waves.

I had a Sawyer Charger from 1978 that was made of kevlar. It was the fastest, lightest and most seaworthy canoe I have ever paddled. Great load carrying ability at 18 1/2 feet and 15 inches deep.

I have a Summersong as well. It is pretty fast but not as fast as a Wenonah Advantage and probably not the best choice for larger paddlers.

The Sawyer Shockwave is faster than the Advantage but much less versatile. It is more or less a Marathon racing solo.

I do recognize the reservoir behind the Francis Walter dam on the Lehigh. I used to go there to test new outfitting on whitewater boats.

There’s not a lot of them here, but they definitely are here. There’s been a couple of Cruisers posted in the Denver area this past year, and there was a cruiser in Durango for sale for quite a bit of the spring. I picked up a Summersong in Rifle a couple of years ago. I just scan Craigslist every now and then.

A Cruiser would have been great. A summer Song or Autumn Mist would have been even better.
I did check Craig’s List a couple days ago and didn’t see anything.
Not a top priority, but if I saw one in good shape and they weren’t asking a ton of money, I’d pick it up.
Right now, I’m not sure where I’m going to put my next boat. I have a row boat and a racing kart on one side of the garage and three canoes and three bikes on the other side.

I believe the Summer Song was for smaller paddlers and the Autumn Mists for larger.
My theory, yet to be proven, is that a Wenonah, like the Advantage, would be faster if you are a strong paddler really trying to make miles but a Sawyer would take less effort to maintain an easy cruising speed.
At my age, I’m more for maintaining an easy cruising speed.

We have an 18-1/2’ Oscada (Sawyer’s value brand, a bit heavier and not finished out as nice - but basically having Sawyer proportions [according to the dealer]). It is a fine boat for carrying a lot of gear.

I think you are right on all counts
Makes sense with Wenonahs racing heritage but the longer the hull the stronger the paddler has to be to get it up to hull speed.
Now ancient I can pisdle around for a few miles and be happy. Before anything under 10 miles was a fail.

The Sawyer heyday was before my time, but Sawyer canoes and paddles are ubiquitous here in MT. Most any second hand store will have a paddle or two. They must have been quite the company at some point.

Not sure what their current status is, but Sawyer was still making paddles quite recently, until at least three years ago. They may still be making them on some sort of limited basis… And they make really nice paddles. (Their cedar voyageur is a great canoe paddle.) They were badly affected by the fires in Oregon last year and seemed to be shifting away from canoe paddles prior to that - I don’t know what was going on, but places that used to carry them stopped. They listed new models of SUP paddles and had oars on their web page though…

A good friend of mine had an Autumn Mist that I stored for him. Nice boat. It was a bit shorter than the Summersong (which a member of our paddling club has one of). I have quite a bit of seat time in the Autumn Mist, but not the Summersong. I think the Summersong was reputed to be the faster of the two, if you had the strength to push it at speed.

I think that Sawyer the Paddle Company is/was different than Sawyer the Canoe Company. Oregon (paddles) vs. Michigan (canoes).