Removing the vinyl layer from Royalex

How do you cleanly and efficiently remove larger areas of the Royalex vinyl layer for a repair? I found several posts by ezwater who recommends a chisel, but I’ve done nothing but gauge the canoe with that method. I’ve had some luck with a palm sander with round disk (not random orbital) when I put it on edge, but it takes forever.

Any recommendations? If sanding, then what tool if any? What grit? Any other way?

I’ve never done something like this, but I do know that plastic tends to clog most sandpaper. I’d consider trying a block plane, set to take a very thin shaving. You should be able to retain a lot of control this way while still removing more material than you would with an abrasive.

If you’ve never used a block plane, it’s sort of like using a chisel but with a built-in guide to control the depth of cut.

Just curious why you would remove the vinyl? Are you going down to the foam, or trying to leave the ABS layer? pblanc will probably have your answer, just wondering what you are doing.

@eckilson said:
Just curious why you would remove the vinyl?

I am applying a patch.

I have use a wood chisel with some success on a convex surface like the exterior of a canoe hull. A concave surface is much trickier. The chisel must be held at a narrow, acute angle to shave the vinyl off. Sometimes it works well. But Royalex varies in its surface hardness and the stuff produced after around 2000 or so seems to be softer and more easily gouged.

I would try the chisel. I suspect the blade on most block planes would be too wide to work well, but you could try it. The body of the plane will obstruct your ability to see what it happening at the blade, however, and probably increase the risk of going too deep.

Sandpaper will work but it is time consuming. In theory, it is best to bond directly to the ABS rather than vinyl, since the vinyl layer could conceivably delaminate from the ABS later taking your patch with it. But G Flex does bond well to vinyl and if you can’t get the vinyl off without damaging the ABS significantly, I would probably punt and just bond over the vinyl. I have applied abrasion plates to Royalex canoes without completely removing the vinyl and none of them have delaminated.

@pblanc said:
I have use a wood chisel with some success on a convex surface like the exterior of a canoe hull. A concave surface is much trickier.

How wide was your chisel? Mine is only a quarter inch wide. Maybe a wider chisel would be less likely to gouge the underlying ABS.

I would use a disc sander and feather the edge. Chisels would work but you will likely gouge the heck out of it unless you’ve done it a lot. Yes it clogs the sand paper. That’s why you use coarse grit, 80, and change the disc a lot. I get the ones with a fuzzy backing that stick to the sander like Velcro. I get the 50 sheet pack. . I just came in from putting epoxy on one now.

Yes, I usually use a 1/4" chisel, unless the surface is very flat. Sometimes you can remove part of the thickness of the vinyl with a chisel, then finish up with sandpaper or a sander.

I’ve had success using a steel rasp. It cuts quickly and doesn’t clog. The rasp can take much of the vinyl off and what remains can be sanded.

https://www.amazon.com/Stanley-21-296-Surform-Plane-Regular/dp/B00002X1ZL
This surform tool works pretty well. Some clogging will occur, but it is easy to clean out. Surform makes a short curved one that works in many situations inside the hull. Very course wood rasp works well, too. I actually use one that farriers use to shape horse hooves. If you are using a disc sander look for the coursest grit you can find that will fit your machine. 50 grit is good and sometimes you can find 40. I use a brass bristled kitchen brush to clean discs when they clog up. Just ease it up against the disc while it is spinning. The soft brass will not dull the grit. It extends the life of the disc a bunch.
If you use a chisel or plane make sure you understand how to get them real sharp.

LOL… or just use a cheese grater. Similar result.

Kidding aside, the rasp/surform are great ideas. I hadn’t thought of that myself. The advantage worth pointing out is that the resulting surface will be very rough and should get great adhesion.

@sedges said:
https://www.amazon.com/Stanley-21-296-Surform-Plane-Regular/dp/B00002X1ZL
This surform tool works pretty well. Some clogging will occur, but it is easy to clean out.

Interesting! You’ve personally used that to remove vinyl from canoe hulls? I had to look up surform tool and I see they come in many shapes. I’m working on the inside of the hull all the way to its narrowest part. I believe a rasp would be too large to reach many spots.

Working all the way up in the end of the canoe is going to be tough. I would try a wood carvers gouge. It is still going to be hard to have enough of a grip on it to guide it. Another idea might be to shape a piece of minicell ethafoam to a radius that will match the end of the boat. Wrap the coursest grit you can find around it and have at it. It might be useful to remove the breatplate so you can work from the top some.

Yes, I use surform tools on wood, royalex and foam. It works good on wood that has weird grain where a plane would tear up the surface.

I’ve put many patches on royalex canoes, and I’ve never scraped off the vinyl. Mostly, patches were applied with West System epoxy, but have used g-flex more recently. Only one that is delaminating is one Kevlar skid plate. It’s one of those thick Kevlar skid plates and I suspect expands and flexes differently than the royalex, and, after ten years, it is starting to lift up on one edge.

In an early experiment using dynel, I applied a Kevlar skid plate on one stem and several layers of dynel on the other. Same epoxy, both ends applied over lightly sanded and chemically cleaned vinyl. The Kevlar is lifting and the dynel is hanging in there quite well. So, I don’t think epoxy over vinyl is the reason that one end is lifting.

I have applied many abrasion plates on Royalex boats and have frequently not made an attempt to remove all of the vinyl. I don’t know of any that have delaminated as yet.

I remove the vinyl layer before patching or applying an abrasion plate when it is fairly easy to do so. I am more inclined to do so when applying a patch to an area of structural damage. The reason is that I have seen many cracks in the solid stratum of ABS that were completely covered with intact vinyl and thus were not visible.

Here are a couple of examples, This canoe had suffered damage from one or more pins. A few of the interior cracks near the centerline were apparent due to longitudinal splits in the vinyl layer, but the majority of these ABS cracks were not apparent until I had removed the gray vinyl layer. In this photo, most of the cracks have been “guttered out” and filled in with G Flex moderately thickened with silica powder: 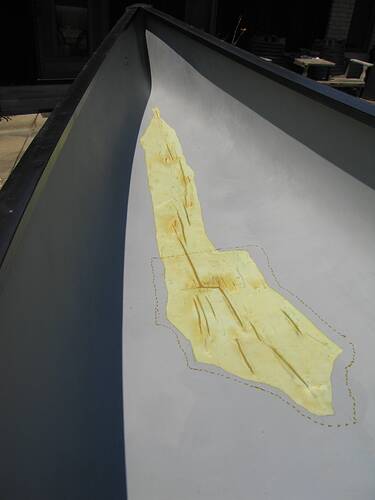 In this photo the circular area was where a vinyl backed D ring patch had been improperly applied using vinyl cement. Most likely, the cement had not been allowed to degas sufficiently after it was applied to the thick vinyl patch before it was placed on the hull, and then either acetone or ABS degassed into the hull causing the damage to the ABS layer. In this case, the vinyl layer under the D ring patch was discolored, but intact: 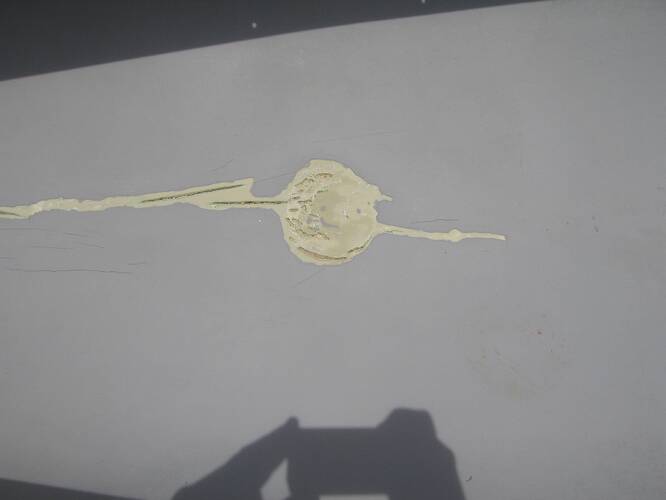 In this case, none of those short cracks in the circular area were apparent until I removed the vinyl under where the old D ring patch had been,

@pblanc, are the cracks in your second photo already completely beveled and that off-white stuff inside the cracks is the Royalex foam core? I’ve started beveling some of the cracks with a Dremel grinding cone.

I’ve pretty much given up on removing more vinyl. Not much luck with chisel or surform tool unlike some other people. Some luck with a palm sander on edge or a Dremel with various sanding attachment, but there is too much rope to hang myself with.

Yes. In the top photo the larger cracks have been filled and faired with thickened epoxy and I am ready to start laying on a Kevlar patch. In the lower photo the exposed cracks have been beveled but not yet filled, and there are other cracks which have not yet been uncovered.

Very interesting about the hidden cracks. It makes me wonder how cracked my boats are under the skin. I’m going to try to forget these pictures, lest I start de-skinning boats.

@BoozTalkin said:
Very interesting about the hidden cracks. It makes me wonder how cracked my boats are under the skin. I’m going to try to forget these pictures, lest I start de-skinning boats.

I agree. It does make me think about trying to remove much more vinyl despite my struggles. But how much? Since cracks could be anywhere, best to do the whole boat, inside and out!

I have a sneaking suspicion there were likely hidden cracks somewhere on many Rx boats before they were even sold.