I’ve never had to do any repairs to my boat, at least ones that couldn’t wait till I got back home. I’m not even sure what I’d use tape for unless I had a hole in my boat or perhaps a paddle that had a crack and I was worried about it flexing and out-and-out breaking. But in any case, I was reading something the other day about using packing tape rather than duct tape for kayak repairs because it doesn’t leave a gummy residue. Sound’s reasonable, but wondering if there are any dissenting opinions (and I guess there are 101 other types of tapes as well, some of which might be useful).

I carry a roll of clear duct tape, because if I need to repair, I am more concerned that it hold under adverse conditions than leaving residue behind. A thicker layer of adhesive is more likely to conform to irregularities in the damage. Vegetable oil or lighter fluid will remove the residue, then wash area with dish washing detergent and water.

I second Gorilla Tape. I’ve had a strip on my paddle for at least a few years now. It acts as a cover for a non-waterproof aquarium thermometer that I use for water temperature. For how much moisture and abuse it has taken I’ve been very impressed that it still seals out the water.

Duct tape is not near as useful as it’s made out to be. Even “outdoor” rated stuff doesn’t take UV well and in a year or two the mesh separates from the plastic, and the adhesives dry up and turn to this solid, dusty stuff that’s difficult to remove. It doesn’t stay stuck very well under water either.

I think I’d maybe take packing tape over duct tape, but water will seep underneath it fairly quickly and loosen the bond. Another one to try might be what I know as “Tuck Tape”. In these parts, it’s a red tape that’s used in the construction of houses to seal seams in vapour barrier plastic. This stuff is STICKY and doesn’t come off without removing some of the surface you stuck it to. I haven’t experimented much, but I’m sure there’s a solvent or maybe heat that would remove it.

Whatever you have, take LOTS of time to VERY thoroughly dry the area to repair. When you think it’s dry, WAIT LONGER. Trying to stick anything to a wet surface will just waste the repair resources you have with you. Definitely the first priority is to get yourself a repair that will hold up for enough time to enjoy the rest of your trip or at least get you home. Damage that’s severe enough to require tape is going to need some serious refinishing anyway so don’t worry about getting it off until later.

Duck waterproofing tape can be applied over wet materials. Only place I’ve seen it is at Walmart:
https://www.walmart.com/ip/Duck-Water-Proofing-Tape/17300800

I carry a roll as well as Gorilla tape.

@Rookie said:
Duck waterproofing tape can be applied over wet materials. Only place I’ve seen it is at Walmart:
https://www.walmart.com/ip/Duck-Water-Proofing-Tape/17300800

I carry a roll as well as Gorilla tape.

I was thinking you had a great suggestion there, until I checked out the link and read some of the reviews. Have you tried it out, sticking it to a wet surface yourself? There seem to be a few people commenting that it didn’t stick as it’s supposed to.

@Sparky961
Haven’t had the need to use it on a boat, but two years ago I applied it to a couple of large outdoor storage bins down at the lake which hold boating/beach stuff. There were cracks in the top of the lids. Tape is still there and contents are still dry.

I’ve used packing tape recently to cover a hole in the Rendezvous when it took flight (broke the bungees) in high winds and came down hard on something in my yard. I tped the hole to keep water out of the laminate until it warmed up enough to get the epoxy out. It did peel off & clean up nicely. I’ve been involved in using duct tape in the wild twice. Once on the Lower Missinaibi when the other paddlers high centered and pinned a foam core kevlar boat day one in Black Feather rapid. The other was our Cruiser in the Jordan on a family trip. It had ended up with the bow with a paddler and a kid in fast current in the river and the stern on shore empth between two cedars. I had landed the Indy and was almost to the boat when I heard the cracking. It was ugly. We got everyone out at the next bridge and then brother-in-law & I paddled back down, taped it up, and paddled it out. The duct tape was a mess to clean up but an angle grinder solves many problems.

6 days after Black Feather - ready for another tape application: 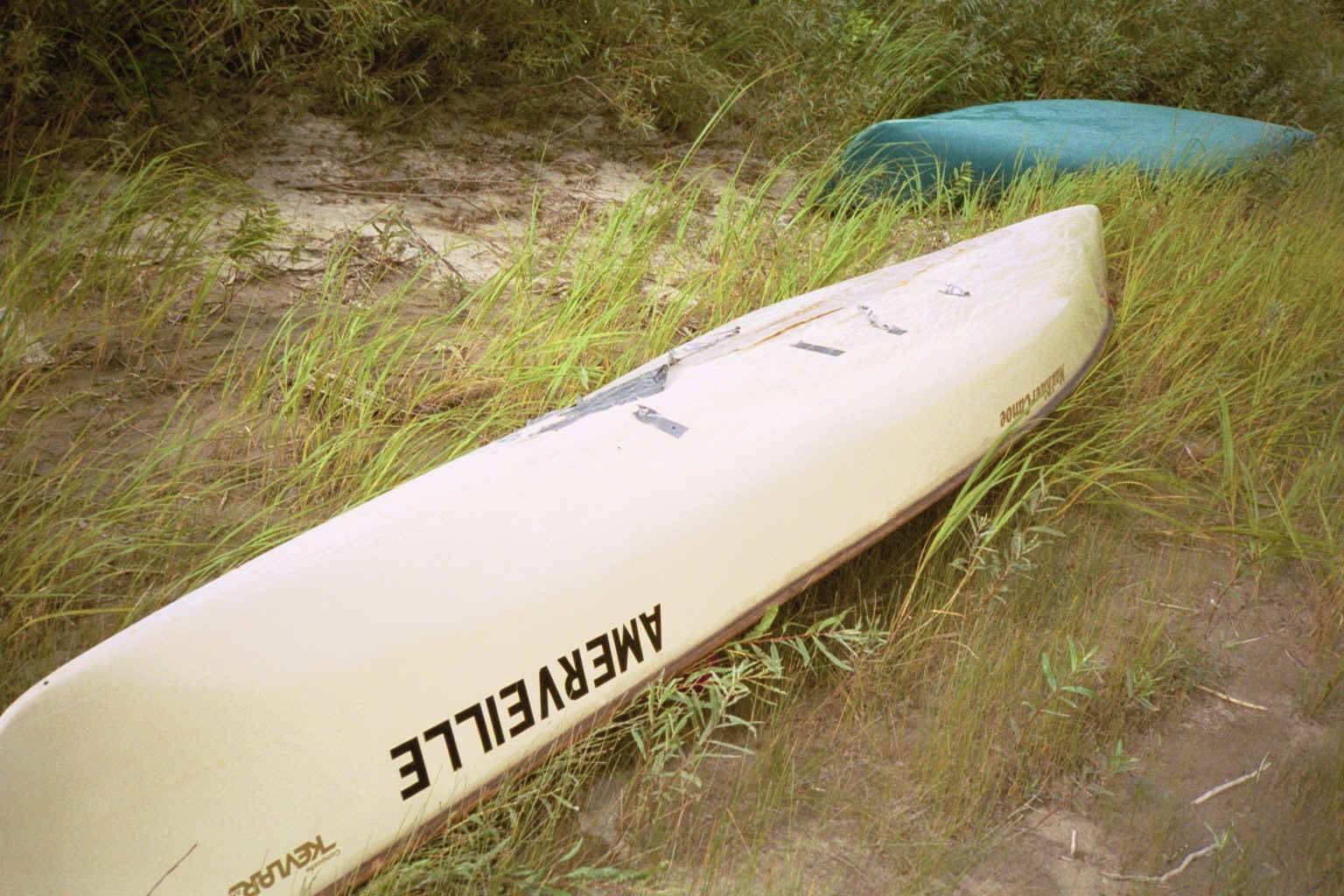 One view of the Cruiser: 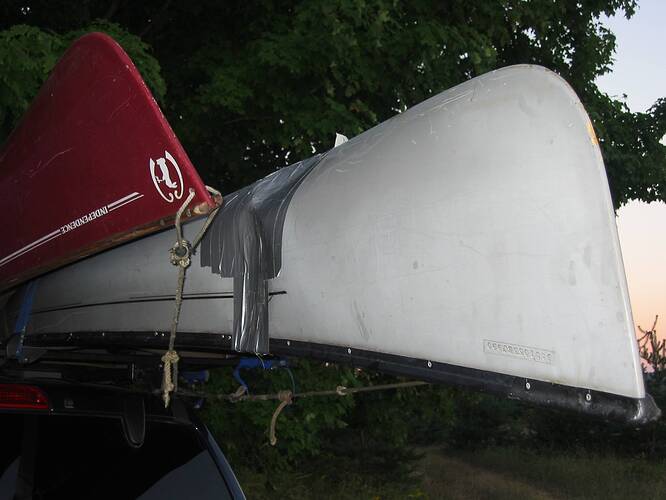 Among other things in the kit, I carry Gorilla tape and a cloth in a Ziploc to dry the area (when possible). WD40 removes the residue later. If you hole a boat and are unable to land promptly & dry the area, conventional wisdom (at least among Brit trained folks) was Denso tape. It’s a gross sticky mess but it works. Then I found Eternabond RV Roof Seal tape. Not as messy and it sticks tenaciously to wet surfaces.