I’m seriously considering taking out the old raggedy seat in my Alchemy and replacing it with something bare-bones simple. Any recommendations, kayak brothers and sisters?

I got a Jackson Sweet Cheeks for my Anas Acuta, and it’s probably the most comfortable kayak seat I’ve ever had. They were originally made for whitewater, but they’re every bit as good in a sea kayak.

The Happy Bottom seat from clcboats.com is bare-bones simple, and you can cut the back of the foam wings for a better fit in your cockpit. This is it in my Pygmy Coho. 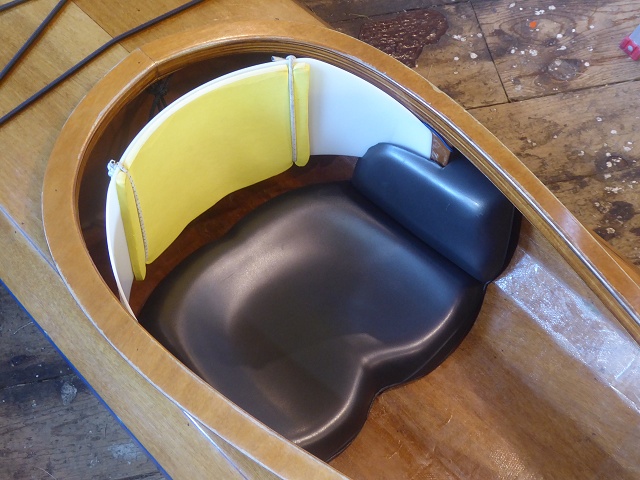 When I took out the uncomfortable seat that came in my Q400, it turned out the seat pan was pretty good, and a layer of Therm-a-Rest camp pad made it downright comfortable - it’s worth a try.

I never did look for something after that, although I had planned to try the sweet cheeks. I have a happy bottom pad in another boat - it’s pretty good, in my opinion, but doesn’t have much give.

I checked it out and it appears it’s inflated. Does it change your center of gravity at all? Does it affect hip rotation (can your butt slide on it)?

Am currently using a pad cut from Therm-a-Rest RidgeRest on top of my existing seat. Would like something with a little more cushion.

Many thanks for the suggestions. Someone mentioned this ‘bumfortable’ a while back. Any thoughts on it?

It all started with a pain in the bum . . .Everything else was awesome, my paddling skills were ripping, and I was paddling like the wind! But it hurt, my bum and my kayak seat just weren't getting along.There’s a famous saying: “energy flows where...

It’s a bag of tiny foam beads that you shape to the hull of the boat by hand, inflate it, open the valve, and then sit on it and wiggle your butt until it conforms to you and the boat. Then you suck as much air as you can from it, and close the valve. If you do it 3 or 4 times, you can get the seat pretty low where it makes contact with the middle of your cheeks. If the seat is secured in the boat, you don’t slide around because it’s shaped to you. I’d recommend the thinner version because the thicker one did raise me up a bit more than I wanted, but the thinner one feels fine to me balance wise.

Thanks for the update.

The Sweet Cheeks pad is as Wayne described. It came as standard equipment to pad the hard plastic seatpan in my Jackson Sidekick. It has a fuzzy texture which does not allow sliding, and it causes drysuit seat Cordura to grab and bind when rolling repeatedly.

I don’t much like it, but it does offer custom shaping. Beware that it also periodically has to be opened up and reshaped because the beans shift no matter what, after a bunch of outings.

It has Velcro to secure it to Jackson seat pans. Other boats would need some way of attaching to these.

Would not be my choice for replacing a SK seat, not if you roll a lot and wear a drysuit. It hinders rotation.

Thanks, @pikabike, for the comment it hinders rotation. Precisely what I don’t want.

Buy a block of minicell foam and carve it to your liking.

I tried several different seat pads (molded, foam, inflatable, Thermarest) in my skin on frame and none was really that great. Finally I cut a 24” by 30” chunk of the 1/2” thick old-school closed cell Ensolite I had used for years as a backpacking sleeping pad, folded it in half and shoved it in the cockpit, gunwale to gunwale, just below the Snapdragon backband. Presto. I paddle comfortably all day and when I have a shore break I pull it out to sit on.

I bought a Bumfortable foam seat some years ago (to try to get a whiny boyfriend to stop complaining about paddling making his butt hurt and back ache). It did not shut him up so I tried it myself but did not like how it raised my center of gravity and immobilized my hips. I passed it along to a youth outreach kayaking program to use to help fit skinny kids in larger boats. The Bumfortable was not cheap and I had a heck of a tine finding one — this was 7 or 8 years ago.

I had a Bumfortable for a while, to put in an SOF I built. I found it too narrow and it rose too high on the sides. It may be deformable enough to allow rotation, but I didn’t find out because it was just too confining.

The Happy Bottom pictured above works better in the SOF, so it’s still in there. I sanded down the surface as the butt impression was too narrow, I found the side ridges annoying. The hip pads are helpful.